Sometimes, we do things that some people believe are impossible, simply because we can see an opportunity and also because we can.

Very early yesterday, we uncharacteristically offered a prediction for stock prices in the immediate future:

For now, we'll note that the acceleration of the S&P 500's daily stock prices are very likely elevated above the level where the expectations for dividends in 2014-Q4 would set them, which means that stock prices will tend to be flat to lower in the immediate future, absent new noise events, a shift in forward-looking focus away from 2014-Q4, or significant changes in the amount of dividends expected to paid in that future quarter.

Now, let's look at the immediate past: 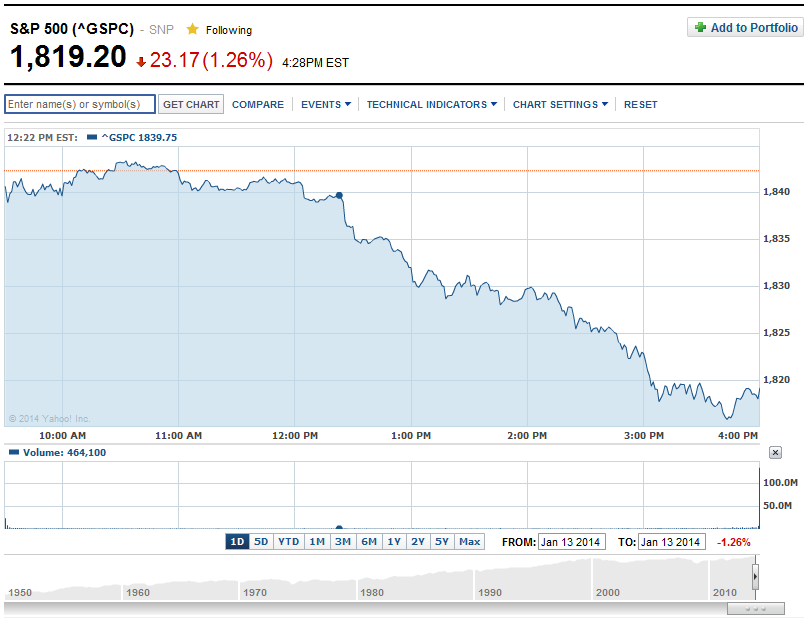 Well, the stock prices of 13 January 2014 certainly look like they tended to be flat to lower, in that order, in what was the immediate future when we offered our prediction.

If you follow the link we provided, it will take to you a similar snapshot at Google Finance, which while not making as nice a chart as Yahoo! Finance in our opinion, does offer something extra: superimposed flags on the chart that correspond to the day's major news events that are related to the stock market at the approximate time at which they occurred.

Note that there aren't any around 12:22 PM EST for 13 January 2014, which is approximately when stock prices stopped being flat and started being lower. That's a pretty good indication that there wasn't a market-moving news event (or what we would call a noise event) at that time....

And there certainly wasn't anything that caused investors to suddenly shift their forward-looking focus, away from 2014-Q4, to a different point in the future.

But there was a significant change in the expectations for the amount of dividends expected to be paid in that quarter.

The problem that some people have to overcome in all this however, is that this change was communicated very early in the day, at the market's open. If the market were really as efficient as they hypothesize, investors would have had to immediately incorporate that change in future expectations in stock prices.

And yet, it wasn't until the afternoon when stock prices finally reacted to that change in future expectations, in direct proportion to that change.

We suppose that one could argue that the market was being irrational, with investors acting to keep stock prices inflated all through the morning of 13 January 2014 as if in some sort of bubble. But that neglects the mere possibility that investors were acting rationally in response other factors, including their previous expectations that were coasting along on pure inertia, and were simply slow to catch on to the change in future expectations. Besides, discounting the likelihood that investors may be acting very rationally in response to other factors that also affect their returns is just plain silly.

Either way you slice it, if someone could have predicted this action, they could have profited from it. Not very much, mind you, given the small size of the move and the transaction costs involved. But they could stand to earn a slightly higher return than others with somewhat less risk, if only they could see it coming.

But that's impossible! Which, given our track record with the impossible, is why we couldn't resist....

As for tomorrow, well, there are always other opportunities now, aren't there?