In his 2013 State of the Union address, President Obama had the following to say about the "success" achieved during his tenure in office in reining in the federal government's spending:

Over the last few years, both parties have worked together to reduce the deficit by more than $2.5 trillion – mostly through spending cuts, but also by raising tax rates on the wealthiest 1 percent of Americans. As a result, we are more than halfway towards the goal of $4 trillion in deficit reduction that economists say we need to stabilize our finances.

Update 30 January 2014: It looks like we accidentally left a bit of this post on the editing room floor. Here's the deleted scene!...

Let's flash forward to 2014. Here's what President Obama had to say about that budget deficit reduction achievement in his 2014 State of the Union Address:

Here are the results of your efforts: The lowest unemployment rate in over five years. A rebounding housing market. A manufacturing sector that’s adding jobs for the first time since the 1990s. More oil produced at home than we buy from the rest of the world – the first time that’s happened in nearly twenty years. Our deficits – cut by more than half. And for the first time in over a decade, business leaders around the world have declared that China is no longer the world’s number one place to invest; America is.

We see that reducing the government's budget deficit is something the President associates with good things - but the U.S. government is still running in the red by billions of dollars - all of which are inflating the national debt, which totals over $17 trillion now - larger than the nation's entire annual GDP.

So what's the real impact of that achievement in terms that can be related to typical American households? And how does that compare to other U.S. Presidents in the modern age of chronic federal government budget deficits?

The answer is displayed graphically below for each President beginning with Richard Nixon.... 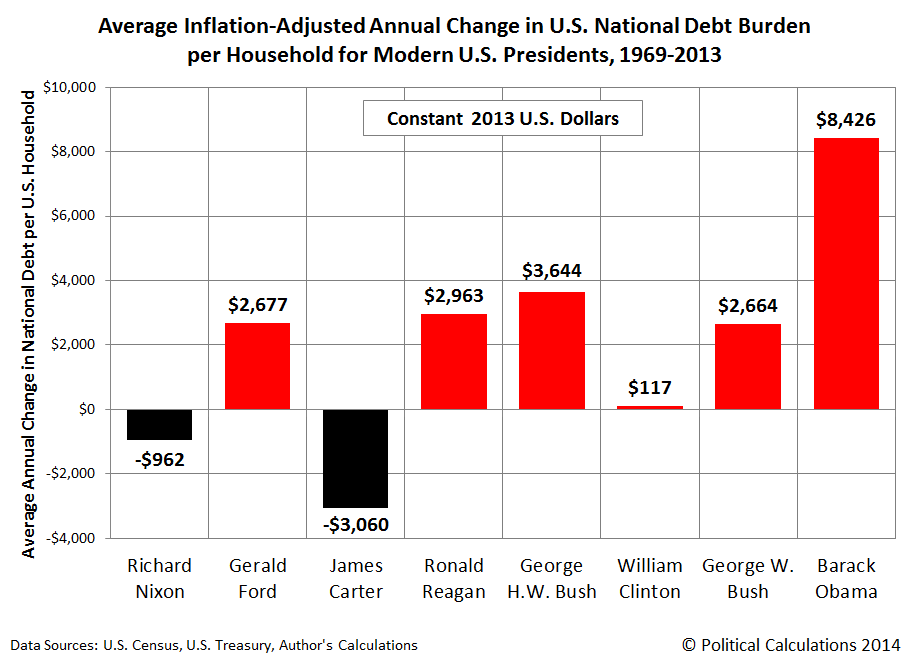 To arrive at these results, we divided the total public debt outstanding for the U.S. federal government by the number of U.S. households counted by the U.S. Census Bureau for each year since 1967, when the U.S. Census Bureau first started tallying this data, and adjusted each of these values to account for the effect of inflation over time, expressing each in terms of constant 2013 U.S. dollars.

We then subtracted the national debt burden per U.S. household of the last year of the preceding U.S. President's term from the equivalent value recorded in their final year in office, dividing that difference by the number of years that each was in office (which is five years and counting for President Obama). The results of all that math work out to be exactly what we've presented in the chart above.

We should note that the value for President Obama incorporates our projection that were 123,700,000 households in the U.S. in 2013 - the U.S. Census Bureau won't report its official tally until September 2013, so until that time, the figure representing President Obama first five years in office really represents a preliminary estimate - one that should be relatively close to what the final figure will work out to be.

The bad news is that there is a clear winner for the President with the worst record on budget deficits, which is perhaps why those economists are saying that we need even more deficit reduction to stabilize our finances. That's the consequence of having spending get out of control.

If only we had effective leadership in Washington D.C.