Political Calculations
Unexpectedly Intriguing!
11 February 2014
Dividends: It Was the Best of Times. It Was...

In January 2014, a new all-time record for the number of publicly-traded U.S. companies that announced increases in their dividends was set. 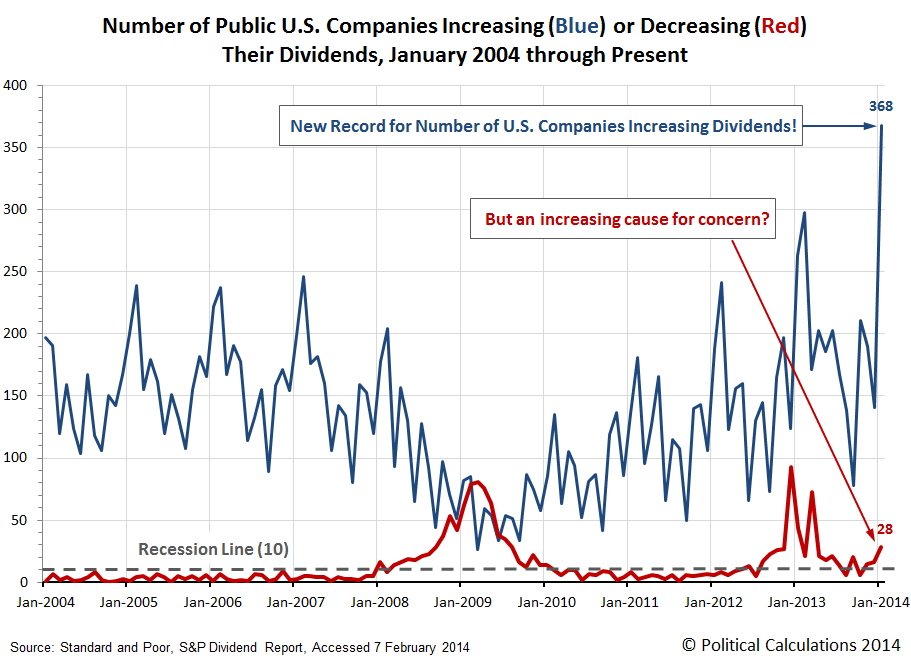 In January 2014, some 2,750 U.S. companies issued some sort of declaration about their dividends. 368 announced they would be increasing their dividends going forward, breaking the previous record of 298 recorded in February 2013 by a margin of 70.

We think that what we're seeing is the tail end of the restructuring of corporate compensation following the 2013 tax hikes. Since January 2013, U.S. companies have been shifting funds away from paying wages and salaries to their owners and managers, who are now drawing a larger share of their compensation in form of dividend payments. These actions are a direct response to the large tax hikes that took effect early in 2013, which work to minimize the negative impact of increased taxes on their personal compensation.

We have a strong suspicion that a lot of the firms taking this action now are the ones where the owners and executives were either not savvy enough to realize how much their personal tax bills would go up in the 2013 tax year, or were, but for one reason or another, couldn't shift more of their compensation from salaries to dividends.

Unlike 2013, there hasn't been a corresponding rally in stock prices for the S&P 500 in 2014. The reason for the absence of a rally is pretty straightforward - the companies that make up the S&P 500 largely acted to restructure their executive compensation during 2013. The companies acting to boost their dividends in January 2014 are largely outside of the S&P 500, which means that they're considerably smaller in size and market capitalization.

The lack of impact on major stock market indices doesn't mean that these companies' dividend policies are insignificant however, since we can get a good indication on the relative health of the U.S. economy by tracking how many act to cut their dividends each month. As we show in the chart above, there is an increased cause for concern, which we'll soon address.