There were no surprises for stock prices last week, as the S&P 500 largely behaved as we expected it would. Unfortunately, because it did, the S&P 500 will open this week in a pretty precarious position. Mind the notes in margin of our first chart, and we'll have a little more commentary on that situation in this week's Analyst Notes: 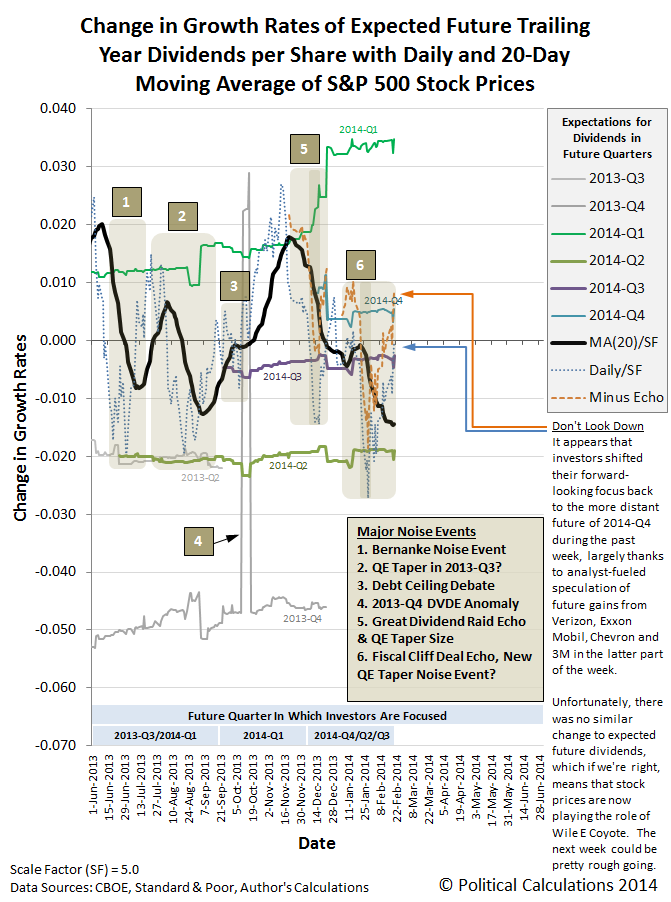 During the past week, investors fully shifted their forward-looking attention from 2013-Q3 to the more distant future quarter of 2014-Q4 in setting today's stock prices, reaching that level on Thursday, 20 February 2014 on positive speculation for Verizon (NYSE: VZ), Exxon Mobil (NYSE: XOM), Chevron (CVX) and 3M (NYSE: MMM). That shift in focus largely accounts for why stock prices were able to basically continue moving sideways during the week, even though each of the alternate futures for dividends turned south after Wednesday, 19 February 2014. 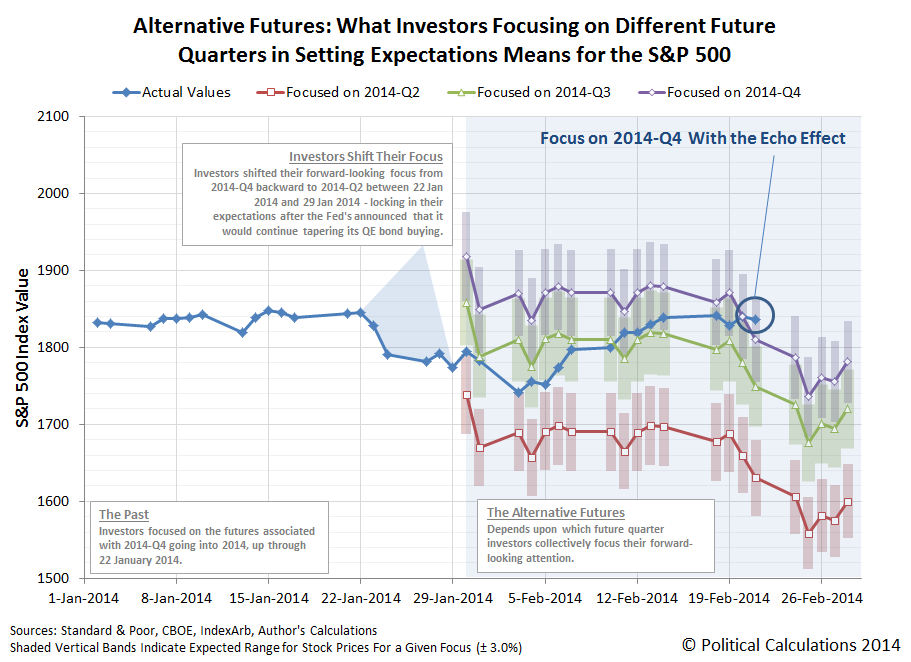 Going back to our first chart, stock prices were able to do that because they were still below the level that investor expectations would set them if investors were tightly focused on the future quarter of 2014-Q4.

But now the situation has changed, because Friday, 21 February 2014 saw stock prices close at a level that's suspended above that level. Not greatly so, as the value is still within the range that we would expect given typical levels of noise in the market, but that position will become increasingly more tenuous as time moves forward, making any continued sideways movement highly unlikely - especially so in the absence of an increased volume of positive noise in the market to offset the fundamental pull of expectations for the future quarters that investors are mostly likely to focus upon at this point in time.

At some point in the very near future, something that very much looks like the rules of gravity in Wile E Coyote's universe may very well come into play, as the rules of deterministic chaos for stock prices with the strange attractor of change in the expected growth rates for dividends per share at specific points of time in the future would have them react:

With the future for 2014-Q1 effectively locked in at this point, the best scenario for investors would be if they sustained their forward-looking focus on the expectations associated with 2014-Q4. Anything that would shift their focus to the less distant future quarters of 2014-Q3, or worse, 2014-Q2, would have a significantly more negative effect upon stock prices.

And now, you cannot say that you were not told! We're definitely looking forward to interesting things happening in the market this week!