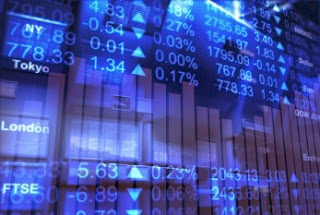 The question is relevant because 2013 was just such a year, and a good question to consider is how much stock prices could have been driven by a reduction in the number of shares issued to the public and their effect upon the standard tools that investors use to assess the performance of a company.

The Harvard Business Review describes how share buybacks can affect the value of a company:

Buybacks affect value in two ways. First, the buyback announcement, its terms, and the way it is implemented all convey signals about the company's prospects and plans, even though few managers publicly acknowledge this. Second, when financed by a debt issue, buybacks can significantly change a company's capital structure, increasing its reliance on debt and decreasing its reliance on equity.

Companies have two main ways of returning cash to shareholders: buybacks and dividends. The latter are pretty straightforward: the company pays a certain amount for each stock held, usually on a quarterly basis.

Under a share buyback, a company purchases a certain number of its own shares. It may do this on the open market or by giving its shareholders the option to tender their stock to the firm, usually at a slight premium to the market price. It then cancels the purchased shares, reducing the total number outstanding and giving each shareholder a larger slice of the company.

Buybacks also increase earnings per share (because total earnings are divided by fewer shares) and tend to increase the value of the remaining shares.

It's that latter effect, multiplied across dozens of large companies, that has the potential to affect large market indices, such as the Dow Jones Industrial average or the S&P 500.

The answer is: it depends upon the index. S&P's Howard Silverblatt recently offered the following comment in S&P's Earnings and Estimates report (Excel Spreadsheet), where we've added the paragraph breaks for the sake of better readability:

Buybacks do not increase S&P 500 Index earnings-per-share (EPS), the Dow is a different story. On an issue level, share count reduction (SCR) increases EPS, therefore reducing the P/E and making stocks appear more 'attractive'. SCR is typically accomplished via buybacks, with the vital statistic being not just how many shares you buy, but how many shares you issue.

Many companies, however, appear to have issued fewer shares, and as a result have reduced their common share count. The result is that on an issue level it is not difficult to find issues with higher EPS growth than net income (USD) growth. A quick search found that over 100 issues in the S&P 500 had EPS growth for 2013, which was at least 15% higher than the aggregate net income. The result for those issues, were higher EPS and a lower P/E.

On an index level, however, the situation is different. The S&P index weighting methodology adjusts for shares, so buybacks are reflected in the calculations. Specifically, the index reweights for major share changes on an event-driven basis, and each quarter, regardless of the change amount, it reweights the entire index membership. The actual index EPS calculation determines the index earnings for each issue in USD, based on the specific issues’ index shares, index float, and EPS. The calculation negates most of the share count change, and reduces the impact on EPS.

The situation, however, is the opposite for the Dow Jones Industrial 30.

The Dow methodology uses per share data items. So if a company reduces its shares, with the impact being a 10% increase in earnings (as an example) with a corresponding 5% increase in net income, the Dow’s EPS will show the increase in EPS. Again, the impact would be mostly negated in the S&P 500. This is not to say that buybacks don’t impact stock performance, and therefore the stock level of the indices (and price is in P/E). It is only to say that the direct impact on the S&P 500 EPS is limited, even as examples on an issue level are becoming easier to find.