This week, we're going to present our charts tracking the behavior of stock prices with respect to their underlying expectations associated with dividends to be paid in future quarters in a different order from what we normally do. Our first chart shows how stock prices changed with respect to the where the expectations for dividends in the next three quarters would set them, depending upon which future quarter investors might be focused upon: 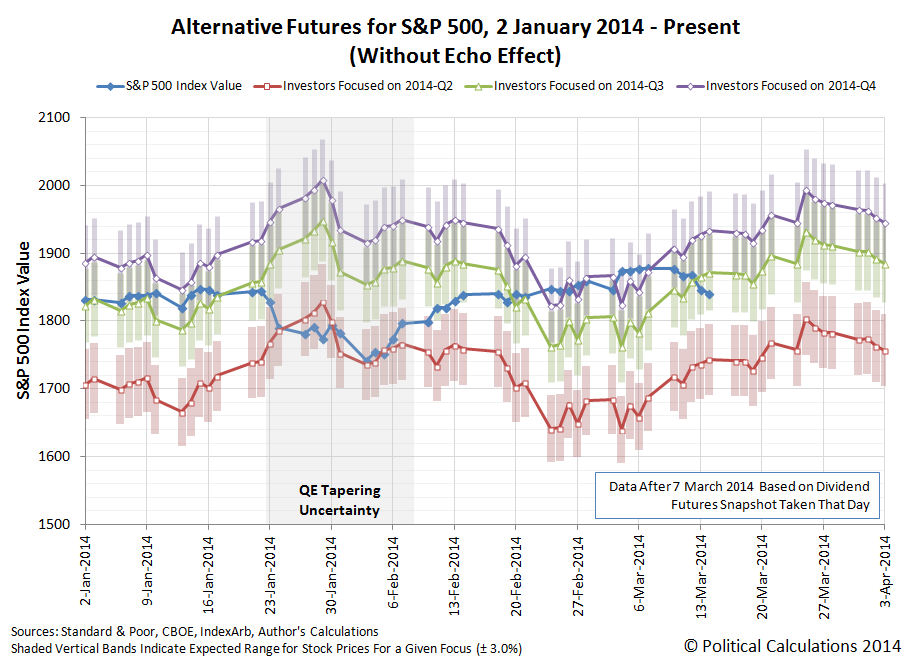 Since last week, and definitively since last Thursday, investors would appear to have shifted their forward-looking focus away from the more distant future quarter of 2014-Q4 to instead focus upon the future quarter of 2014-Q3, as developing uncertainty about the Fed's future actions in the face of unsettling news spurred investors to focus on the nearer term in setting today's stock prices. Our next chart shows what that means for the key measures of the change in growth rates for both stock prices and the dividends expected in each of the future quarters for which we have data: 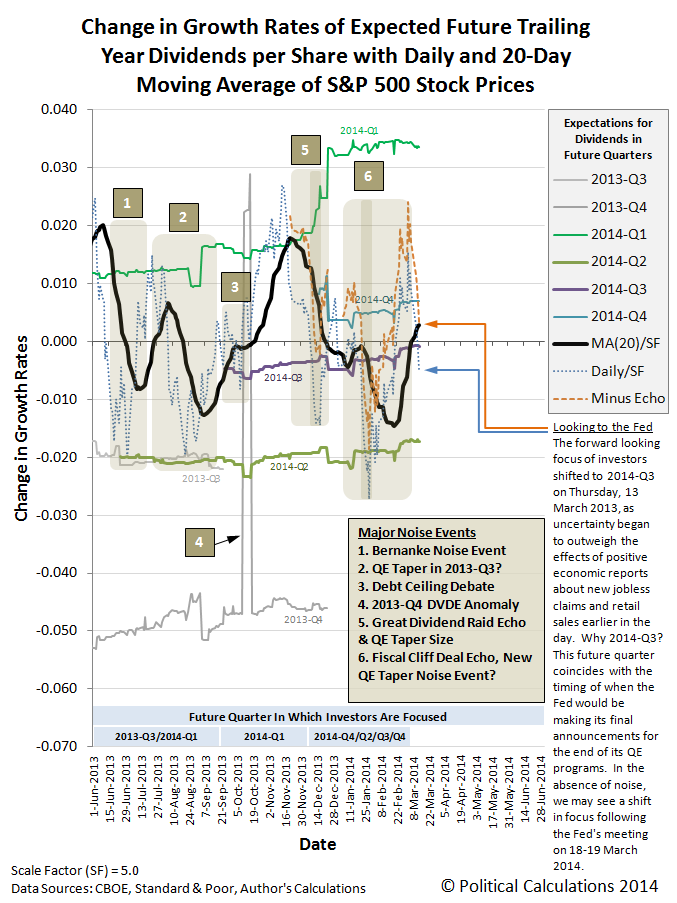 Because it plays such a role in this week's analyst notes, here's the text from the margin of the chart above, which for the record, we wrote last Friday (as we do most weeks!):

The forward looking focus of investors shifted to 2014-Q3 on Thursday, 13 March 2013, as uncertainty began to outweigh the effects of positive economic reports about new jobless claims and retail sales earlier in the day. Why 2014-Q3? This future quarter coincides with the timing of when the Fed would be making its final announcements for the end of its QE programs. In the absence of noise, we may see a shift in focus following the Fed's meeting on 18-19 March 2014.

We have a really surprising example of how the shifting focus on investors drives stock prices, in what is perhaps one of the oddest bits of modern journalism we've ever seen.

By "modern journalism", we mean journalism in the age of Internet-based reporting, where the apparently "same" article is rewritten periodically throughout the course of a day. On 13 March 2014, CBS Marketwatch initially featured an article with the following headline:

Alas, that headline wouldn't hold for long on that Thursday, as the S&P 500 began to fall steadily throughout the day after having gapped upward from the previous day's close to open. 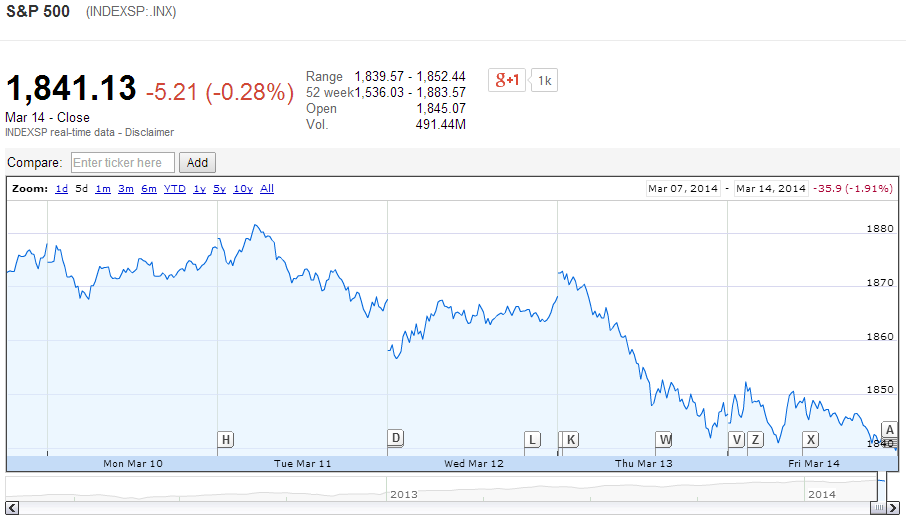 By midday, the original text of the article had changed to include the following description of what was really driving stock prices downward that day:

But investors turned all their attention to the Fed policy-setting meeting next week while keeping a weary eye on Crimea’s vote this weekend to decide whether to stay with Ukraine or join Russia. The FOMC policy setting meeting is scheduled for March 18-19 and Fed Chairwoman Janet Yellen will give her first press conference in her new role.

Let's give credit where it's due - that's pretty good financial reporting. It's fully consistent with what we observe with how stock prices behaved that day, as they dropped to a level fully that corresponds to a forward-looking focus on the future as measured by the dividend futures of 2014-Q3. That is the quarter in which the Fed will make its final determinations for how it will complete its exit from its QE programs, which is why investors concerned about how the Fed's actions might affect their investments would choose to focus upon that specific point of time in the future.

After the trading day was over however, the text of the online article morphed once again, with the final version posted at 5:09 PM EST now reading as follows:

In the absence of major economic news, investors will focus on the Fed’s policy-setting meeting, scheduled for March 18-19, at which the central bank is expected to keep up the pace of monetary stimulus reduction.

That's something that we could just as easily have written based solely upon our observations of how stock prices behaved that day! The only thing the team of CBS Marketwatch journalists missed is the connection between the day's stock prices and the role of the dividend futures for 2014-Q3 in setting them, which simply isn't something of which they are even aware.

But what makes this surprising example so odd is the permanent URL for the online article, which makes us smile every time we read it, considering that the day, according to stock price futures before the market even opened, was originally going to be very different:

Much like earnings, stock price futures have very little influence over how stock prices actually behave!