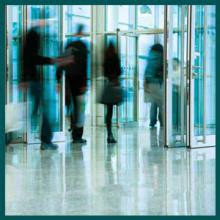 What is the natural rate of unemployment in the U.S. going into 2014? And how much slack is there in the U.S. job market?

We have the tool to answer those questions, and we now also have the finalized data for the number of employed and unemployed Americans as well as the job turnover rates for which Americans were being hired into new jobs or separated from their old ones through the end of 2013.

Those values for December 2013 have been entered in the tool below - the only thing separating you from the answers is your clicking of the "Calculate" button!

With less than a half-percentage point difference between these values, these figures suggest that there is some, but not much, slack in the U.S. job market. Comparing these figures to our results from a year ago, we see that the amount of slack has slightly narrowed.

We do not however see any indication of overheating in the job market, which would be the case if the actual unemployment rate were above the natural rate, suggesting that the overall trajectory of jobs will continue to follow a trend of slow improvement.

Want to Run the Latest Numbers for Yourself?

You can get the most recently reported data through the links below - take care though to avoid mixing and matching the data for different months!