We learned something really surprising about the wind energy industry from President Obama's FY2015 budget proposal. He doesn't believe that the industry will ever be capable of economically sustaining itself.

Here's how we know. Tucked away within the proposal, President Obama is proposing making the wind energy production tax credit permanent.

Mr. Obama’s budget would permanently extend the production tax credit for wind electricity, which expired last year after Congress failed to pass a bill renewing it. Over the next 10 years, the tax credit would cost $19.2 billion, according to the budget plan.

Senate Finance Chairman Ron Wyden (D., Ore.) has indicated he wants to pass a bill extending this tax credit and other temporary ones. But it’s unclear whether he has enough support to pass it in the full Senate, and the House seems even less likely to support such a proposal. 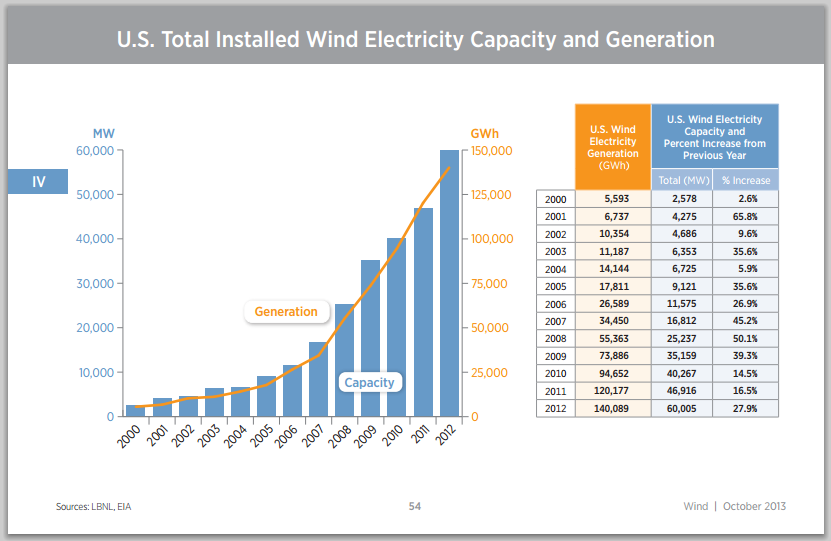 So with that kind of "success", why does the wind energy industry need a permanent tax credit? After all, the purpose of the tax credit was to greatly accelerate the growth of the nation's installed capacity for wind energy - not to permanently sustain it.

That's why the U.S. Congress is willing to do away with the wind energy industry's tax credit:

This sweetheart deal looks to be on its way out, in part because it succeeded in what it set out to do. Over the past five years, wind has accounted for 36 percent of all new electricity generation installed in the U.S., second only to new natural gas installations. Wind now supplies more than 4 percent of the country’s electricity. At about 60,000 megawatts, there’s enough wind energy capacity to power 15.2 million U.S. homes, a more than twentyfold increase since 2000. It’s still tiny compared to fossil fuel: Combined, coal and natural gas supply roughly two-thirds of U.S. electricity. But wind produces about six times more electricity than solar. That’s led Congress to take steps to do away with tax incentives first established in 1992 to help the fledgling industry take root. In December lawmakers allowed the credit to expire.

The problem though is that for all its apparent success, wind energy is far from being as reliable as the fans of renewable energy would make it seem:

In Texas, the wind tends to blow the hardest in the middle of the night. That’s also when most people are asleep and electricity prices drop, which would be a big problem for the companies that own the state’s 7,690 wind turbines if not for a 20-year-old federal subsidy that effectively pays them a flat rate for making clean energy no matter what time it is. Wind farms, whether privately owned or part of a public utility, receive a $23 tax credit for every megawatt-hour of electricity they generate. (A megawatt-hour is enough juice to power about 1,000 homes for one hour.) This credit, which was worth about $2 billion for all U.S. wind projects in 2013, has helped lower the price of electricity in parts of the country where wind power is prevalent, since wind producers can charge less and still turn a profit. In Texas, the biggest wind-producing state in the U.S., wind farms have occasionally sold electricity for less than zero—that is, they’ve paid to provide power to the grid to undercut the state’s nuclear or coal energy providers.

To find out how reliable wind energy is for utility consumers, we've taken the NREL's data and calculated the average production for the nation's installed wind capacity, which we've presented in the table below:

For our calculation of Average Wind Energy Produced, we divided the total electricity generated by wind by 8,760, which is the number of hours in a year. The result gives us a good indication of how much of the claimed "Installed Capacity" for wind energy was actually realized, for which we've also calculated the percentage. 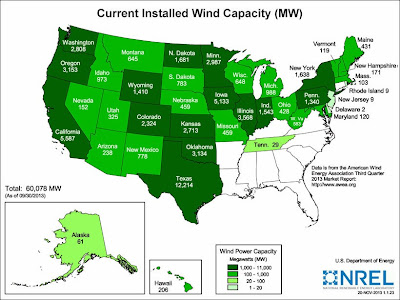 That math assumes that the wind power generating equipment that has been installed would be running 24 hours a day, which is far from the case, as the strength of the wind varies throughout the course of a day, and also for more mundane reasons, such as the need to perform periodic maintenance, during which the wind turbines are shut down from operating. As such, it does not give an indication of the efficiency at which electricity is generated while the wind turbines are running.

What it does do however is give us a good sense of how reliable wind energy is in generating electricity for utility consumers. From 2000 through 2012, what we find is that wind energy delivered anywhere from 18% to 29% of its installed capacity, demonstrating a considerable degree of unreliability for utility consumers compared to other methods of generating power. Going by the wind energy industry's own claims, instead of powering the equivalent of 15 million American homes, it's actually only powering enough power for somewhere between 2.7 and 4.35 million 8.7 and 14 million of them.

Update 16 March 2014: Michael Goggin of the AWEA trade organization caught an error in our math for the calculation of the equivalent amount of power that would be consumed by a "typical" U.S. household. For the 18-29% range indicated above, we should have found that the amount of power generated through wind energy would be equivalent to that consumed by anywhere from 8.7 to 14 million U.S. homes.

He also indicates that the wind industry installs the bulk of its new capacity near the end of each year, which means our percentage estimates are somewhat understated. Matching the energy actually produced in a given year with the installed capacity reported in the previous year increases the actual realized capacity factor to be between 25% and 38%, which would coincide with an amount of power generated to the equivalent of between 12.1 and 18.4 million U.S. homes, or rather, 15 million homes, give or take 3 million (about 20%).

Unfortunately, the 13 percentage point spread for the 25-38% range that comes from matching a year's actual electricity production with the installed capacity reported in the previous year indicates that wind power is somewhat more variable and less predictable than our original calculation found.

Related corrections are presented in boldface font throughout the remainder of the post.

Put another way, for utility consumers, wind energy is only capable of delivering somewhere between one-fifth to less than one-third of its promise can fall up to 20% short of its promise in a given year. And even then, it doesn't deliver what it produces when it's really needed.

That's why the wind energy industry badly needs its production tax credit to be made permanent:

That the green energy lobby is now working to make the wind energy tax credit a permanent burden upon U.S. taxpayers, even as the industry supporters claim the industry's "success", really means that the entire industry's business model is fatally flawed. In calling to make the tax credit permanent at their behest, President Obama is really communicating on their behalf that the wind energy industry will never be able to sustain itself without it.

A smart investor would recognize these things and cut their losses so they could move on to greener opportunities. Allowing the wind energy industry's tax credit to permanently expire rather than be made a permanent burden for American taxpayers would make that possible.

Alas, President Obama is not a smart investor. Especially where green energy is involved.