Once upon a time, the Internet was a really cool place to search out and learn useful information about the real world. Keep that in mind as David Tufte reveals a shocking discovery of what's lurking just a few pages of search results away from you are right now....

You've probably heard about the mass kidnapping in Nigeria? (If not, Islamist terrorists raided a girls school, kidnapped a few hundred teenagers, and are threatening to sell them for … you know …).

This week there’s news that the Islamists may be hiding out in the Sambisa Forest.

This forest is a topic that is basically … not on Google. (I know, you thought everything was on the google these days). The linked article above is one of the few items with any content.

After some sleuthing I was able to find, what I think is this forest, on Google Maps. I circled it in red. The dark green with a little blue above it is what is left of Lake Chad — the big lake you always see on maps in the middle of the Sahara. 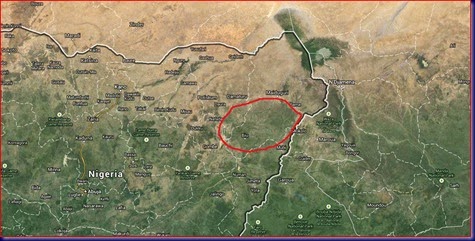 So I went to Google and found … pretty much nothing about crustaceans in the Sambisa Forest. After a few minutes I concluded that English was not the primary language of the person who wrote the article. This makes me think that maybe they meant arthropod (millipedes) rather than crustaceans (crabs).

What does all this have to do with Kim Kardashian, the center of all media? It's that if you enter "sambisa forest crustacean" into Google, you get only 5 pages as the default response. Most of them are uninformative, but when you get to the 4th page, you find a link to this:

Kim Kardashian Shows Off Her Big b*tt in Sexy…

Hits like this start increasing. So Google has very little on the Sambisa Forest, but eventually you get to photos of Kim Kardashian's butt because she happened to go to an LA restaurant called Crustacean.

As best as we can tell, the Internet has degenerated into a massive electronic wasteland that is increasingly being overrun by cats. And Kardashians. And countless other empty distractions with precious little room to communicate useful information about real life unfolding in the real world in real time.