Political Calculations
Unexpectedly Intriguing!
16 July 2014
The Two Californias: One for Adults, One for Teens

There are two Californias. There is one where adults (Age 20 and over) are gaining jobs at a rate that's slightly faster than was the case in the years before the December 2007-June 2009 recession in the U.S. 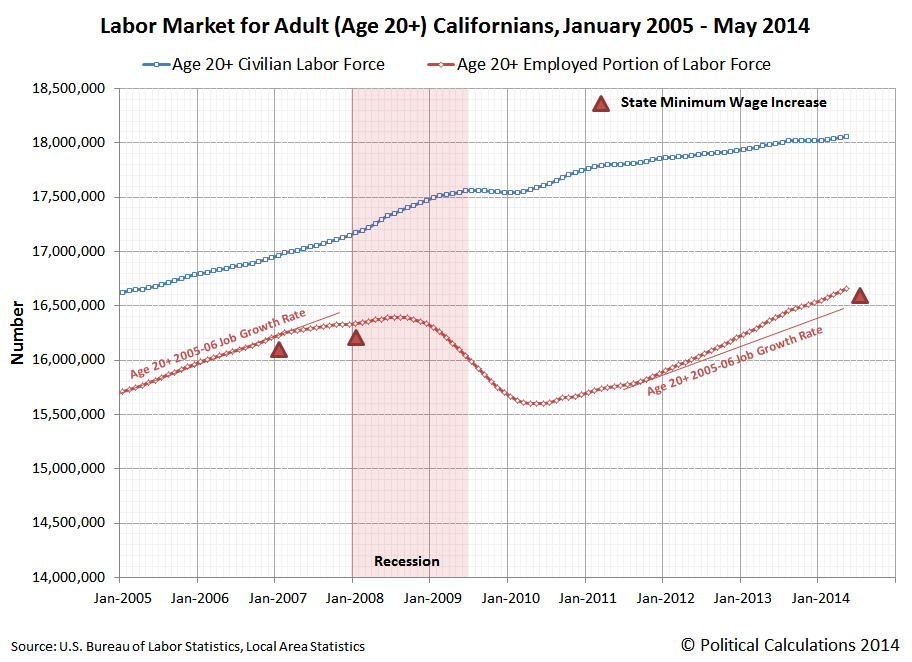 And there is the one where teens (Age 16 to 19) are falling further and further behind in the job market. 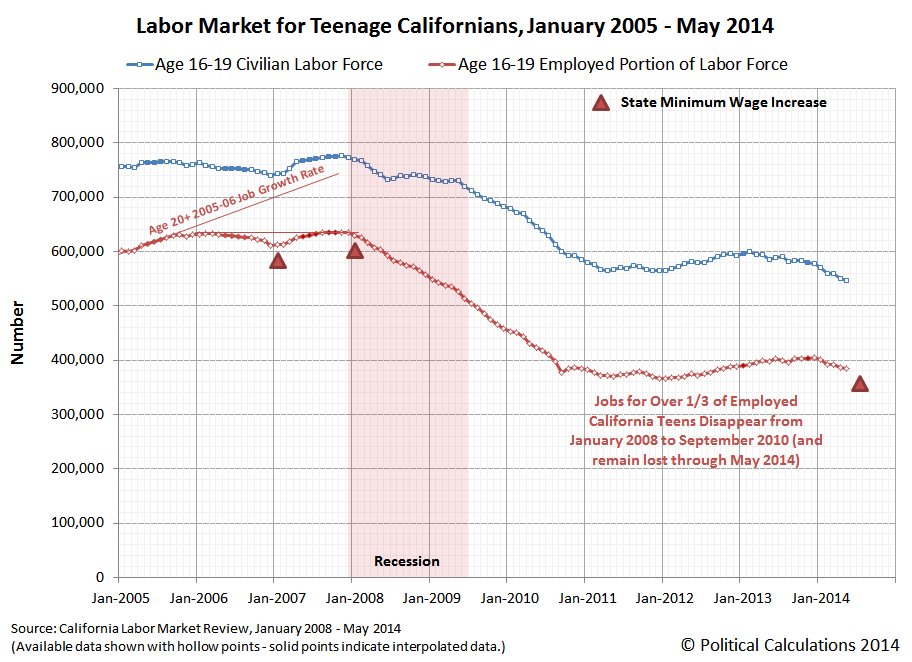 The data in both charts is the trailing twelve month average for non-seasonally adjusted data. Taking the trailing year average of this data allows us to account for the effect of seasonality in the data.

California increased its minimum wage from $6.75 per hour to $7.50 per hour on 1 January 2007. The effect upon teens in the labor market was minimal since California's economy was still growing, which allowed employers to somewhat offset the 11% increase at the time. That said, instead of keeping pace with the job market for adults, we see that the employment situation for California's teens basically flatlined during 2007. We also see that the number of employed teens began falling in the months prior to the minimum wage increase, as employers anticipated the hike.

California increased its minimum wage from $7.50 per hour on 1 January 2008. Once again, the job market for adults was little affected, with the number of employed Age 20+ Californians growing through July 2008 before finally being negatively impacted by economic contraction and its associated deflationary pressures.

By contrast, the employment situation for Californians teens began deteriorating rapidly after the higher minimum wage was imposed, with the rate of decline in the number of employed teens in the state not decelerating until September 2010 - one year and three months after the recession in the U.S. ended, before beginning to decline at a much slower pace.

Meanwhile, adult Californians saw their job market turn around months earlier, growing at a pace similar to that from before the recession through July 2011, then at a faster pace afterward.

The job market for teens in California didn't bottom out until January 2012, then began recovering at a much slower pace than that for adults. That slow rate of improvement lasted through December 2013. Since January 2014, the trailing twelve month average for the number of employed teens in California has been falling in the months in advance of the state's next minimum wage hike from $8.00 per hour to $9.00 per hour on 1 July 2014.

Americans between the ages of 16 and 19, by the way, make up approximately 25% of all individuals who earn the minimum wage in the United States.