Political Calculations
Unexpectedly Intriguing!
25 August 2014
Tracking Along with the S&P 500

We're trying something new with how we present our forecast alternative trajectories and the actual trajectory of the S&P 500, in that we've trimmed out the seemingly irrelevant alternative futures for 2014-Q3 and 2015-Q1 and overlaid our rebaselined trajectory for 2015-Q2 (which compensates for "echoes" in the historic data we use for our projections): 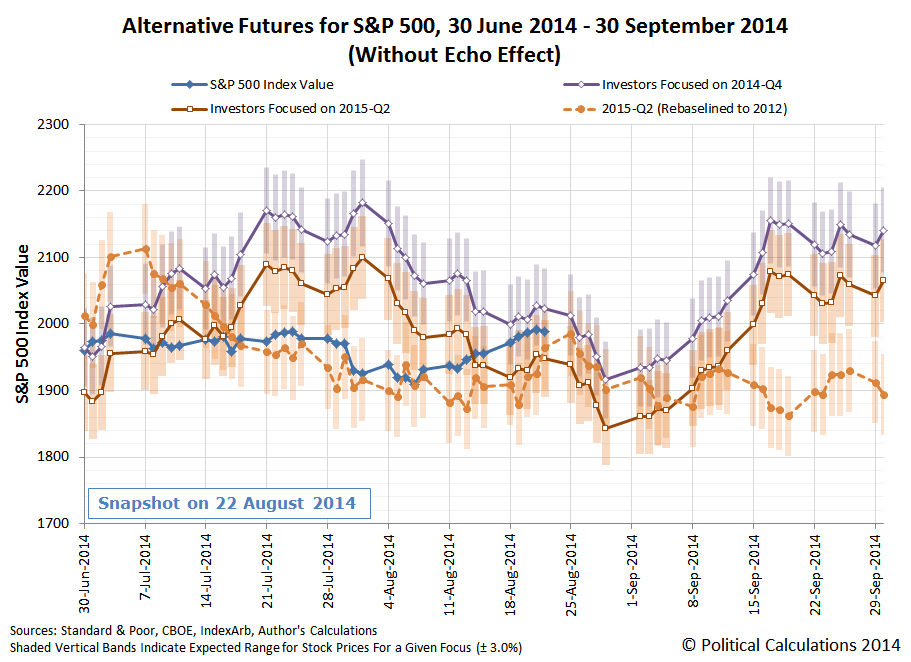 Overall, what we observe for the actual trajectory of stock prices (solid blue line) over the past week is consistent with investors continuing to primarily focus on 2015-Q2 in setting today's stock prices, as that trajectory falls within the expected range for both our standard model (solid orange line) and our rebaselined model (dashed orange line).

But it would also appear that stock prices are running to the hot side of things with respect to these expected trajectories. What we think is going on is that the positive earnings and economic data released during the past week, such as that for Home Depot (NYSE: HD) and for the housing market, has shifted the attention of some investors toward 2014-Q4 (solid purple line), boosting stock prices above the level that would be fully consistent with a very strong focus on 2015-Q2 in setting stock prices.

But not enough to fully jump trajectories from 2015-Q2 to 2014-Q4. Instead, the dominant factor in setting investor expectations today continues to be the timing of when the Federal Reserve will most likely begin hiking short term interest rates, with the second quarter of 2015 still marking the period of time when investors predominantly believe the Fed will act.

Even though the Fed is apparently having a "real debate" over whether to begin hiking interest rates in the first quarter of 2015.

For now, we'll just note that if investors collectively come to believe that interest rate hikes were to be hiked in 2015-Q1, such a change in expectations would coincide with a rather substantial correction in stock prices, as the currently seemingly irrelevant trajectory for 2015-Q1 would suddenly become highly relevant....