Since the S&P 500 is behaving so predictably, and because we just visited the topic on Thursday, 16 October 2014, we thought we'd take this opportunity to revisit how the stock prices of the S&P 500 behaved in the third quarter of 2014.

Our first animated chart shows how stock prices behaved with respect to our standard baseline model, in which we incorporate the historic stock prices of one year earlier as the base reference points from which we project stock prices in the near term future:

Since we knew coming into the quarter that our standard baseline model's projections would be skewed off as a result of what we call the echo effect, where the echoes of past noise events show up in our current day projections, we developed our rebaselined model, in which we exchanged the historic stock price data of a year ago for the historic stock data of two years ago - a period of time that was relatively free of the kind of noise events that can throw off our projections of future stock prices.

That simple change produced very good results, as demonstrated in the animated chart of our rebaselined model for the third quarter of 2014:

All in all, if you knew how far forward investors were looking in setting today's stock prices, and also when they were shifting their attention from one point of time in the future to another, 2014-Q3 was a pretty predictable quarter.

Speaking of which, let's look under the hood at the fundamental driver of stock prices: the changes in the rates of growth of dividends expected at discrete points of time in the upcoming future: 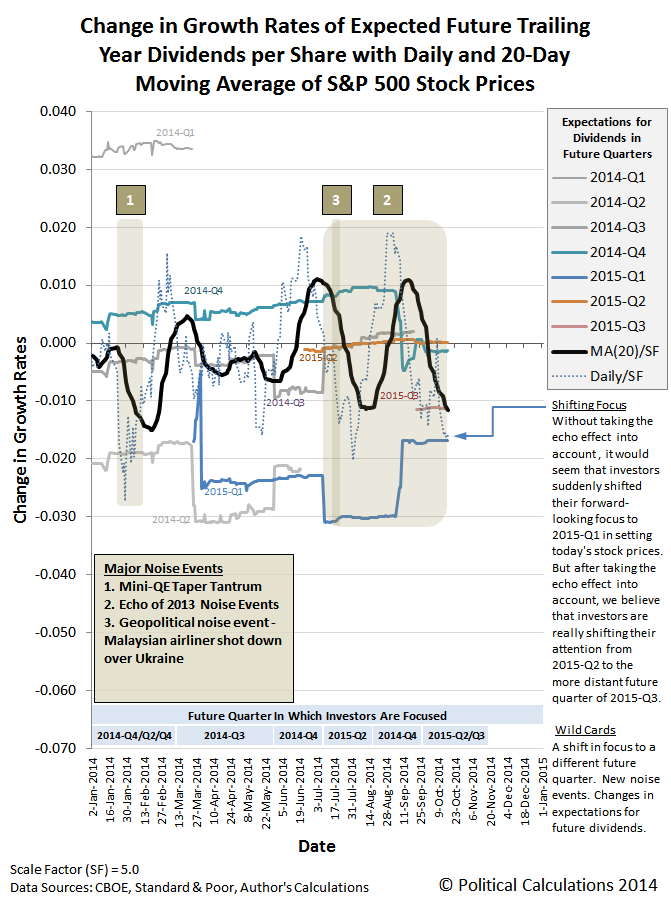 Mind the notes in the margin of our expectations chart.

On a final note, we'll observe that the projections of our rebaselined model will begin to skew off from the actual trajectory of stock prices as it will be affected by the echo effect beginning in November, thanks to the two year anniversary of the noise events that resulted from the outcome of the 2012 U.S. election. The cool thing is that we now have the ability to effectively work around that kind of challenge in using our analytical methods, which is really what we demonstrated during the third quarter of 2014.