Usually, around Halloween, we share the scariest concepts in furnishings that we find during the course of the year. This year though, we couldn't pass on the video of a flying Grim Reaper terrorizing public parks, so we put off the terror that might be found waiting for you as you try to get comfortable at the end of a long day. Won't you take a seat?

Our first entry looks normal, if a little too well ventilated, until a light shines on it from the right direction, when its true evil is revealed: 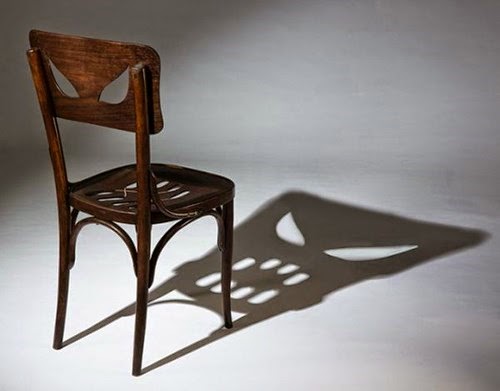 Our second example of a chair that inspires terror in all those who sit upon it was designed to do just that ninety years ago by a typically twisted psychologist. Really - we're not making this up! 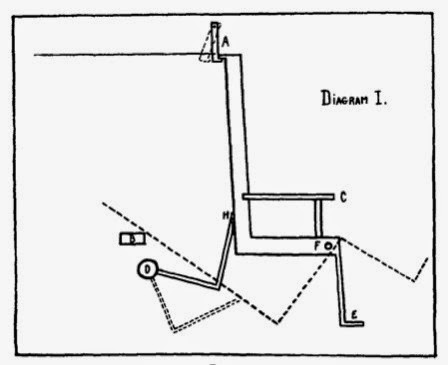 Real Clear Science describes the origins of the Blatz Chair of Terror:

One day in 1924, University of Chicago psychologist William Blatz had his chair collapse under him. The experience was startling to say the least, but also inspiring. A similar experience would surely provide a controlled setting to study the fear response in the wake of a startling event. He quickly devised his own trick chair that would topple back at the click of a button.

Next, he needed a few unsuspecting subjects to sit in it. Eighteen participated. Blatz told them the study would be very relaxing. All they needed to do was sit in a padded chair for fifteen minutes a couple times over the span of a few days whilst having their respiration and heart rate monitored. Blatz was as good as his word for the initial trials. But that all changed on the final day. Lulled into a false sense of security, none of the participants expected what was about to happen.

Perhaps with a cheeky grin on his face, Blatz clicked the button to make the chair topple backwards on every singly one of his subjects. Since they were safely strapped in, no physical harm was done. However, the sudden drop startled the heck out of all of them. Many even tried to escape.

But the best part is that the results of the "experiment" were written up in the Journal of Experimental Psychology. Here's William Blatz' abstract (we've added paragraph breaks for readability):

For the purpose of the present study fear was aroused in the subject by suddenly tilting him backwards in a specially constructed chair. The subject was connected with an electrocardiograph, an electrical pneumograph and a galvanometer. The records were made upon a moving film.

The records showed that upon the arousal of fear the heart beat increased suddenly in speed and in force and became markedly irregular, the duration of these effects varying with different subjects; that in most cases the rate of respiration decreased and the value of the respiratory index above unity increased; and that the electromotive force of the body increased in every case.

The subjects all made an attempt to escape during their first experience with the tilting chair. The second experience, however, failed to call forth this escaping response; but the organic changes measured were exactly the same as at first except for diminished intensity. The subjects all insisted that only the first experience could properly be called one of fear, which leads the writer to conclude that of the "... two components necessary for the experience of a genuine emotion of fear, (i) an organic response of great complexity, and (ii) a gross skeletal response of an adaptive nature... the second appears to be the more important."

Dr. Blatz went on to specialize in child psychology.