For many Americans, part of what makes the Thanksgiving holidays such an ordeal from year to year is simply finding something new and interesting to talk about with family members around the dining table.

We've decided to make that a lot easier to do this year, because we've uncovered a pretty uncanny, yet spurious correlation between the average live weight of farm-raised turkeys in the United States and the value of the MSCI World Stock Market Index since 1970! 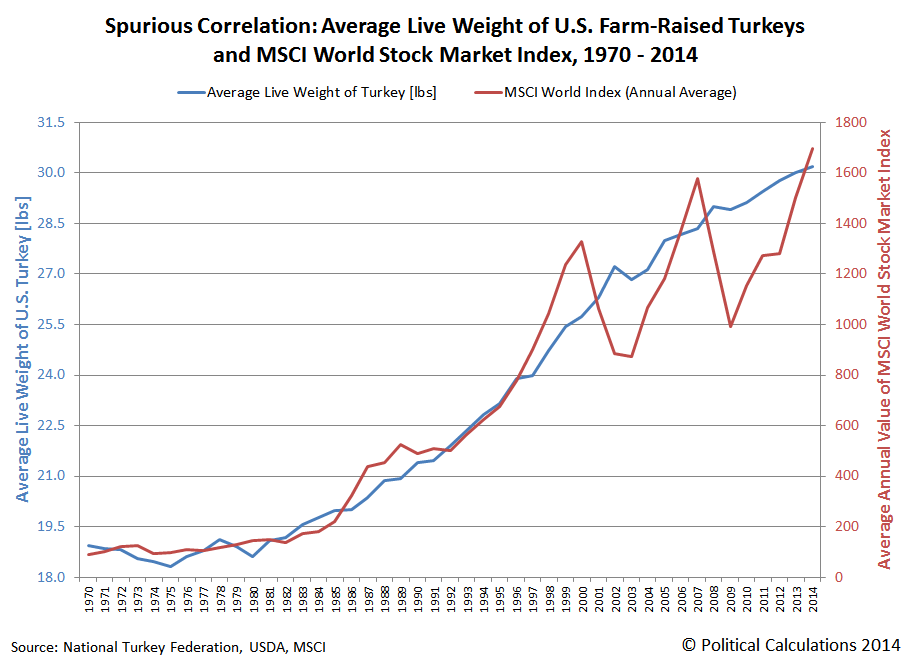 As you can see in our carefully calibrated chart above, whenever the value of the MSCI World index has exceeded the equivalent live weight of an average farm-raised turkey in the U.S., the index went on to either stagnate or crash. And in 2014, the value of the the MSCI World Stock Market Index has once again exceeded that key threshold, which can only mean one thing.... The climate for investors has changed, and it's time to sell!

And if they try to tell you that doesn't make any real sense, you should hold firm and tell them that the correlation is really strong (the R² is 0.9616), which means that the science is settled and that they really shouldn't want to be some kind of climate change science denier.

Speaking of which, the rising live weight of U.S. farm-raised turkeys also is strongly correlated with global warming. Believe it or not, the correlation between atmospheric carbon dioxide and global temperatures is not very strong at all (other factors do a much more coherent job in explaining actual temperature observations).

Say what you will about the science, but you cannot deny that by using tips like this, you can make the conversation around your Thanksgiving dinner table a lot more lively this year!