Political Calculations
Unexpectedly Intriguing!
November 10, 2014
When Will Investors Shift Their Forward Looking Focus for the S&P 500?

After ending the previous week with their forward-looking focus essentially split 50/50 between the current quarter of 2014-Q4 and the more distant future quarter of 2015-Q3, investors fully shifted their attention to 2014-Q4 thanks to a spate of economic news related to the current quarter events, including the 2014 midterm elections, improving new jobless claims and the best employment situation report of the past six years. How long that focus will remain on 2014-Q4 is now up in the air, with the main question now being to which future quarter will investors turn their attention next. 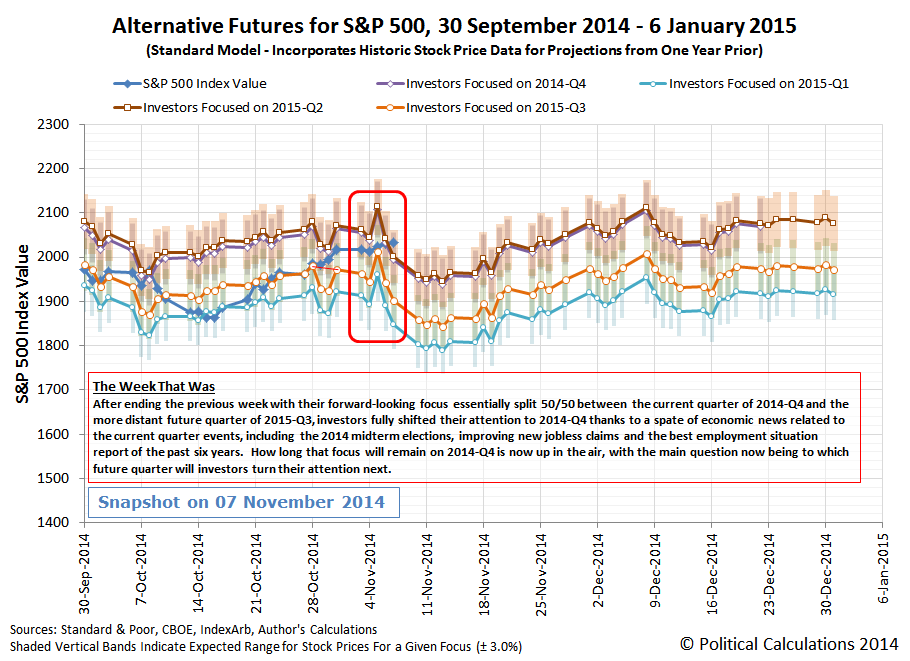 There's also the lesser question of when that shift in focus will occur. With just one week to go, earnings season for 2014-Q4 is nearly over, and with it, the opportunity for companies to alter the fundamental basis for the future expectations of investors: how much of their earnings and cash flow that they will commit to pay out as cash dividends to investors in upcoming future quarters. That puts the beginning of the likely window of time in which investors will have to focus upon a more distant future quarter at 17 November 2014, although there's nothing that really requires them to wait that long as there are no major economic reports coming out in the next week that might sustain their focus on 2014-Q4.

As far as fundamentally-driven changes in future expectations go, the window for those kinds of factors to affect the outlook for investors will then be closed until the next earnings season opens in 2015-Q1.

And then there's the potential influence of the timing of the Fed's announcement on 29 October 2014, when it confirmed that it would indeed terminate its QE 3.0 and QE 4.0 bond-buying programs. Here, when the Fed terminated its previous rounds of Quantitative Easing (QE 1.0 and QE 2.0), there was often a one-month lag between the announcement and a sudden change in the level of stock prices.

Those delays were largely tied to the maturation of short-term Treasuries and expiration of short-term stock option contracts purchased in the days before the Fed's announcements, where the money invested in them was locked up until their maturation and expiration dates were reached. As that money was freed up, investors made new investment decisions based upon their updated future expectations, which would account for the sudden shifts that occurred for stock prices at the one-month anniversary of those previous QE termination announcements.

Since the Fed opted to steadily taper off its asset purchases in its recently concluded round of quantitative easing, we would not expect such dramatic shifts to occur because the amount of its own asset purchases is much lower. The date however would remain important as it would define the likely end of the window in which we would anticipate that investors will shift their focus.

Yet unknown, the wild card in future expectations is 2015-Q4, where we won't get a good read upon until late December 2014.