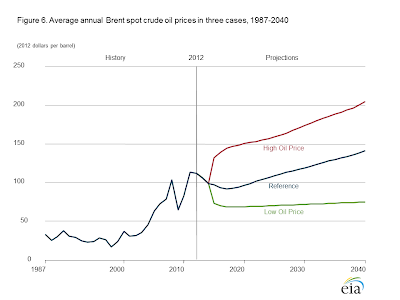 Those are questions that we've asked and answered before, but now, for the first time, we can finally quantify the extent to which either of these economic factors may be driving the price!

We can do that math now thanks to the work of James Hamilton, who built a model of how much world oil prices change in response to changes in the prices of other commodities - ones that are particularly sensitive to changes in the demand for them: copper, U.S. dollars, and 10-Year Constant Maturity U.S. Treasuries.

Our tool below is built to do that math, with the default values being the values recorded for the week of 4 July 2014 (for the "Previous Values" and for the week of 12 December 2014 (for the "Current Values"), which Hamilton recommends because they smooth out some of the big swings in values that are recorded in the day-to-day data. If you want to do the math for the current day, here is where you can obtain the data for the "Current Values" to replace the default values we've entered in the tool below:

Using the default data, which applied for the week of 12 December 2014, we find that 42.8%, or $20.29 of the $47.45 per barrel change in Brent crude oil prices following the week of 4 July 2014 can be attributed to a negative change in global demand (from slowing national economies, particularly in Europe and Asia), while 57.2% might be attributed to the relative changes in the supply of crude oil (thanks largely to increases in U.S. oil production.)

And so, just like the recent discovery involving the causality associated with the chicken and egg dilemma, we now know not only whether its changes in demand or supply factors that are mostly driving changes in the price of oil in the world, but can now also determine tow what extent each factor is responsible!