Political Calculations
Unexpectedly Intriguing!
January 27, 2015
The Immediate Impact of the ECB's QE on the US

From our perspective, the most important and useful part of the Efficient Markets Hypothesis (EMH) is its assumption that asset prices change quickly to reflect the impact of new information upon the future expectations of investors.

So what does the ability of investors to collectively and efficiently absorb and assess new information and to communicate the changes in their outlook through asset prices tell us about what the U.S. Federal Reserve is likely to do with respect to its plans to hike short term interest rates?

Well, if we go by how U.S. stock prices responded after the European Central Bank (ECB) announced its Quantitative Easing (QE) program on 22 January 2015, the immediate assessment of U.S. investors was that the Fed will most likely implement its rate hike plans sooner rather than later. We can see that shift in the sudden change in the trajectory of the S&P 500, where it has gone from following the trajectory associated with an investor focus on 2015-Q4, which is consistent with what had been the growing consensus that the Fed would delay its rate hikes until then, to the nearer-term future associated with a forward-looking focus on 2015-Q2, which investors would now appear to consider to be more likely. 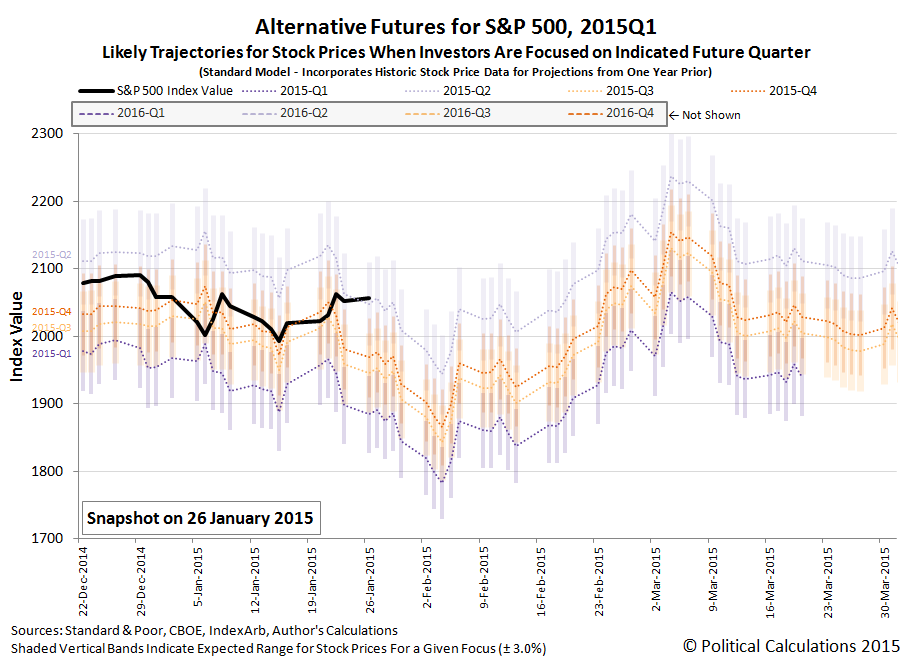 That assessment will most likely be confirmed after the Federal Reserve's Open Market Committee concludes a two-day meeting on Wednesday, 28 January 2015 and issues a new policy statement. The Wall Street Journal explains why investor expectations would change in response to the ECB's decision in its schedule of economic news events for the week.

After the ECB’s bombshell news of last week, all eyes now turn to the Fed. If it signals its continued intent to raise rates in the months ahead, this will likely drive even more fund flows into the dollar. How the Fed views that ECB move will be key. If it interprets it as an effective move to restore growth in the eurozone, it will see it as constructive to U.S. growth and likely want to stay the course and move toward higher rates sometime in the last spring or summer. If it instead focuses on the surge in the dollar that has come from the ECB move, it could be inclined toward holding back because of the disinflationary effect of that.

We already know that the Fed pays very close attention to the stock market in weighing their future actions, which we observed previously during their own QE programs. The reaction of the U.S. stock market to the ECB's action to initiate a QE program for the EU is such that the Fed is likely to hike short term interest rates in the US above their current 0-0.25% range by the end of 2015-Q2.

And that will hold until newer information might force the Fed to adapt its plans.