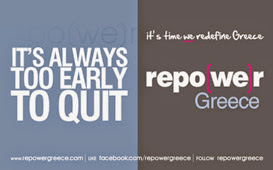 Greece has many problems, but perhaps the biggest problem that nation has had to cope with is the extremely poor leadership it has had since 2007.

Having just elected new leadership, we were encouraged to find that the new Prime Minister, Alexis Tsipras, has a good understanding of the great pain that Greece's previous leadership had imposed upon the Greek people, but were disappointed to see that understanding doesn't extend into the actions of the government that actually caused that pain.

We're basing that assessment on an open letter that Tsipras address to the German people (HT: Mish). While almost everything in the Tsipras' open letter rings true, particularly his description of the deliberate harm that came from the harsh austerity measures the country's leaders were compelled to adopt in 2010 by the troika of the International Monetary Fund (IMF), European Central Bank (ECB) and European Commission (EC), there is something to find fault with in it - specifically the following passage:

The combination of gigantic new loans and stringent government spending cuts that depressed incomes not only failed to rein the debt in but, also, punished the weakest of citizens turning people who had hitherto been living a measured, modest life into paupers and beggars, denying them above all else their dignity.

The problem here is that Tsipras identifies "stringent government spending cuts" as the component of austerity that harmed the Greek economy - while that contributed a small part to the decline of Greece's economy, the thing that really killed it was the large tax hikes imposed by then Prime Minister George Papandreou's government (and particularly the hiking of Greece's Value Added Tax), which was by far the most harmful component of austerity.

As it happens, we can back that assertion up with mathematical precision, demonstrating how it explains how Greece's nominal GDP level changed in response to both government spending cuts and its tax rate hikes. [Speaking of which, almost identical math applied for Spain in 2012 and the U.S. economy in 2013, although here, Quantitative Easing (QE) was specifically used to offset the negative impact.]


Let's show how the disproportionately negative impact of Greece's multiple tax hikes in 2010 spurred Greece into ruins. The following chart shows how the Greek government's spending per capita and revenues per capita evolved with respect to the nation's GDP per capita from 2000 through 2013 (the most recent year for which we have full data): 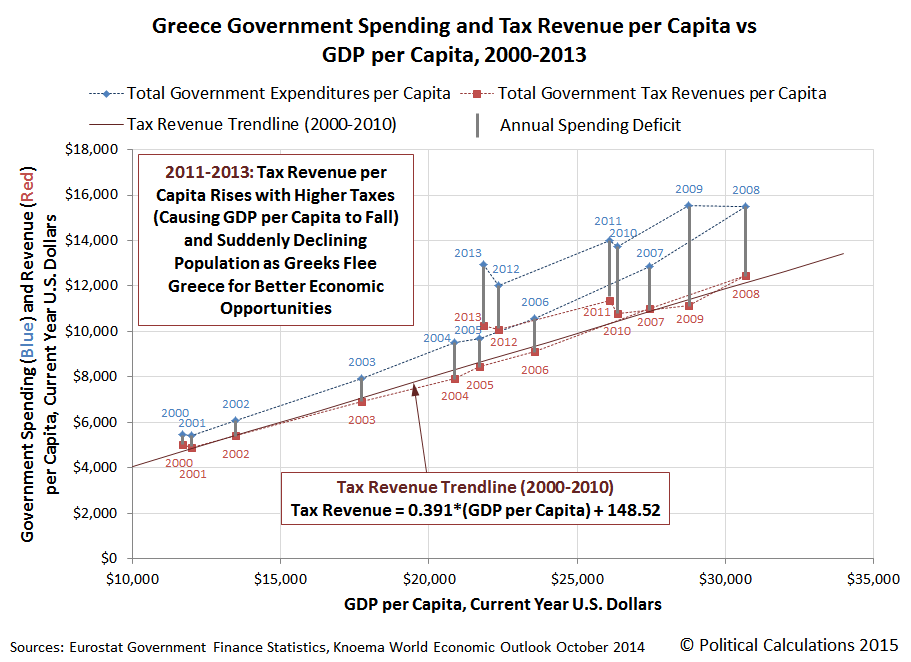 The collective impact of Greece's tax hikes were described back in 2013 after their real effects were first registered by the Greek Reporter:

Despite big tax hikes as part of austerity measures demanded by international lenders, tax revenues fell precipitously in January, with the Greek Finance Ministry reporting a 16 percent decrease from a year earlier, and a loss of 775 million euros, or $1.05 billion in one month.

The government took in only 4.05 billion euros ($5.47 billion) in tax revenues in January, far short of its target of 4.36 billion euros ($5.89 billion), a $420 million shortfall in one month, and during an annual holiday sales period for shops who are bleeding customers and shutting down by the thousands.

If Greece fails to meet revenue targets it will trigger a correction clause at the end of each quarter of the year, setting off automatic spending cuts except for pensions and salaries. That could further harm already-depleted government services.

Finance Ministry officials attributed the decline in tax revenues to the drop in consumption, as revenues from Value Added Tax (VAT) shrank by 15 percent, while those from the special consumption taxes were also lower. Greeks hammered by big pay cuts, tax hikes and slashed pensions have cut back spending even on essential items, with supermarket sales falling 500 million euros, ($6763 million) in 2012.

The numbers could have been worse as the government gained revenues from doubled property taxes and big hikes in income taxes that have hit most Greeks except for tax cheats who continue to largely escape sacrifice or prosecution.

Direct tax revenues increased by about 9 to 10 percent in January compared with a year earlier. Given the country’s devastating recession, which has created a record 26.8 percent unemployment and is in its sixth year, the only options left for the government is to collect from tax evaders and improve tax collections, although tax hikes have led to many more Greeks trying to hide their income, statistics showed.

Notice how the Greek Reporter doesn't even consider the possibility of the Greek government adopting effective policies for actually growing the Greek economy to reverse its plight. And in February 2013, they would also not be aware of the extent to which working age Greeks seeking better economic opportunities were abandoning the country, making it even more difficult to mount a recovery. 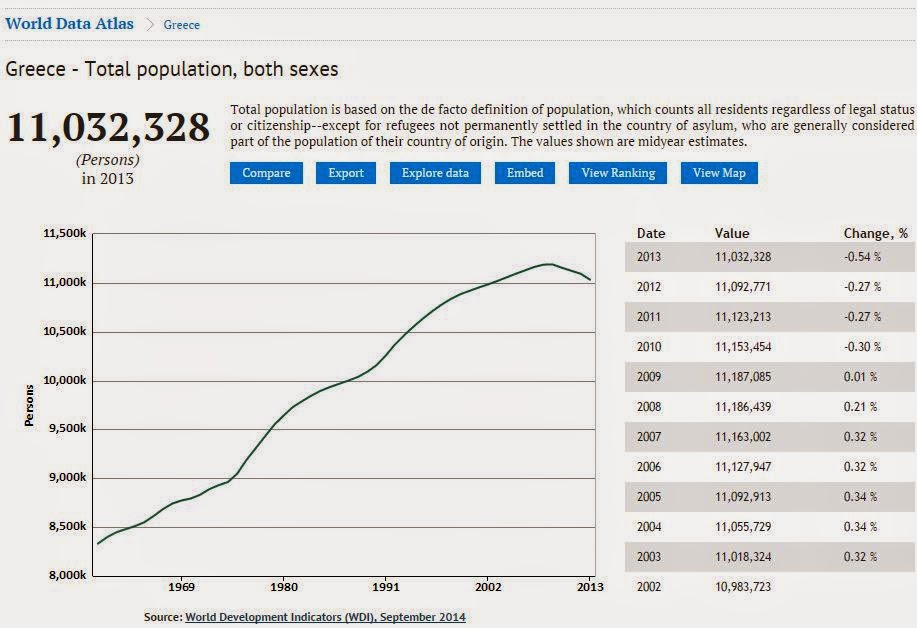 That Greece's new PM Tsipras identifies government spending as the main problem with the austerity imposed on Greece by the Troika is a concern because it suggests that he doesn't fully recognize what really made the Greek economy a basket case, with the practical consequence of that lack of recognition being that his government might not be ideologically inclined to take the most effective actions they can take to undo the most damaging element of the austerity measures that were imposed the country's previous governments.

The right course of action would be to combine fixing Greece's national balance sheet by writing off or renegotiating large portions of its unsustainable debts to the Troika and its other liabilities to be on more favorable terms with improving its economic growth prospects by reducing its exorbitant tax rates and its bizarre level of intrusive regulations on economic activities.

Implementing solutions that won't produce the needed spark to revitalize Greece's economy will sharply limit Greece to a future of lackluster growth, at best, or leave it even more impoverished, at worst. Tsipras' most certainly has his work cut out for himself - he doesn't need to make it harder by not using all of the tools he has to improve the lives of Greece's citizens.

Climbing a Debt-Driven Wall of Worry

In May 2011, we built a model illustrating the cumulative probability of default that a nation might have based on the midpoint of its 5-year Credit Default Swap spread, showing Greece was already at the highest position on the S-shaped "wall of worry" indicating a very high likelihood of default in the nation's future.

In May 2012, we determined how much money the Greek government was capable of collecting with respect to the nation's GDP per capita.

In June 2013, without trying very hard at all and with mathematical precision, we took data that was available in 2010 to show how a combination of minor government spending cuts and major tax hikes, in the absence of quantitative easing policies, wrecked the Greek economy.

Also in June 2013, we discussed the relative impact of changes in government spending and changes in taxation upon a nation's GDP.