How much might President Obama's executive action to "legalize" the immigration status of an estimated 5 million non-U.S. citizens who unlawfully entered the United States cost U.S. taxpayers?

That's not a difficult question to answer because President Obama has already told us how much he expects his potentially unconstitutional executive action will cost U.S. taxpayers through the budget of the U.S. government. [Note: These costs do not include the costs that will be incurred by state or local governments in the U.S.]

Specifically, we can find the answer by taking President Obama's spending requests for a number of welfare programs in his latest budget proposal, for the federal government's 2016 fiscal year, and subtracting the amount of money he requested to be spent on these programs in the years overlapping his budget proposal for the 2015 fiscal year.

The chart below reveals what we found when we did the math for the years 2016 through 2019, which are the ones that would be most affected by the President's executive action, as the amount spending for the federal government's 2015 fiscal year is almost completely locked in at this point in time: 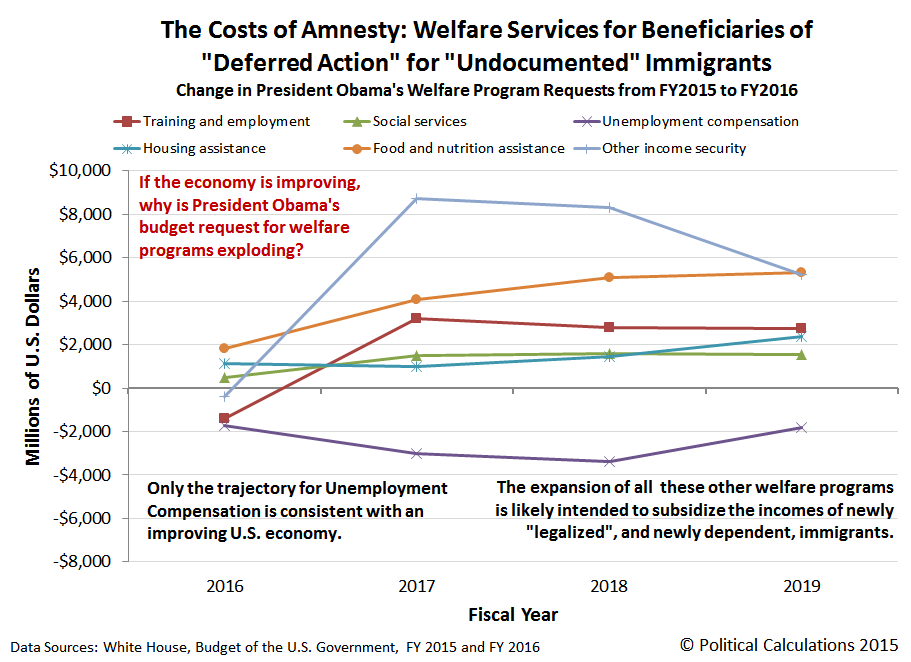 What's most important to recognize in this data is that the amount of spending for these welfare-related expenditures is directly tied to the health of the U.S. economy. Each of these expenditures will generally rise and fall together when the U.S. economy is going through periods of economic expansion or contraction, as large numbers of Americans either enter or exit welfare programs.

But what the data shows in the chart above is contradictory. President Obama's budget request for Unemployment Compensation points to a growing economy, while all the other welfare programs would seem to indicate a deep recession.

Since President Obama has recently stated that the economy is growing, a declining economy cannot be the explanation for the President's request to expand the federal government's welfare spending.

There are two other possibilities that could potentially explain the increase in spending for these welfare programs. First, the President could be massively increasing the amount of welfare benefits that will be given to each current welfare recipient. Second, the President could be proposing to massively increase the number of people who are eligible to collect welfare benefits.

President Obama's executive action to permanently defer deportation proceedings for over five million undocumented immigrants and to provide them with work visas would account for the increase in spending proposed for these welfare programs. The largest expansion would be the eligibility of these individuals to collect the Earned Income Tax Credit (covered under "Other income security"), with food stamps ("Food and nutritional assistance") following close behind. Here's how much President Obama's combined proposed spending on all these welfare programs outside of Unemployment Compensation changes in each year from 2016 through 2019, along with the amount of benefits that each individual covered by the President's executive amnesty would receive if equally divided among five million individuals:

Since it's unlikely that all of the 5 million individuals expected to be covered by President Obama's executive action would be eligible for these welfare programs, the welfare benefit amount per actual recipient would be larger than these figures. We should also note that these figures do not also include spending for Medicaid's health care services that these individuals would also be eligible to benefit from, since we do not have the data to split out the immigrant population from those who are being added to the rolls for that welfare program through the Affordable Care Act.

Immigrants requesting amnesty from deportation are charged an application fee of $485 per person, which consists of a $380 fee for processing their employment authorization application and $85 for collecting their fingerprints.

That's quite a return on investment for undocumented immigrants who would become both eligible for, and dependent upon, these U.S.' welfare assistance programs as a result of President Obama's executive action. At least, if we are to go by the amount of money requested by President Obama for these programs in his FY2016 budget proposal.