Since we were discussing Greece in our discussion of the debt capacity of nations in our previous post, we thought this might be an opportune time to update our chart showing the trajectory of the Greek government's spending per capita and its tax revenues per capita against the nation's GDP per capita now that we can update all this data through 2014 with the latest update to the International Monetary Fund's World Economic Outlook.

The results of that data visualization exercise are presented below. 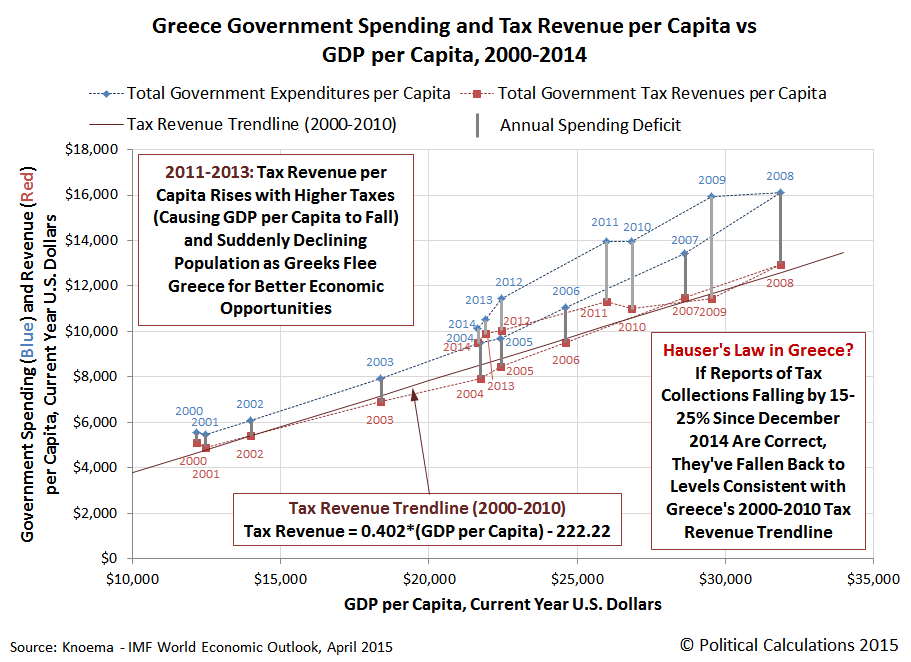 The most significant observation is that Greece has continued on its contractionary trajectory. Greece's economy has shrunk, causing the Greek government's tax collections to shrink, which has forced it to shrink its spending. In fact, in 2014, Greece's economy has basically returned to where it was a decade earlier, but with a higher level of spending and tax collections as compared to 2004.

It's important to note that these things are all interconnected. Previous Greek government administrations implemented large tax hikes in both 2010 and 2012, which negatively impacted Greece's economy. This is why we see the relative amount of tax collections rise for given levels of GDP per capita as compared to the period from 2000 to 2010, and also why we see both GDP per capita and tax revenue per capita never the less fall. Meanwhile, the Greek government has also had to significantly cut its spending to more affordable levels in response to its falling tax revenues and economy.

But perhaps the really interesting thing is what has happened to the Greek government's tax collections as its new government led by Prime Minister Alexis Tsirpas swept into power. Beginning in December 2014, as that outcome became likely, Greeks with the ability to refrain from making tax payments began doing so.

While that action has clearly strained the Greek government's fiscal situation, that's not what's interesting about it. It's the amount by which the Greek government's tax collections have fallen that stands out, where the data we have to date suggests has fallen to levels that, if they hold over a full year, would be consistent with the level of taxes collected in 2004 when the Greek economy last recorded a similar level of GDP per capita.

We suspect that might be the phenomenon of Hauser's Law at work. Here, once a nation has effectively maximized its ability to extract revenue from its population and businesses with respect to the size of its economy, it is essentially unable to collect significantly more than that percentage share for much more than a limited period of time regardless of how high it may set its tax rates. 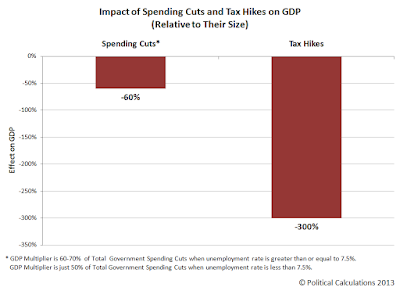 For the Greek government, that maximum level would appear to be about 40% of its GDP, which is the maximum level that it has largely sustained since 1995. While Greece's tax hikes of recent years has allowed the government's tax revenues to temporarily exceed that level in the period from 2011 through 2014, it is unlikely that higher level of tax collections can be sustained, which is why Greece's tax collections have really collapsed. It's really more of a surprise that they were at such an elevated level for as long as they were.

That's an important thing for both Greece's current government and its creditors to consider as Greece nears default on its debt payments. Until Greece can break its negative feedback cycle of tax hikes and economic recession, it will never be able to reverse its course. In the short term, the optimum solution would be for Greece's creditors to write off a significant portion of the short term debt whose payments are coming due in the next 18 months, while in return, the Greek government would commit to freezing its already reduced spending at current levels for up to 24 months and implementing modest tax rate reductions to reverse its economic trajectory.

That makes sense if the Greek government is only capable of collecting 40% of the nation's GDP in taxes, and we can all see in the chart above that the 2010 and 2012 tax rate hikes have already failed to produce sustainable higher revenues. Only a growing Greek economy can produce the outcome desired by both the Greek government and its creditors.

An interesting option for Greece's creditors would be to exchange the short term debt they would be asked to write off for GDP-linked warrants. This would allow them to recover a portion of the money they would otherwise lose outright, which would be enabled by the positive growth of Greece's economy.

But the real question is whether anyone among Greece's government or its creditors are smart enough to figure this strategy out before they commit to policies that ensure a much bigger default and failure.