Every three months, we take a snapshot of the expectations for future earnings in the S&P 500 at approximately the midpoint of the current quarter. Today, we'll confirm that the expected earnings per share for the S&P 500 throughout 2015 has continued to fall from the levels that Standard and Poor had projected they would be back in February 2015. 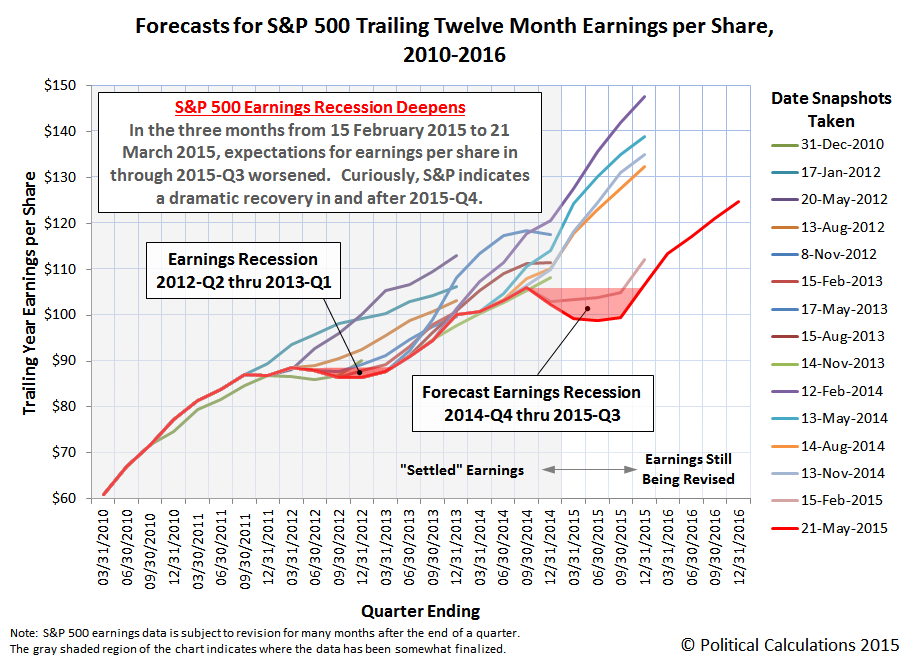 The table below quantifies the carnage for what can now be described as a deepening earnings recession, which Standard & Poor continues to forecast will run through the third quarter of 2015:

Much of the decline in earnings expectations is tied to the decline in global oil prices, which primarily affects the oil industry, and also affects the business outlook for financial institutions and capital equipment manufacturers.

What we find especially curious however is that S&P would currently appear to expect an exceptionally robust recovery in the S&P 500's earnings per share beginning in the fourth quarter of 2015, largely driven by the energy-related sector of the S&P 500 index. Based on what we see in the expected future for crude oil prices through the end of 2015, we don't think that earnings recovery based on improving revenues is well supported, unless a significant amount of cost reduction occurs within the industry. Since that reduction in economic activity would ripple outward from the energy sector and negatively affect other sectors of the economy, we think that the overall earnings for the S&P 500 would be likely to perform much less well than S&P currently expects.