A week ago, we went to the very specific trouble of spelling out three very specific "what-if" scenarios for the trajectory that U.S. stock prices, as measured by the closing value of the S&P 500, would take during the week to be. Thanks to optimal forecasting conditions, one of those scenarios was almost perfectly dead on target. 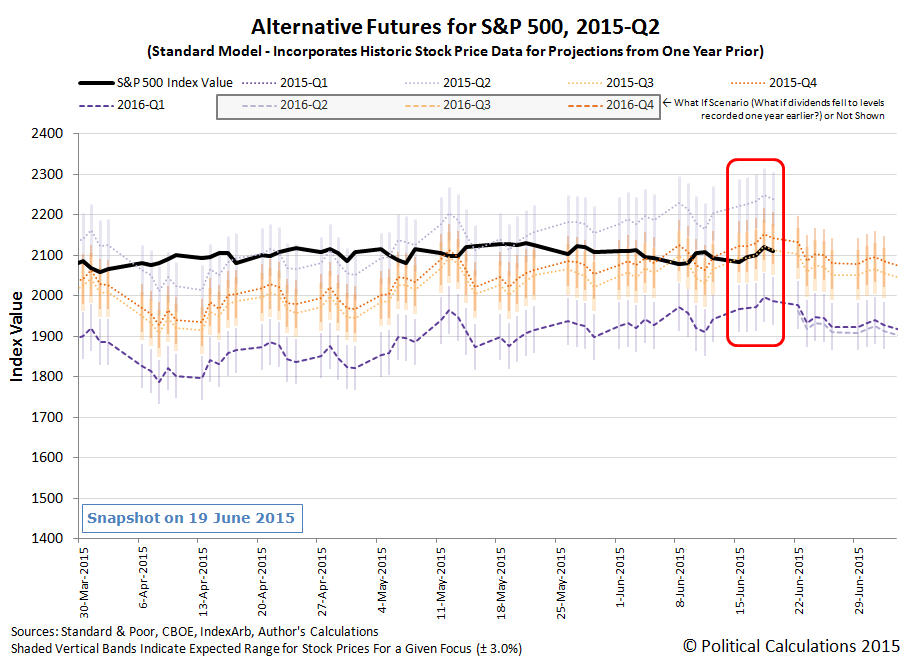 The what-if scenario in question is the one where we projected what the S&P 500 would be if investors were to shift their forward-looking focus to 2015-Q3 in making their current day investment decisions. As for what made our forecasting conditions optimal, we have to thank the relative absence of noise in the market, where the Federal Reserve's Open Market Committee meeting provided the primary market news for the week.

That news was that economic conditions had improved since the first quarter of 2015, which investors interpreted as indicating that the Fed would be likely to act sooner rather than later to start hiking short term interest rates, which had become the dominant expectation on Monday, 15 June 2015. Although the Fed did not commit to a specific timetable or other details for its interest rate hiking plans, our standard model suggests that the stock market behaved in a way that is fully consistent with investors shifting their focus from 2015-Q4 in the previous week to instead fix their focus on 2015-Q3 and then holding it there through the end of the week.

So how come we couldn't have specifically forecast that specific trajectory? Why would we go to the very specific trouble of forecasting three separate likely trajectories for stock prices that differed only by how far in the future investors might focus their attention?

Well, as we keep saying, it is because stock prices obey the rules of quantum physics, where stock prices actually exist in a state of superposition, much like atoms and subatomic particles.

One mind-boggling consequence of quantum physics is that atoms and subatomic particles can actually exist in states known as "superpositions," meaning they could literally be located in two or more places at once, for instance, until "observed" — that is, until they interact with surrounding particles in some way. This concept is often illustrated using an analogy called Schrödinger's cat, in which a cat is both dead and alive until beheld.

Superpositions are very fragile. Once disturbed in some way, they collapse or "decohere" to just a single outcome.

For stock prices, the things that exist in superpositions are the expectations for the amount of cash dividends that will be paid out by specific points of time in the future, so we automatically have the situation where multiple expectations exist simultaneouly in the market. When investors observe, or in our terminology, "focus" upon a specific point of time in the future in response to new information as it becomes known, stock prices will collapse or decohere to a single outcome that is consistent with the expectations for dividends at the point of time they've focused upon within a relatively small margin of error - at least, given the amount of noise that typically exists in the market.

That situation applies when nearly all investors shift their attention to a single point of time in the future. There have been times when we've observed investors splitting their forward-looking attention between two separate points of time in the future, with stock prices falling between the "100% focused" trajectories our model forecasts, with stock prices being weighted accordingly with respect to the percentage split in investor focus.

As you might imagine, depending upon how different the expectations are for different points of time in the future, changes in stock prices that result from shifts in how far ahead in time that investors are focusing their attention can be very pronounced. Those shifts are a major contributor to volatility in the stock market when they occur and account for much of the apparently chaotic behavior of stock prices.

Knowing all that then, projecting the future trajectories of stock prices with some degree of accuracy is a complex proposition, but not a difficult one once you have the data that applies for each future point of time whose expectations for dividends are known. Anybody who can solve a simple quantum kinematics problem can do it.