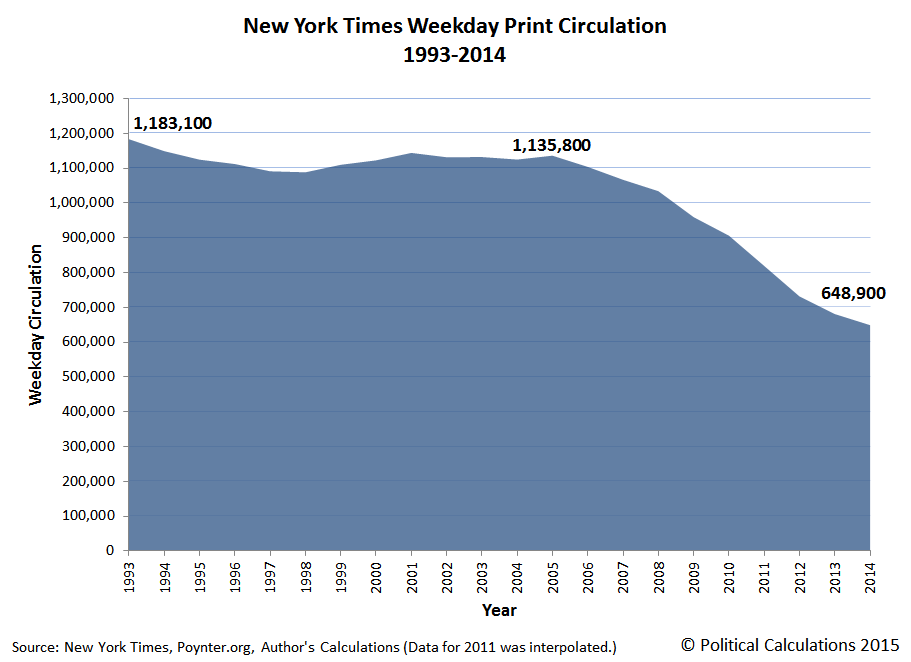 The New York Times has been seeking to transform itself into a primarily digital entity, as the company has gone from zero paying digital subscribers in 2010 to 910,000 in 2014. The company will likely surpass one million digital subscriptions by the end of the second quarter of 2015.

While that change has been going on, New York Times has also been transforming itself into primarily a national entity, rather than a regional one. The company's 2014 annual report is the first that provides no breakdown of how its circulation is divided between the 31-county region that had defined its "home" market and the rest of its circulation.

In 1993, the New York Times 31-county home market had accounted for 64% of its total weekday circulation. As recently as 2013, that figure had fallen to 43%, which had been buoyed up in part from previous years by its recent increase in digital subscriptions.

Since beginning its digital conversion after 2009 when it had a total revenue of $1.58 billion, the New York Times Company's revenues have fluctuated between a low of $1.55 billion (2011) and a high of $1.60 billion (2013), falling to $1.59 billion in 2014. Since 2009, the company has largely exchanged revenue from advertising, which has fallen from $797 million to $662 million, for revenue from circulation, which has increased from $683 million to $837 million. Combined, those changes represent a net gain for the New York Times Company of $19 million in revenue over the last five years.

It certainly can be a lot of work to just tread water.