Last week, we indicated that stock prices in the U.S., through Tuesday, 14 July 2015, were "running hot" and were "almost 3% higher than they might otherwise be" because of positive news regarding the resolution of Greece's debt default crisis.

Through the close of trading on Friday, 17 July 2015, U.S. stock prices, as measured by the S&P 500 index, remain almost 3% higher than they might otherwise be.

How do we know that?

Fortunately for us, the last two weeks have provided nearly optimal conditions for being able to assess what's behind the movement of stock prices using our standard model. With Federal Reserve Chair Janet Yellen set to testify before the U.S. Congress on Wednesday, 15 July 2015, she and a majority of other Fed officials had been working overtime over the preceding two weeks to provide investors with forward guidance on what to expect for when the central bank would begin hiking short term interest rates. The expectation they were seeking to set is that the Fed would act by the end of the third quarter of 2015 to begin raising its effective Federal Funds Rate above the 0-0.25% range where it has been set since December 2008.

According to the WSJ's July 2015 survey of private forecasters, they've been successful in setting that expectation for the future. 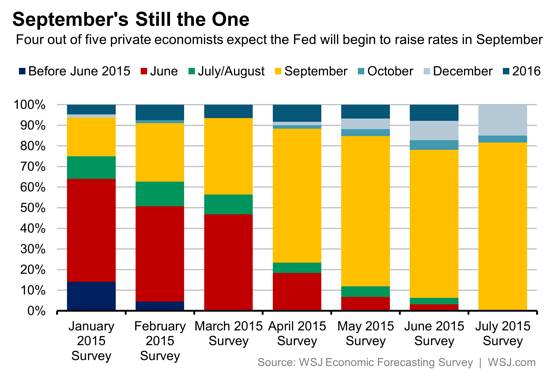 That's significant information where our analysis is concerned because of how we set the simple scale factor we use in our model of how stock prices work. Given its tremendous influence over the future expectations of investors in recent years, we've used the statements provided by influential Fed officials about its planned future actions for when it would begin increasing the Federal Funds Rate around the times of the Federal Reserve's Open Market Committee's meetings to first empirically determine that scale factor (it's about equal to 5 when used with the CBOE's dividend futures data) and to subsequently verify and periodically confirm the calibration of that scale factor as those meetings occur. We therefore know from the FOMC's last several meetings that our model scale factor is currently very well calibrated.

That strong calibration then means that during times when U.S. investors are closely focused on the forward guidance being provided by Federal Reserve officials, as they have been during the last two weeks, we have the ability to isolate and measure the effect of other factors upon U.S. stock prices that might otherwise be indistinguishable from the typical level of noise that exists in the U.S. stock market.

And in the last two weeks, nearly all of that extra noise has come from two places: Greece and China. Between the two, the actions that China's government took to avoid having its stock market crash turn into a cascading failure for the nation's economy would appear to have been somewhat effective in halting its decline. The impact on the U.S. stock market has been neutral however as the momentum needed to fully reverse the declines in China's stock markets has yet not developed.

Meanwhile, the capitulation of the Syriza Party-led government in Greece to that nation's international creditors, in which the divided party's leaders suddenly reversed the course of action they had been following to instead accept even more severe terms from their creditors than those they had previously rejected in order to be bailed out and by doing so, to avoid the full collapse of Greece's economy on their watch, contributed more significant positive noise to the U.S. stock market.

We describe that reaction as noise because as yet, there has not been a significant change in the cash dividends expected to be paid out by U.S. firms by the end of 2015-Q3, the point in time to which the Federal Reserve has succeeded in focusing the attention of U.S. markets, to support the current valuation of stock prices. Unless that changes so that the amount of cash dividends is increased to support stock prices at their current elevated level, we can reasonably expect that stock prices will adapt accordingly. At least, in the absence of additional noise or a shift in focus by investors to a different point of time in the future.

And though we previously said that we would be retiring our alternative futures chart based on our standard model for the year, we're bringing it back one last time because we really don't have a better one to illustrate what our model is communicating. 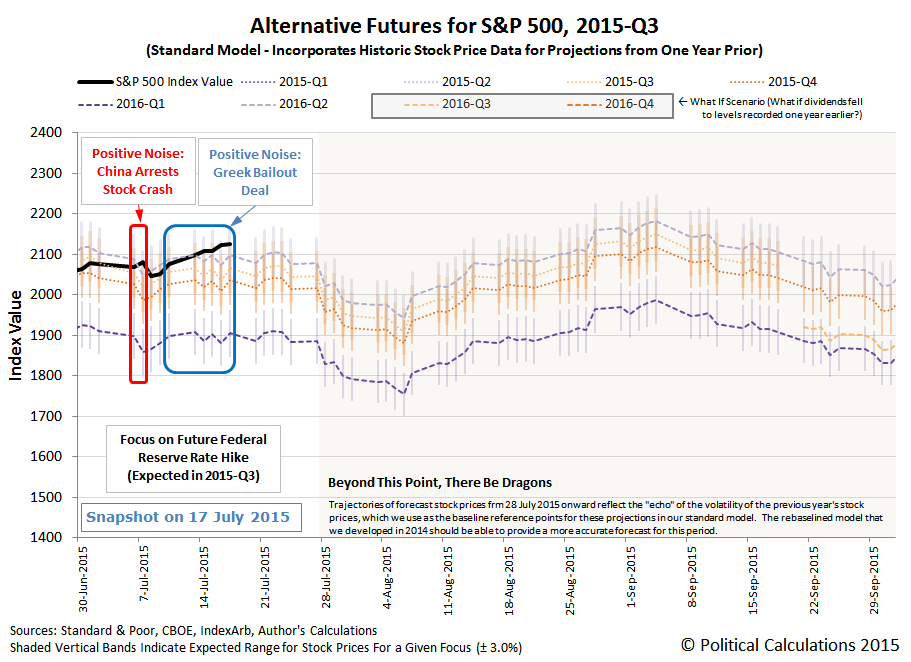 We wonder how much of the recent extraordinary effort by Fed officials to focus U.S. markets on the third quarter of 2015 in their efforts to manage expectations was driven by the desire to insulate and provide stability to U.S. markets that might otherwise have become quite volatile in response to the financial crises in China and Greece.