Political Calculations
Unexpectedly Intriguing!
August 25, 2015
The Revenge of the Noise of Summers

A little over two years ago, the suggestion that Larry Summers was likely to be appointed to be put in charge of the Federal Reserve was enough to make the stock market swoon.

Fortunately, that never happened, but yesterday, Larry Summers may very well have had his revenge, thanks to the coincidental timing of his op-ed in the Washington Post, in which he encouraged Fed officials to back off their established plan to hike short-term U.S. interest rates in September 2015 (emphasis ours):

Federal Reserve officials have held out the prospect that at long last they may raise interest rates at their September meeting, with the hike taking effect by year’s end barring major unforeseen developments. A reasonable assessment of current conditions suggests that raising rates in the near future would be a serious error that would threaten all three of the Fed’s major objectives: price stability, full employment and financial stability.

Although Summers has chronically read the market situation incorrectly over the last several years, his viewpoint is still important because it reflects the way that a significant number of influential people think. Such as the people who have been nominated to the U.S. Federal Reserve over the last 20 years, who might as well all march to the same drumbeat.

Because of that factor, and because of the increasing pressure that the Fed is now coming under to avoid taking its long-planned action, stock prices fell far more on Monday, 24 August 2015 than they might otherwise have if investors believed that the Fed would hold to its plans to announce it will hike rates almost three and a half weeks from now.

The reason that investors are making that call now is because they anticipate that the situation for the U.S. economy will be worse going forward than the data the Fed has claimed it is dependent upon for making its plans has indicated to date.

Believe it or not, that's good news for the Fed should stock prices continue to decline this week. Since the current worst-case potential bottom for the market is defined by the expectations for the change in the year over year growth rate of dividends per share that will be paid out in the first quarter of 2016, which would be the quarter that investors are now most likely now factoring into their outlook, the Fed won't have to engage in any extraordinary measures like quantitative easing to prop up the U.S. economy unless and until the economic situation clearly deteriorates significantly beyond that level. 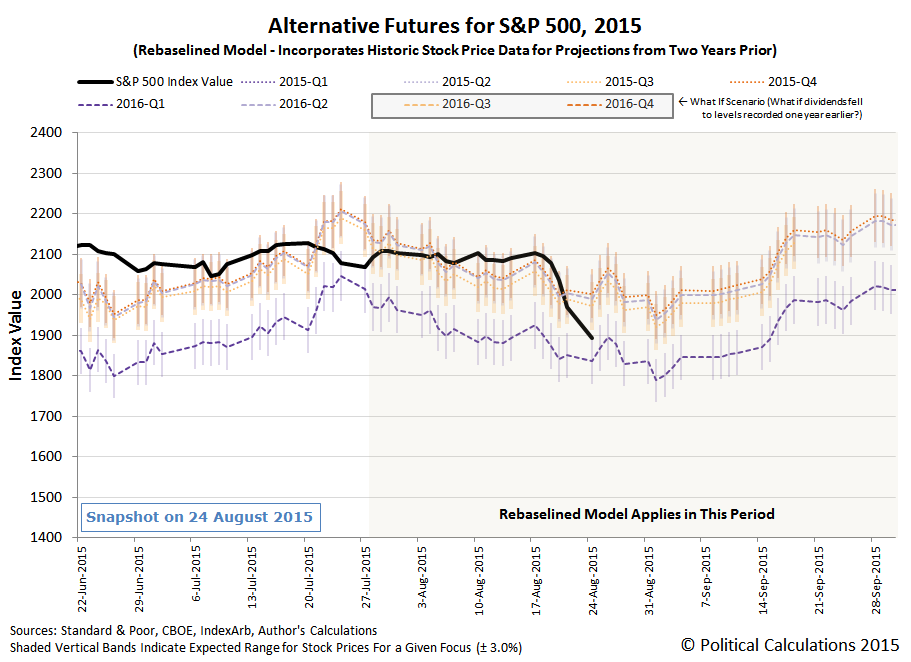 That matters because the one thing that the Fed officials would really rather not do is to load up its balance sheet by initiating a another new round of quantitative easing. Especially if the nation's economy is really performing as well as the data they follow indicates.

So what should the Fed do? We would suggest that the Fed do nothing, but in a creative way. The Fed should announce that it will indeed hike short term interest rates as planned in September 2015, and at the same time, that it will also initiate a new round of quantitative easing, initially at a low value with the amount being data dependent with respect to actual economic conditions within the U.S. economy, with the stated goal of achieving a nominal GDP growth rate target it believes it can attain by the second quarter of 2016.

These two actions would arrest the decline of U.S. stock prices by focusing investors on the more positive expectations associated with these two quarters, while at the same time doing nothing, as the new QE initiative would offset the perceived tightening of monetary policy from the interest rate hike.

Then, if the Fed really wanted to get some stimulative power going that would allow them to both raise interest rates and to successfully terminate their quantitative easing program once and for all, they should announce that they will terminate their new QE program by the end of 2016-Q2 unless the nation's tax rates and regulatory burdens on economic activities are reduced by that time, with the goal of generating real economic growth with minimal economic distortions.

With the large positive impact that tax cuts have on economic growth through the multiplier effect, and by committing to continue its new QE program until the benefits take hold, the Fed would create its desired environment where it would be able to both raise interest rates and terminate its QE program.

What's the point of being the U.S. economy's 800 pound gorilla if you don't periodically act the role? And as the U.S. government's most powerful creditor, it has the leverage it needs to achieve those goals by forcing positive changes in the federal government's fiscal policies.

We bumped our publishing schedule this week to accommodate the rather remarkable market activity today, including a look at how the U.S. stock market is signaling that its earnings recession has significantly deepened over the last three months, which we'll now feature on Wednesday, 25 August 2015. On Thursday, we'll update our primary indicator of the relative health of the U.S. economy, the number of companies announcing dividend cuts, where we'll show that the economy through this point in August 2015 is doing the best it has all year long.

It's not your imagination. The stock market really is sending very mixed signals at present.

And then on Friday, we'll change gears, unless something interesting happens with the stock market between now and then. As a general rule of thumb, we don't find the daily action of the stock market interesting unless it changes by more than 2% of its previous day's closing value.

Until then, by request, here's an update of our "broken order" chart showing, well, that order has broken down in the U.S. stock market: 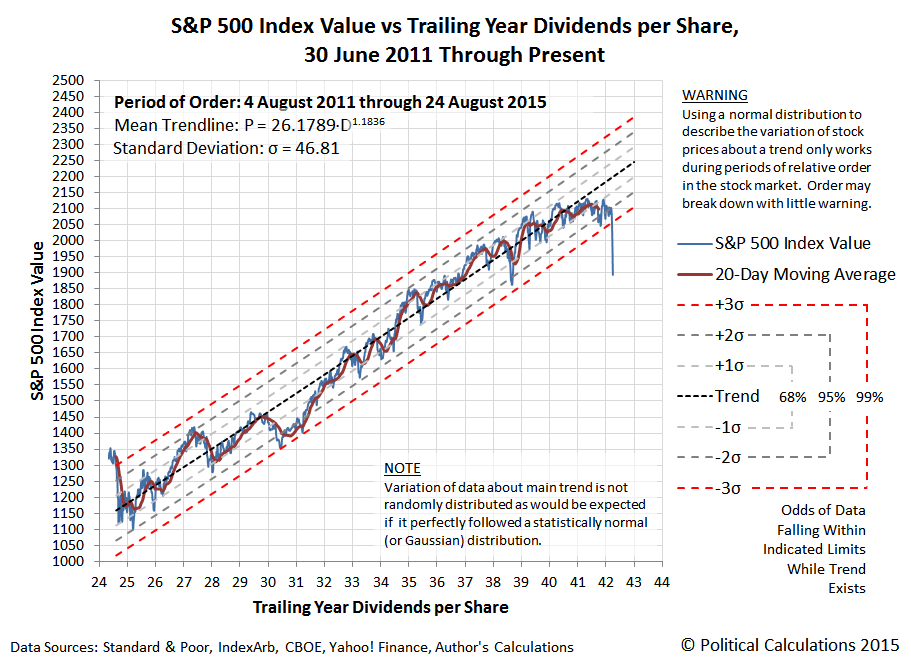 Plus, as a bonus, here are our calculated odds of a losing streak in the S&P 500 for each potential duration for which we have the data: 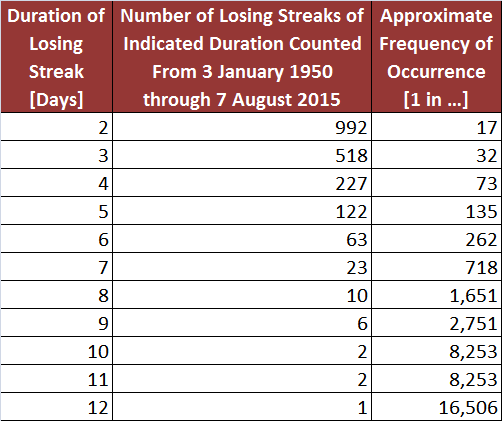 The longest losing streak on record for the S&P 500 is 12 days. In the last 65 and a half years, there has only been one losing streak that ran that long....