In 2009, the University of Phoenix degraded its academic standards for assessing student performance in its math classes. The University of Phoenix achieved this result by recommending to its instructors that they decrease the emphasis that they had previously mandated for students to demonstrate their proficiency in solving assigned problems in favor of increasing the weighting of the subjective evaluation of student participation in class discussions in determining student grades.

Our chart below, which we based on information contained within different versions of the course syllabus for a University of Phoenix Algebra class that captured these changes, graphically reveals how those changes would effectively inflate student grades. 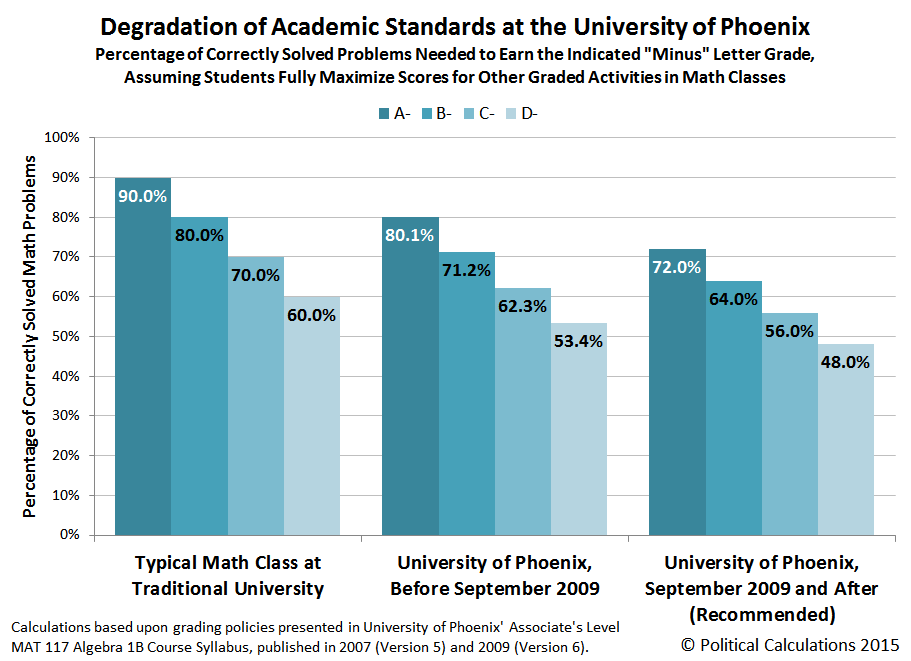 We wondered to what extent similar practices that would result in grade inflation in math classes might have been implemented at other accredited colleges and universities. In the table below, we've presented the relative weighting that subjective, non-math related criteria has upon determining the grade that a student might earn at the indicated institution, based on the course syllabii they have published for their own math classes, which we've linked in the table. We then ranked them in order from best to worst....

Some interesting takeaways from what we found in our analysis:

And even with that competing standard for low academic performance, when it comes to math, the post-2009 Univerity of Phoenix is still at the bottom of the academic barrel by a pretty wide margin.