We're going to pick up where we left off almost two weeks ago by beginning with a look at the acceleration of the year over year growth rate of stock prices against the backdrop of their fundamental driver: the expected change in the growth rate of trailing year dividends that will be paid in the current and next three quarters of the future. 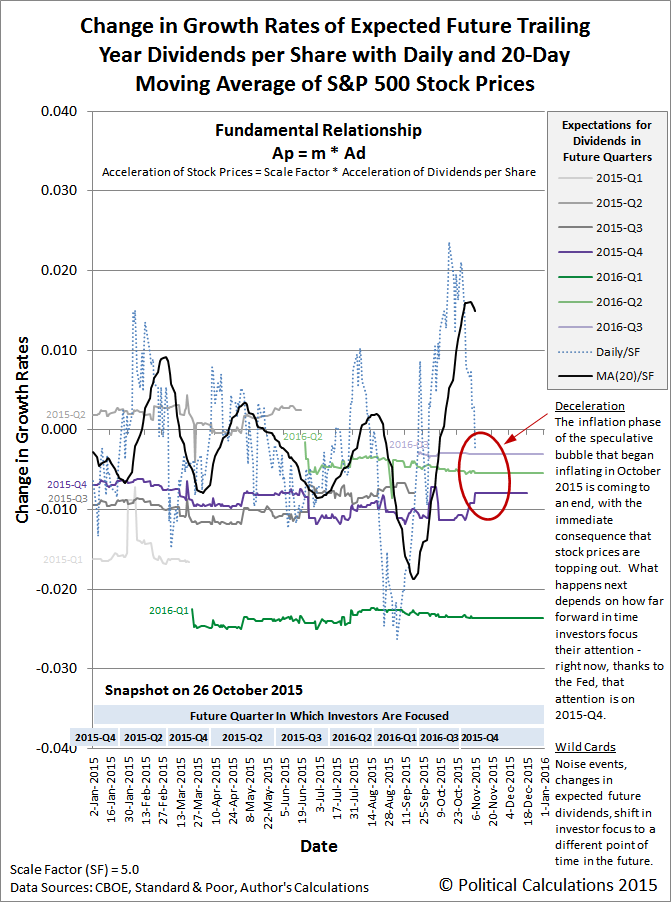 What we find is that the inflation phase of the short covering-fueled Lévy flight rally that had opened at the beginning of October 2015 is coming to an end, as the acceleration of stock prices is rapidly converging to the level that is consistent with where the levels of dividends expected in future quarters are.

Thanks to the combination of Fed Chair Janet Yellen's congressional testimony on 4 November 2015 and a much stronger than expected jobs report for October 2015, we know that investors are now strongly focused on the fourth quarter of 2015 in setting stock prices.

Since future stock prices depend in part on what they are today, the rapid change from the positive acceleration that took place to the negative acceleration associated with investors being focused on 2015-Q4 in setting stock prices will coincide with the deceleration of stock prices as they will first top out and then transition to following a modestly declining trajectory, as they converge to the level of acceleration that would be consistent with that indicated by dividend futures contracts for 2015-Q4.

What that means for the likely future trajectories of stock prices is shown in the following chart, which shows what our standard model of how stock prices work projects through the end of the year, give or take the typical levels of day-to-day volatility for the stock market. 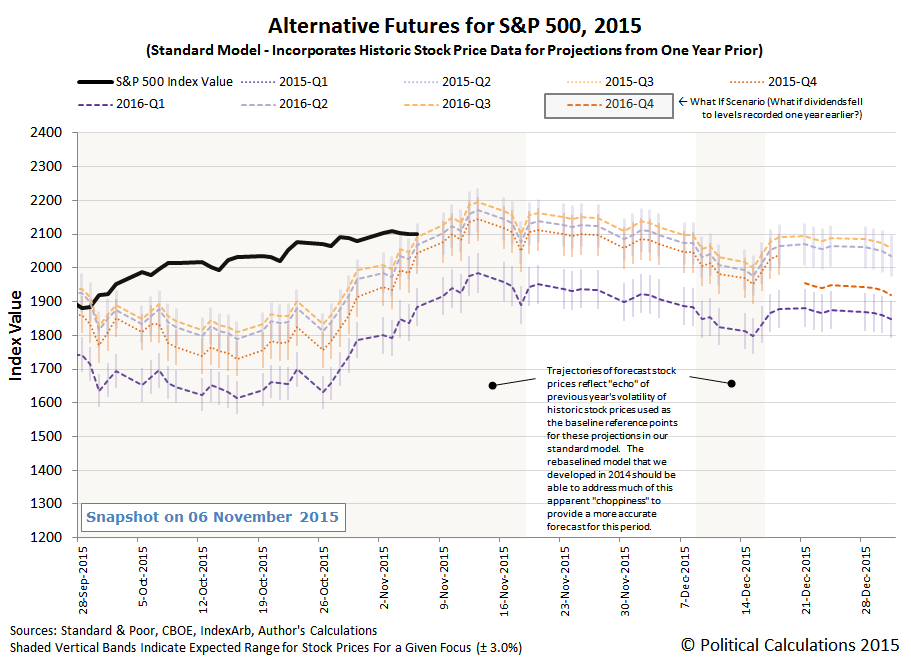 Our standard model for forecasting future stock prices directly reflects the data we show in our accelerations chart above, as we expect that we are entering a period where it will once again more accurately reflect the likely trajectory of U.S. stock prices than the rebaselined model we had switched to using at the beginning of the quarter. The shaded regions of our alternative futures chart indicate where our refined analysis of the historic stock prices that we use as the baseline for future projections indicates the periods in the quarter where our rebaselined model would likely be more accurate.

As we noted two weeks ago, all noise events end - it is only ever a question of when. The noise event represented by the October 2015 rally in stock prices is now rapidly coming to its end.

Going forward, a shift in the forward-looking focus to 2016-Q2 or 2016-Q3 would tend to put U.S. stock prices on a slightly higher trajectory than the one we've projected for 2015-Q4, but a shift in focus to 2016-Q1 would coincide with a significant decline in stock prices, similar to what we observed in late August 2015.