Yesterday, we used global atmospheric carbon dioxide data to refute the claims of a team of climate scientists that an reduction in the amount of man-made emissions of the gas had occurred in the absence of a recessionary conditions, particularly in China.

Today, we'll look closer at the international trade data that supports our refutation. In the chart below, we've calculated the exchange-rate adjusted year over year growth rate in the value of goods and services that the U.S. and China trade between each other, based on data collected and reported by the U.S. Census Bureau. What you'll see is that the value of goods that China imports from the United States has been in negative (recessionary) territory in the months from September 2014 through May 2015, and then mostly at low positive values in the months since, which covers much of the period of time considered by the climate scientists in their flawed study. 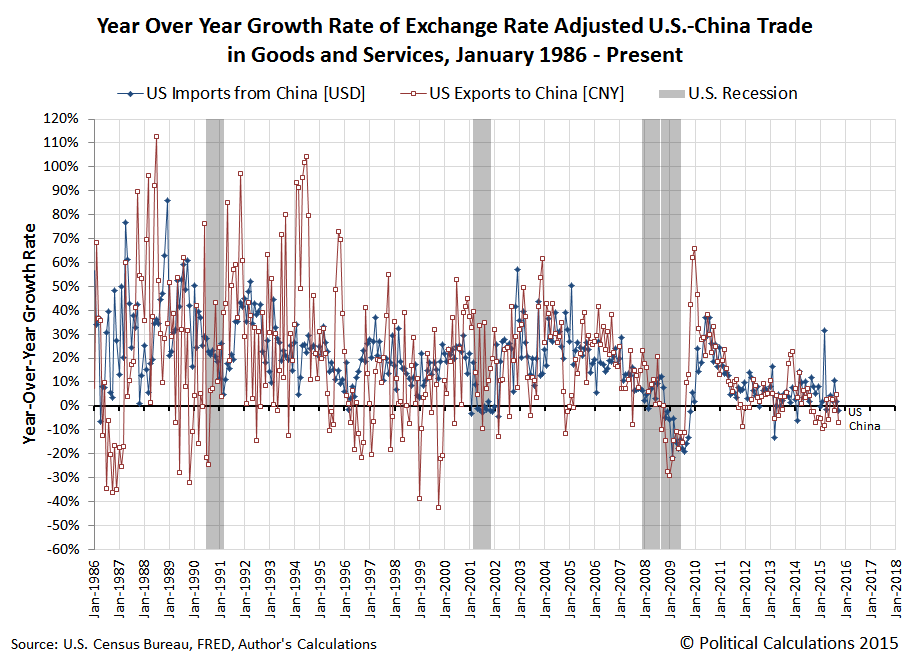 But looking at the just reported data for October 2015, we see that the year over year growth rate of the value of goods imported by the U.S. and China from each other has fallen into the dreaded negative territory that is an established indicator of global recession.

For the U.S., that's probably a good indication of the relative health of the U.S. economy for October 2015. But for China, maybe not so much....

Here's why. The growth rates we calculate are based on the value of all goods and services traded between the U.S. and China, which depend upon two factors: the price and the quantity of the goods and services being offloaded in the ports of each nation.

In recent years, the value of goods that China imports from the United States peaks in the final three months of the the year, which coincides with the U.S.' export of agricultural goods, where crops like soybeans represent a significant portion of the goods being exported to China during this period of time.

Compared to last year however, the price of soybeans in October 2015 is about 14% lower than they were twelve months earlier. (Similar declines apply for other export crops). 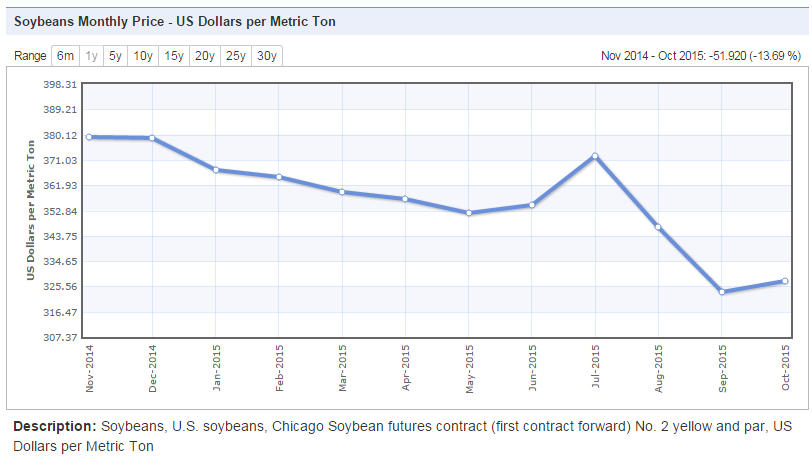 But the year over year exchange rate-adjusted growth rate of the value of goods that China is importing from the U.S. shown for October isn't down by 14% - it is instead only down by 7%. That would indicate that China is importing a larger quantity of soybeans from the U.S. in 2015 than it did in 2014, suggesting growth in its domestic economy, which coincidentally is also supported by the just reported global atmospheric carbon dioxide data for October 2015, which in turn indicates growth in the economy of the world's largest producer of carbon dioxide emissions during the month.

Clearly, there's much more to what the U.S. exports to China than soybeans, but for the month of October 2015, soybeans alone represent just shy of 25% of the value of all the goods the U.S. exported to China during the month, the largest single line item on the U.S.' bill of lading.

That's not to say that all sectors of China's economy are performing well at this time - China's commodity producers are indeed experiencing some degree of distress resulting from greatly reduced domestic demand for their goods, which in turn is negatively impacting the global economy - particularly in nations whose industries have grown to support China's previous appetites. That factor alone gives us the concern that China's economy may be experiencing something like a proverbial dead cat bounce, where the apparent improvement in recent months might be short-lived.