Three of those 295 biggest drop days during the past 65+ years have been in January 2016 - a month that's barely now half over.

So why are U.S. stock prices bouncing around and dropping as much as they are?

Last week, U.S. stock prices bounced around and dropped as much as they did for two reasons: investors learned that the U.S. economy performed considerably worse through the end of 2015 than they had been led to believe, and then Fed officials couldn't get their acts together on a consistent message for shaping investor expectations for the timing of the central bank's next rate hike.

Let's update our alternative futures chart to show how the S&P 500 bounced around as investors were shifting their focus back and forth between 2016-Q1 and 2016-Q2. Update: 11:18 AM EST: Corrected actual closing value for S&P 500 on 15 January 2015 (erroneous previous version of chart available here). 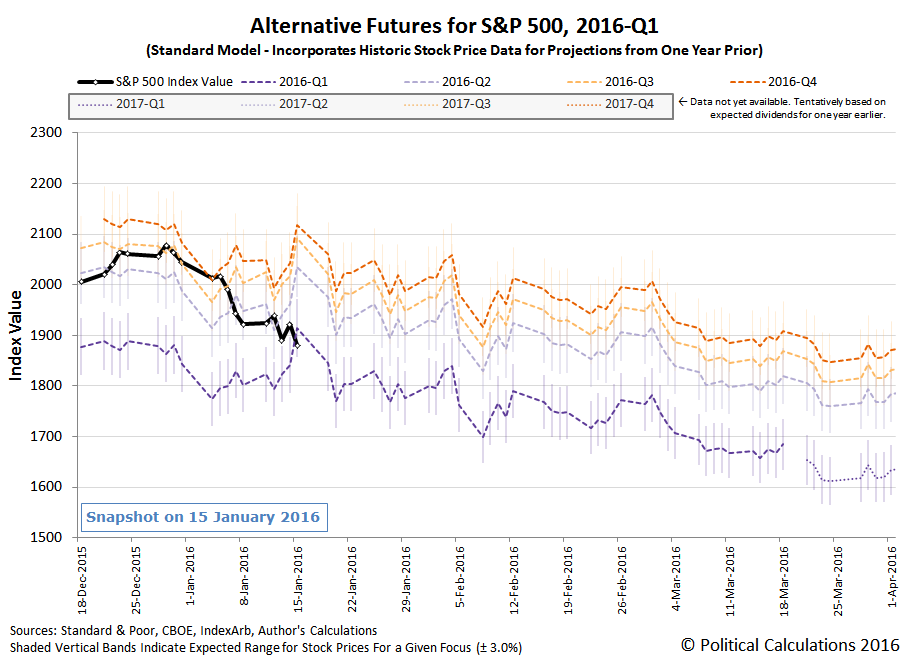 To see how that outcome came to be, let's review the major market driving events of the last week, picking up from where we left off in our previous analysis, when investors were mostly focused on 2016-Q2.

The increase in stock price volatility now compared to earlier in January 2016 is directly attributable to the rather large difference in the acceleration of the growth rate of the S&P 500's dividends per share expected for 2016-Q1 and 2016-Q2. Whereas the differences between 2016-Q2, Q3 and Q4 are relatively small, meaning that shifting focus between these quarters would therefore occur within a comparatively narrow range of stock prices, that investors are now shifting their forward-looking attention back and forth between the wide difference between 2016-Q1 and 2016-Q2 means that the S&P 500 is in for a wild ride while that continues.

We were asked a really good question on Tuesday, 12 January 2016 over at Seeking Alpha about how to interpret the short-term volatility indicated in our alternative futures chart, specifically as it relates to what it is projecting for the past and next week:

So according to the charts, is there a one week relief rally and then a second dive to 1800?

Here is our same-day response (pay close attention to the last three paragraphs):

Not necessarily. Because we use historical stock price data as the base reference points from which we project future stock prices, the trajectories shown can echo how stock prices behaved at those earlier points of time. When those prices were more volatile than is typical over a short period of time, the echo of those earlier events can show up in our projections as a short run rally or trough.

For really large scale echoes, such as what we'll see later this year when we get to August on the anniversary of the "China crash", we'll go to the trouble of resetting the baseline reference stock prices that we'll use in our projections. We did that for much of the latter portion of 2015 and had better accuracy with our rebaselined model than did our standard model during the period where the historic stock prices we would otherwise have used experienced larger than typical levels of volatility.

[Although it's something of a headache to deal with, one of the advantages of using historic stock prices as we do is that we have a very good idea in advance when our standard model of how stock prices work will be most effective and when we need to adapt it to account for the echo effect.]

As for whether stock prices will take a second dive in 2016 - that will depend more upon why and when investors might shift their focus from one future quarter to another. Right now, they would have to fully shift their attention to 2016-Q1 to get down to 1800, which became less likely given Atlanta Fed president Lockhart's comments yesterday afternoon (you can tell within a few minutes of when he made them in a one-day chart!)

To get there, we think that other Fed officials would have to contradict Lockhart's comments to refocus investors on 2016-Q1, or alternatively, a spate of really bad news could do that as well, especially if it might affect the expectations for dividend payouts.

That said, once investors set their focus on a particular point of time in the future, investors should expect stock prices to generally drift downward over the quarter. If they select 2016-Q3 or 2016-Q4, we'll have a sharp rally before that drift sets in. If they select 2016-Q1, we'll have a crash before that happens. Or if they stay focused on 2016-Q2, we'll mostly likely skip both the rally and the crash and just have the downward drift.

At least, that was how we saw it back on 12 January 2016. Since then, the relative position of actual stock prices on our alternative futures chart has changed, which changes the story for a shift in focus to 2016-Q2, which would now coincide with a small rally. At least, going into this next day of trading, Tuesday, 19 January 2016.

As the data changes, so will our projections of the alternative futures for the S&P 500.