It's time for the Academy Awards once again, which our longtime readers know fills us with an overwhelming sense of imminent doom.

What would it take to make watching the annual awards ceremony into a more tolerable experience?

We're serious. What would it take? Because the producers and writers for the awards show certainly don't have any good ideas, and try as we might, there just is not enough beer in the world to make it better....

But then, we suddenly and unexpectedly found reason for hope, when the answer became apparent thanks to Ryan Reynolds' last minute Oscars campaign to get Deadpool nominated for Best Picture. 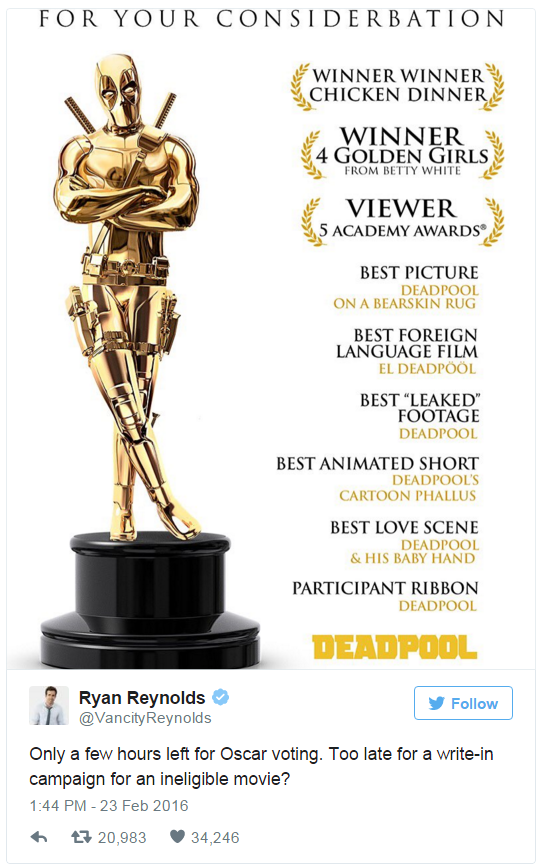 Although technically ineligible for consideration by the temporally-constrained members of the Academy of Motion Picture Arts and Sciences, who limited the nominees to just those films shown in U.S. theaters in 2015, it's exactly what the Academy needs to really shake things up. Otherwise, we'd be stuck with a bunch of not-so-popular films of questionable watchability that were nominated purely on the basis of their artistic merit.

If you're like us, your gag reflex was triggered when you read the last two words of that previous sentence.

That's because you, like us, know that Hollywood only really cares about two things: money and status. Hollywood people absolutely obsess over both things, where success is defined as either making lots of bucks at the box office or by achieving status through the recognition of their artistic achievements by their peers.

They use Oscars to measure their status as "artists", where the biggest winner gets the Oscar for Best Picture. In making that determination, voting members of the Academy will go off to a dark room, whip out their complimentary viewing copies of the nominated films, and then compare them to each other over and over again until they've ranked one above all others. The winner is then awarded with the peer recognition of their artistic status in the form of a 13.5-inch tall gold-plated phallic trophy.

That's why upsetting all the Academy's apple carts by getting a more popular movie like Deadpool into consideration for Best Picture of 2015 is such an attractive idea, and all the more so because Deadpool so clearly captures the vital essence of what drives Hollywood itself.

And by the other measure of success in Hollywood, money, Deadpool has already beaten all the contenders for Best Picture of 2015. At least, through its first full week of release: 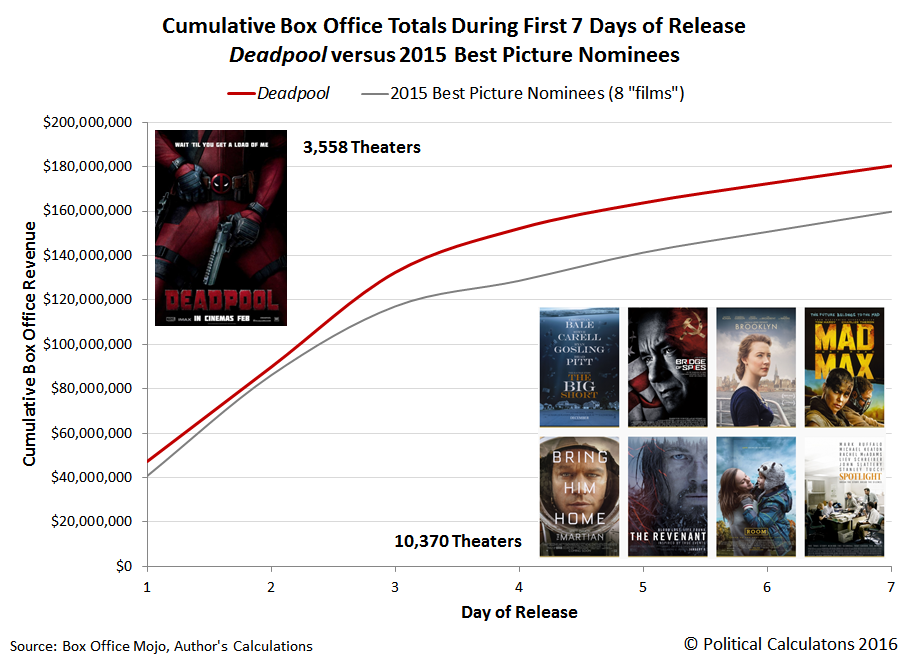 Which is why Hollywood is talking about Deadpool 2 and not The Revenant 2. Unless perhaps the producers of that other sequel fix the main deficiency of the first one.