Political Calculations
Unexpectedly Intriguing!
16 February 2016
Dividends: Back in the Red Zone and the S&P 500 in Week 6 of 2016

That same chart also showed that the last time that the number of dividend cuts were below the level that would indicate some form of recessionary conditions being present in the U.S. economy was October 2013.

Keeping in mind that all of this information is, thanks to our regular reporting on the topic, really old news, we had to laugh as none other than the New York Times finally realized that an elevated number of dividends cut announcements do, in fact, indicate some degree of distress occurring in the nation's economy. Just 11 days after we scooped them on the basic story. Again. 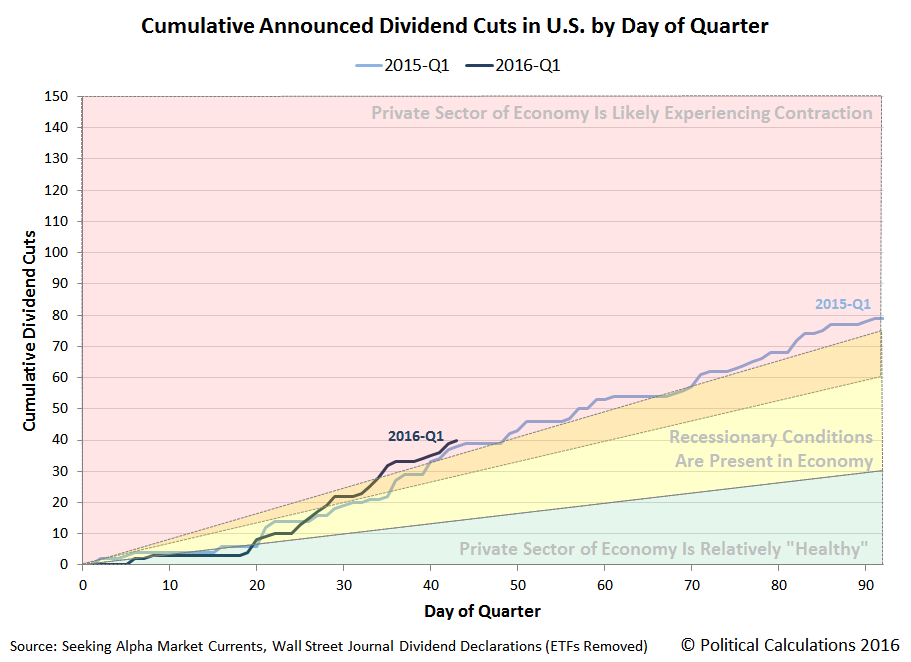 We observe that while the pace of dividend cuts in 2016-Q1 got off to a slower start than they did in same quarter a year earlier, they have escalated to their current level at a much faster pace than they did in 2015-Q1. At present, they are just slightly higher than they were at this same point of time last year.

Both quarters were in the contractionary red zone of our chart. In 2015-Q1, that corresponded to a quarter in which the real GDP growth rate is presently reported to be a cold 0.6%.

Of course, the last time the pace of cumulative dividend cuts announced in a quarter was even close to the pace seen in 2015-Q1 was 2015-Q4. Falling just short of 2015-Q1 in terms of badness, the first estimate of real GDP growth in the fourth quarter of 2015 was reported to be a similarly cold 0.7%.

Leaving behind now what the simplest and perhaps one of the strongest near real-time indicators of real economic distress is telling us about the recent history of the U.S. economy, let's jump straight into the latest twists and turns in the quantum random walk of U.S. stock prices. 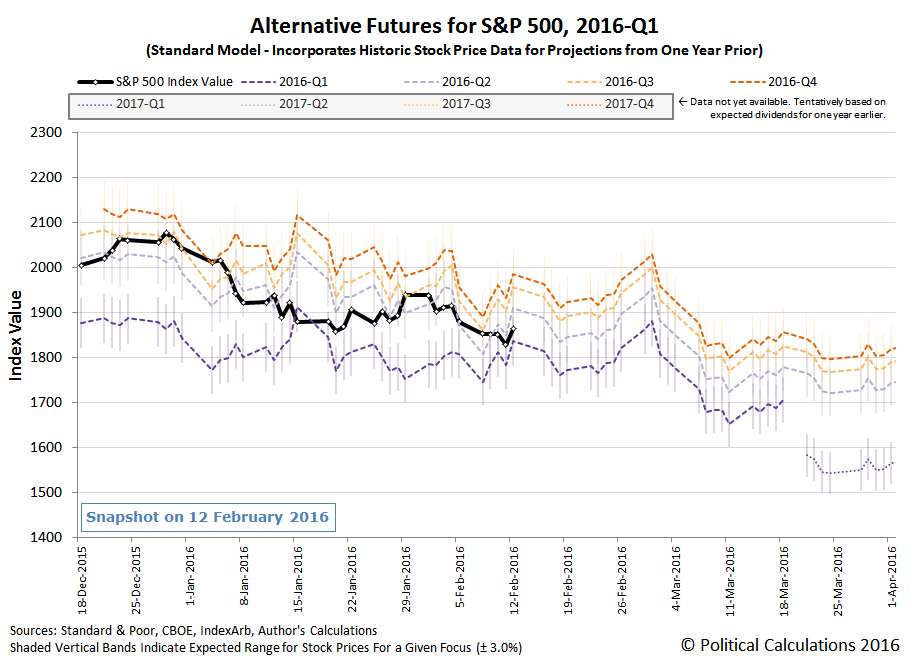 Here were the major market driving news events of the sixth week of 2016, or if you prefer, the second week of February 2016!

According to our model, which is giving us a truer read on the market now that we're beyond the short-term echo of past volatility that dogged us going into the last week, stock prices ended the sixth week of 2016 almost just as they began, with investors splitting their forward-looking attention between 2016-Q1 and 2016-Q2.

The good news though is that stock prices are likely to be less volatile over the next two weeks than they were in either January 2016 or in the first two weeks of February, at least in the absence of market driving news that might cause investors to suddenly shift their attention with little warning to more distant points of time in the future, which would be a good thing in the short term if that were to happen.

The bad news is that for that to happen, it would take some pretty bad news....