Political Calculations
Unexpectedly Intriguing!
February 1, 2016
Exploiting the Future for the S&P 500 in Week 4 of 2016

Would you be able to craft an investment strategy that would be able to take advantage of such foreknowledge?

We ask, because last week, we wrote the following:

In this next week, the Federal Reserve's Open Market Committee will command an outsized portion of the attention of investors on Wednesday, 27 January 2016. In addition, earnings season continues as a number of very large companies, especially in the distressed oil industry, will be announcing their earnings and addressing investors regarding their business outlook during the week.

With investors currently focused on 2016-Q2, should the Fed hold tight to its plans to hike short term interest rates again before the end of 2016-Q1 at the same time that U.S. firms announce that their outlooks are less bright than currently expected, it is highly likely that investors will once again shift their attention back to 2016-Q1, sending stock prices considerably lower.

On the other hand, should the Fed indicate it will adopt a more dovish stance combine with news that troubled U.S. firms see the potential for real improvement in their outlook by the end of the year, then we could see a fairly strong rally as investors shift their focus to more distant future quarters.

And if the combination of market driving news mixes elements of these two scenarios, then it's likely that the market will stabilize somewhat and largely move sideways within a relatively narrower range than the previous week during the week to come.

Back then, that was the future, as expressed in what might as well have been a sequence of "If-Then" statements from high school geometry. Now, here is how Week 4 of January 2016 actually played out. First, for 2016-Q1 to date: 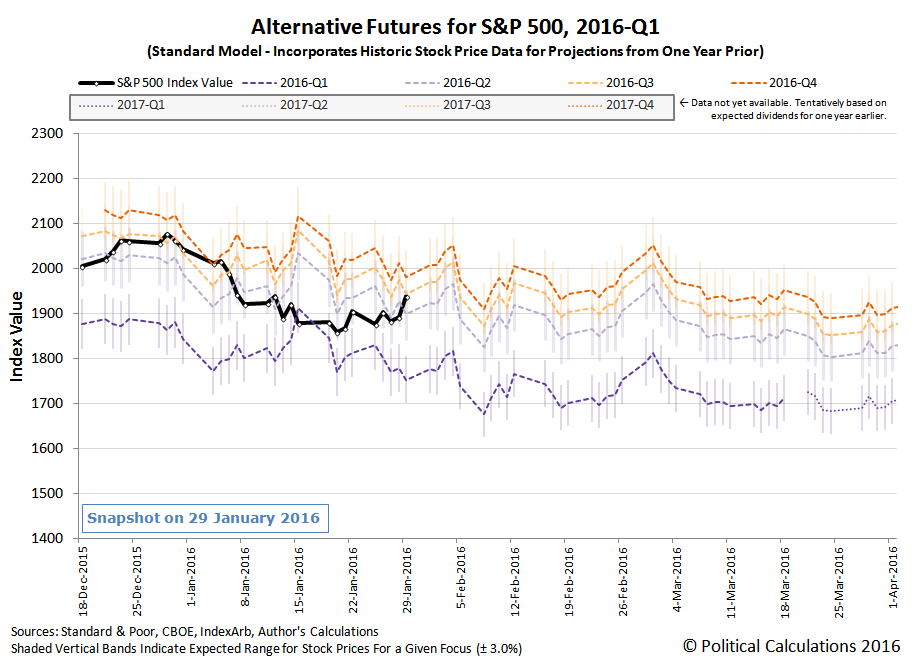 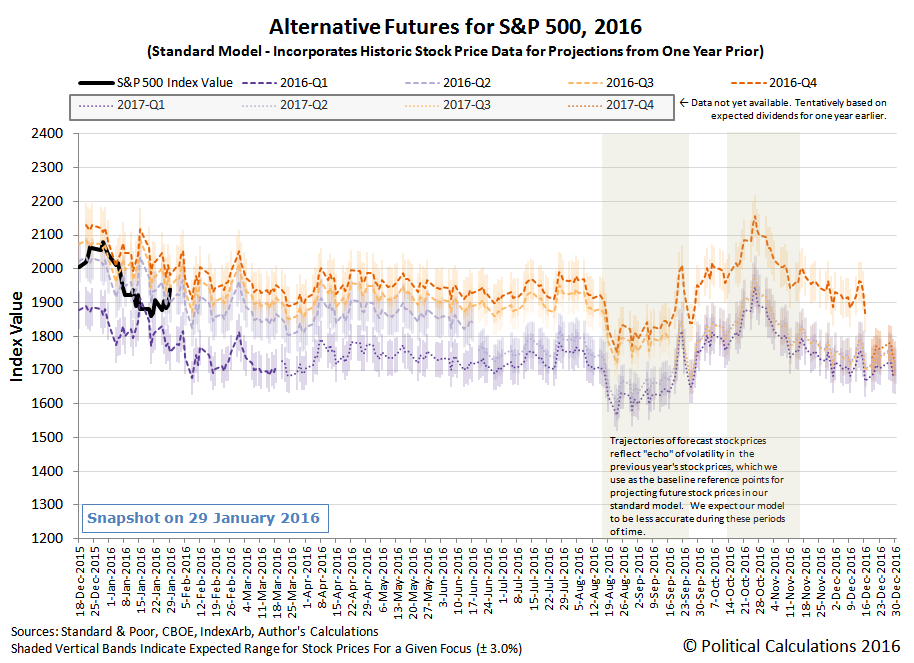 Here were the week's main events:

Before concluding with what we really want to get to in this post, let's take a closer look at the reported comments of San Francisco Federal Reserve Bank president John Williams from Friday, 29 January 2016 to understand why investors only shifted their focus to 2016-Q3 and not, as yet, to a more distant future quarter as they consider the likely timing of the Fed's next change in the level of U.S. short term interest rates:

At the time, officials at the Fed, the U.S. central bank, had as a group expected about four further rate hikes this year, and Williams had said that was in line with his own expectation.

That view appears to have changed, after investor worries about a global slowdown and weakness in China sent equities and oil prices plunging through most of January. Meanwhile the dollar has strengthened, pushing down on U.S. inflation, which is running well below the Fed's 2-percent target.

"We got a little stronger dollar, some mixed data on the economy, some weakness in (fourth-quarter U.S. GDP growth), all of those coming together kind of tell me that we probably need a little bit more monetary accommodation this year than I was thinking in the middle of December."

Getting back to what we really want to get at, do you see how all these changes in the value of the S&P 500 were specifically covered in our If-Then conditions representing how stock prices would be most likely to behave during the fourth week of 2016?

And since they were, the question of how you as an investor could have taken advantage of the foreknowledge of how stock prices would behave under the circumstances we described, but not the knowledge of the exact timing of when the changes in stock prices we described would take place, is a very open question. One where the strategies you might have used in the fourth week of January 2016 would be very similar to what you might do in future weeks when similar circumstances come back into play.

So what would you have done with your investments to maximize your returns given these circumstances (and the benefit of 20-20 hindsight)? If you're reading this article on Seeking Alpha, we'll monitor the responses addressing that question in the comments over the next week, and will share the more interesting strategies that are put forward through that venue in our next discussion of our alternative futures model for the S&P 500.