As promised, we've dug deeper in the U.S. Department of Labor's state level data on the number of seasonally-adjusted new jobless claims being filed each week to identify the states that have experienced a trend-breaking increase in the number of job layoffs.

Let's get straight to what we found: the job layoffs that began rising in the final week of October 2015 have been concentrated in states where either farming or the finance industry contributes an outsized portion of their economies, at least as compared to most other states.

The chart below shows the clear break in the previous statistical trend that occurred in the farm industry heavy states of South Dakota, Nebraska, Kansas, Iowa and Idaho, as well as the finance industry-domininated states of New York, New Jersey, Connecticut, Massachusetts, New Hampshire, Maryland, and to a lesser degree, Illinois, Minnesota and Colorado. 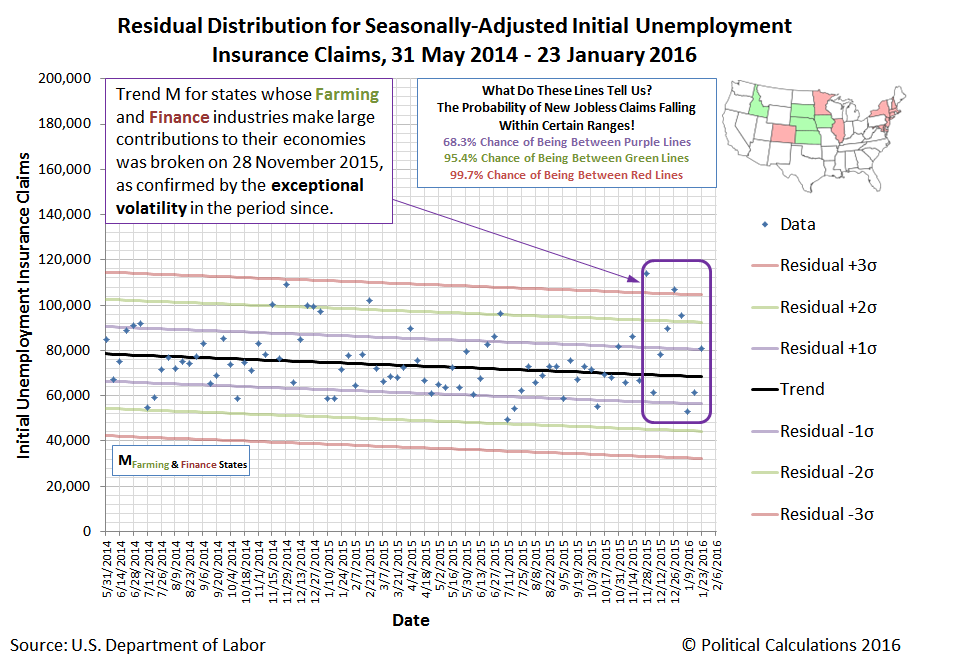 Some quick observations before we discuss what else we looked at before concentrating on these states....

Previously, we had looked at the oil-patch states and found that the number of job layoffs in these states was largely flat, which has remained true up at least through 23 January 2016, the most recent week for which we have state level data for initial unemployment insurance claim filings at this writing. What is happening in the farm and finance industry states represents an expansion of economic distress in the U.S.

We had also looked at California, the most populous U.S. state. Here, we found a break in the statistical trend that applied in that state beginning in January 2016, but which did not exist before that time, which happens to coincide with the latest increase in the state's minimum wage. Although California has a major agricultural industry, it contributes a much smaller share to the state's GDP than does the farming industries of the states we identified, not to mention the very different nature of agriculture in California as compared to the more farm industry heavy states. For example, California's farmers actually enjoyed a record year in 2015, despite the state's extreme drought, thanks mostly to the industry's front-of-the-line status for irrigated water delivery.

Having established an increased minimum wage as a potential explanation for the increase in layoffs beginning in January 2016, we looked at all the other U.S. states that implemented minimum wage hikes that were greater than the rate of inflation to find out if they experienced a similar pattern. We found no similar January surge in these other states.

We tentatively think that may have a lot to do with the composition of the recently added workers in California's economy, where we discovered from data published by California's Economic Development Department in its monthly Labor Market Review that teens were hired in 2015 at over five times the rate of their actual numbers in the state's overall workforce. That is to say then that much of California's net job growth in 2015 was very likely fueled by an explosion of minimum wage jobs. That's a topic we'll explore more in the near future, but for now, we'll note that we are not aware of any other state where teens, who represent the demographic group within the U.S. work force with the least amount of education, skills and job experience, outperformed adults in gaining employment to such an extreme extent as they appear to have in California in 2015.

We also looked at states whose economies are dominated by the retail or manufacturing industries. We observed no break in established trends for new jobless claims in these states, which covers all the major industrial sectors where contemporary news coverage from November 2015 to the present has indicated some degree of distress.