According to Standard and Poor, the 64 dividend cuts recorded in February 2016 makes it the worst February for dividend cuts since the 2009 Great Recession.

In fact, there are only five individual calendar months that have seen more companies act to decrease, slash, cut, diminish, discontinue, suspend or otherwise eliminate their cash dividend payments to investors who own shares of their stock since the S&P's records for the statistic begin in January 2004: the months in which the so-called Great Recession reached its bottom for the U.S. stock market in February, March and April 2009, and the Fiscal Cliff-tax policy change influenced months of December 2012 and March 2013. 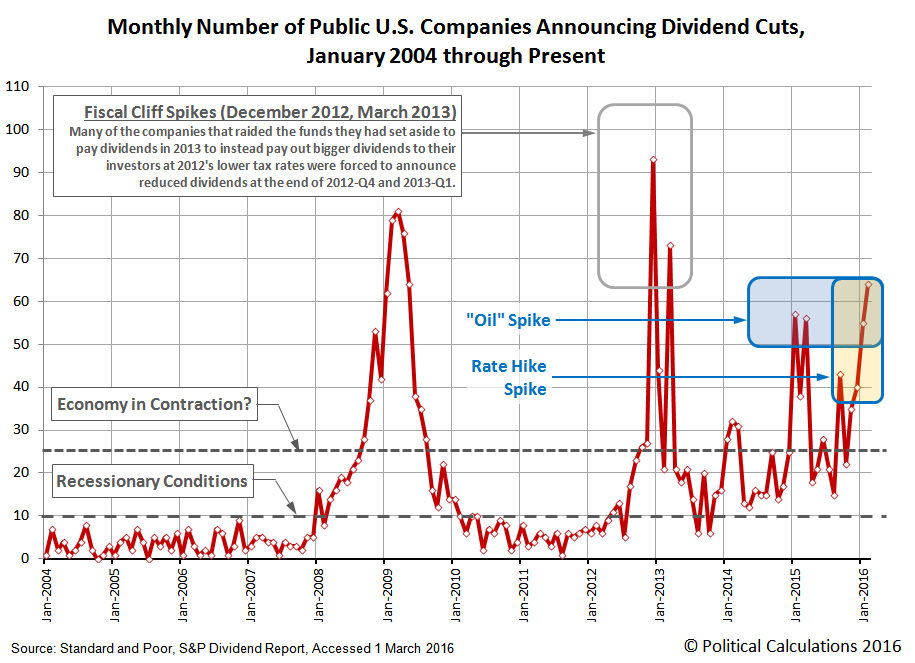 It has been a while since we last featured the following chart, in which we also show the number of U.S. firms acting to increase their dividend payments to their shareholders along with the those acting to cut them. 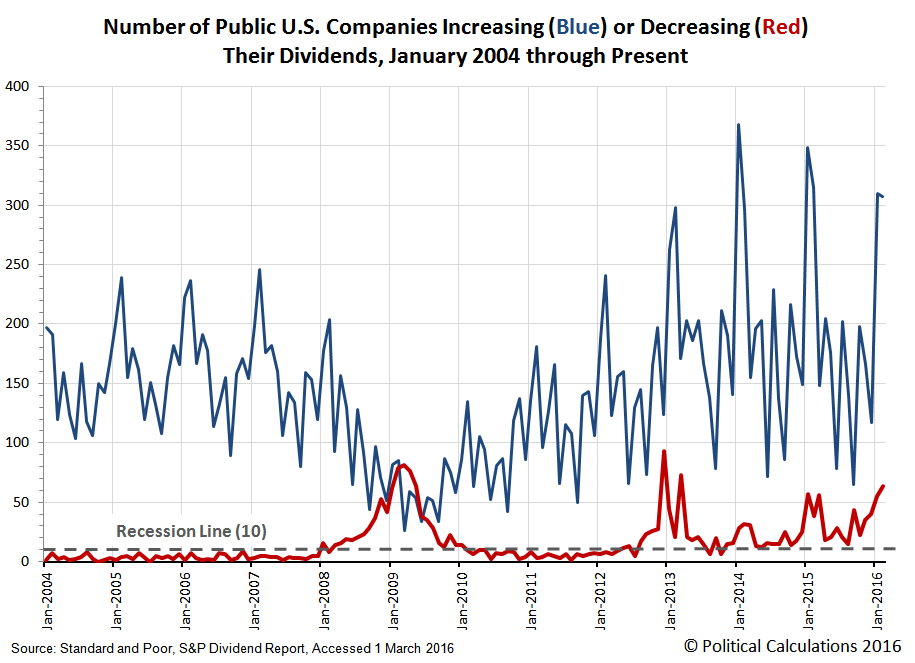 In this chart, we see something of the after effects of the changes in U.S. tax policies that were implmented with the Fiscal Cliff tax deal on 1 January 2013. Here, after the top income tax rate was hiked, many firms shifted to compensate their owners, managers and other key employees through dividends, even though the tax rate on dividend income was also increased. The reason that happened is because the changes in the tax law provided a relative advantage for dividend income over salary or wage-based income, allowing these influential shareholders to be able to take home more of the income they earn.

Meanwhile, the risk of there not being a tax deal is what prompted many firms to raid the reserve funds that they were setting aside to pay dividends throughout 2013, so that they would be paid out before the end of 2012 instead, before what would have been a massive tax hike would take effect in 2013. This is the event we refer to as the Great Dividend Raid of 2012, where we documented these actions happening in near real time. Companies that adopted on this strategy subsequently needed to announce dividend cuts, which they did in the final month of both 2012-Q4 and 2013-Q1, accounting for why the number of dividend cuts in these two months were so abnormally high.

At the same time, the size of the increases in dividends that have been taking place has also been shrinking over the same time frame, as noted in Barron's just two weeks ago.

The pace of increases has already slowed this year, and analysts expect that trend to continue. Through last Wednesday, the 70 S&P 500 companies that had raised their dividends in 2016 had done so by an average of 10.9%, versus 12.6% over the same time period in 2015 and 15.8% in 2014, according to Howard Silverblatt, senior analyst at S&P Dow Jones Indices.

What we observe in the second chart suggests that the U.S. economy is experiencing contractionary distress, though less severe than what was experienced during the Great Recession, making it more consistent with a regular recession at this point of time. Speaking of that distress, please click here for our analysis of our sample of 42 of the 64 dividend cut announcing companies from February 2016 to see where that distress is concentrated within the U.S. economy.