As we did last week, we'll begin by reminding you of what we said back in the first week of March 2016 before you look at our updated chart showing the actual trajectory of the S&P 500 against the alternative trajectories of what our futures-based model forecast:

It looks like we're going to skate the upper edge of our impromptu prediction this week, and its quite possible that the S&P 500 will poke above that range before the end of the month. 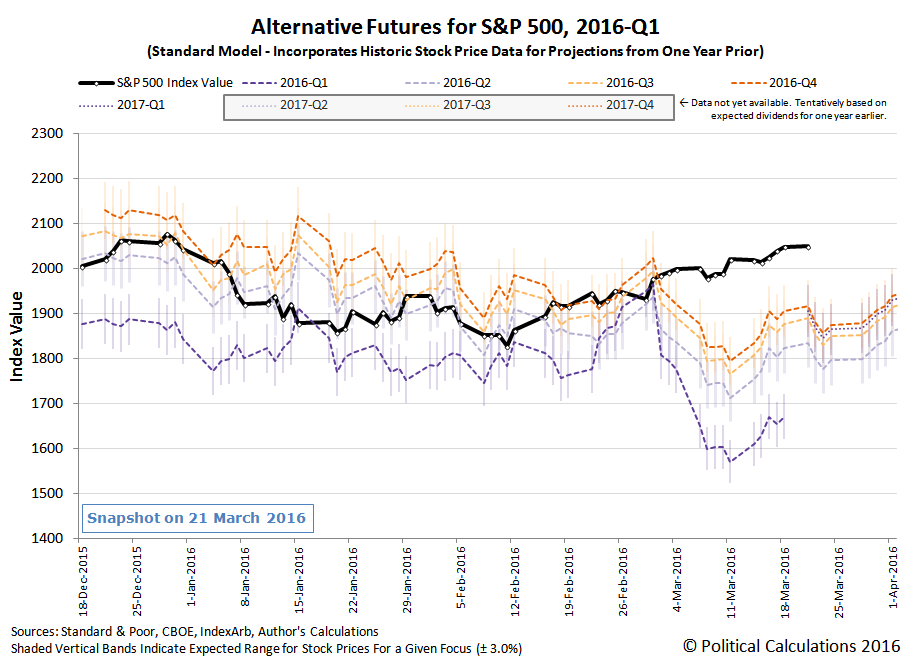 The big change in this chart from the previous version is that it now reflects the expected dividends that will be paid in 2017-Q1, which the implied forward dividend futures (CBOE: DVMR) for that distant quarter have initially pegged at 11.95 per share.

In terms of the acceleration of dividends, that future quarter is approximately on par with 2016-Q4.

As a result, the potential volatility of stock prices through the upcoming quarter will be much less than what took place during the first half of 2016-Q1, since the spread between the alternative future trajectories of the S&P 500 is narrower.

Because we're nearing the end of the quarter, let's look past it to see what lies ahead: 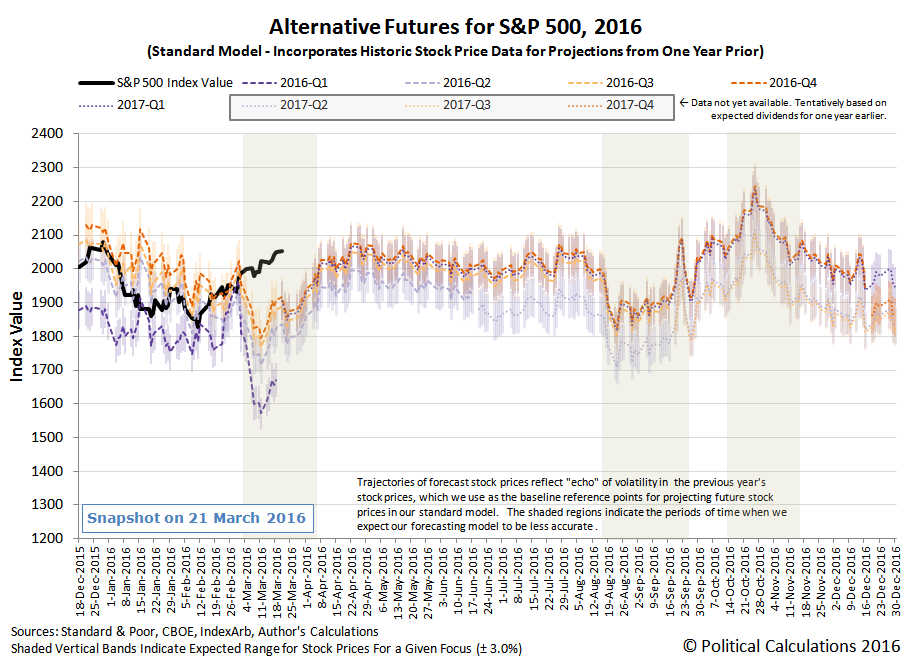 We anticipate that the echo of past volatility affecting the unadjusted accuracy of our model will subside in the second week of April 2016. In the meantime, if you connect the dots for the trajectory for 2016-Q4 on both sides of the echo, and factor in the typical daily volatility range of plus or minus 3%, you pretty much have what our model would forecast for the S&P 500 in the absence of the echo event.

It occurs to us that if investors were to suddenly focus on 2016-Q2, now the worst of the alternative trajectories for the future of stock prices, the S&P 500 could drop by 200 points on very short notice. Which is something could happen if Fed officials were to regain enough credibility to have the possibility of a rate hike in 2016-Q2 taken seriously. (Despite their comments from Monday, 21 March 2016, they're not there yet....)

Because all the other trajectories are more positive than that one, one trading strategy that an investor might consider to take advantage of such a situation, without playing around with options or shorting the market, would be to place a limit order to buy long near that level, and then sell when investors shift their attention to a more distant future quarter.

That would assume little risk from changes in expectations for future dividends or a noise event that would send stock prices on a different trajectory, so paying attention to what stock prices are doing with respect to their alternative future trajectories would be required.