With so many high magnitude earthquakes having taken place during the last week in both Japan and Ecuador, we were curious to track down data that quantifies how frequently such damaging earthquakes occur over a long period of time.

We were surprised however to find that most earthquake data that fits that description only extends back to 1900 The chart below shows data from 1900 through 2001.

And the pattern largely continues to the present, as the U.S. Geological Survey's chart of Magnitude 5 or greater earthquakes from 1990 through September 2013 confirms.

It seems then that we are limited to data that only exists in recent history, coinciding with the invention and deployment of the modern seismograph, which suggests that while the number of large magnitude earthquakes is highly variable from year to year, perhaps as they have occurred in clusters, there is no clear trend to suggest whether they have either increased or decreased in frequency on the whole since 1900.

But that's only since 1900. We cannot tell if they were either more frequent or less frequent in the past because the available data doesn't extend back that farther than that year.

It then occurred to us that the Japanese and Ecuadorean earthquakes occurred along faults associated with the Ring of Fire, which marks the boundary of the major tectonic plates that lie beneath the Pacific Ocean and the continents that border the ocean.

They call it the Ring of Fire for a reason, and that reason is volcanoes. Since volcanic eruptions are often associated with earthquakes[1], and because erupting volcanoes would be easier for people without modern scientific equipment to quantify, we might get a better sense of the changing frequency of geologic events over a much longer period of time by tapping into that stream of data.

So we did. Specifically, we tapped into the Smithsonian Institute's Global Volcanism Program's Volcanoes of the World database, which offers data going back thousands of years, where we specifically focused on the number of new volcanic eruptions recorded each year.

The chart below reveals what we found when we considered the period from 0 AD through 2015 AD (or 0 CE through 2015 CE, if you prefer): 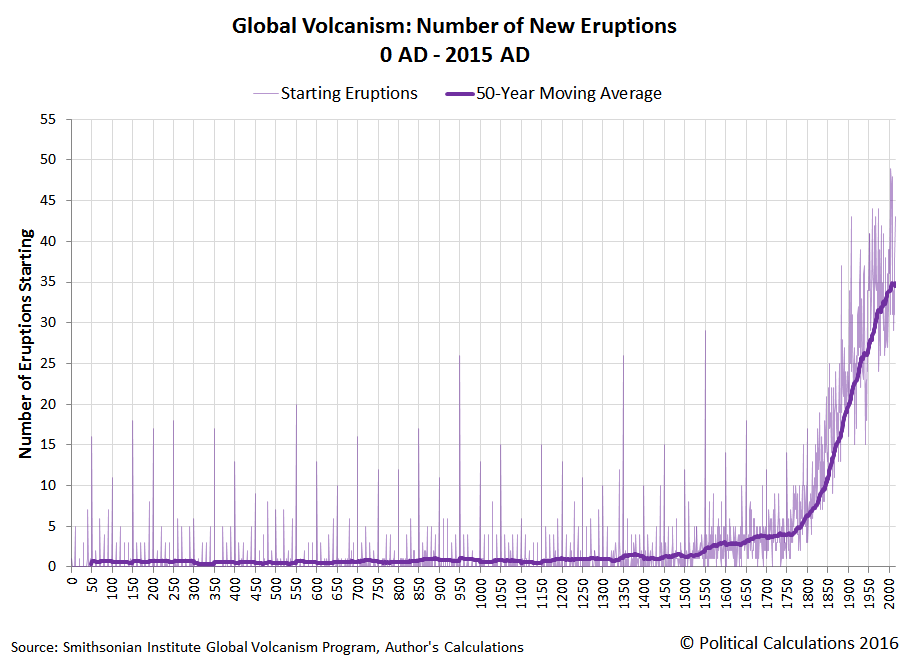 We have to say that after having seen the large magnitude earthquake frequency data, which shows no trend over time, we weren't expecting to see a proverbial hockey stock chart.

Which begs a question - how come the people who get so worked up over historical temperature charts that show a hockey stick warming of just 1.5-2.0 degrees Fahrenheit in recent centuries aren't absolutely apoplectic over this apparent catastrophic trend?

There is a simple answer that can explain what we observe in the chart above. Most of the history for volcanic eruptions was recorded by Europeans, who didn't frequently travel to the regions of the world where volcanic eruptions most frequently occur until the 1500s, which is why we see the number tick upward after the discovery of the Americas and the voyages of exploration.

The number then grows exponentially as the development of modern science takes off in the late 1700s and 1800s, when advances in trade and transportation combined to lead more people to be in places where they might observe, document and communicate information about new eruptions to others.

Now add in technological innovations, such as the seismograph again from the late 1800s or Earth-observing satellites from the last 50 years, which allow scientists to detect volcanic eruptions from afar, and we find that what has really increased dramatically in recent centuries is our ability to detect erupting volcanoes.

Like large magnitude earthquakes from the 20th century to the present, there is likely no meaningful trend for the observed frequency of volcanic eruptions over centuries - just as there has not been for volcanic eruptions in recent decades. But our improving ability to detect them combined with our discipline for documenting what we observe means that it is our own activities, and specifically these activities, that are behind their apparent increase over time.

Where the frequency of volcanic eruptions is concerned, the bottom line is that the principle of uniformitarianism applies.