Political Calculations
Unexpectedly Intriguing!
May 5, 2016
The 2016 Crash of U.S. Imports from China

If you were paying attention to the news yesterday, you probably heard that the United States' trade deficit with the rest of the world hit was the smallest it has been in several years. Which is being presented as a positive for the U.S. economy. Here is an excerpt of some key numbers from the news:

The U.S. trade deficit fell more than expected in March as imports of goods tumbled to their lowest level since 2010, a potential boost to first-quarter economic growth estimates that also hints at sluggish domestic demand.

In March, imports were held down by industrial supplies and materials imports which hit their lowest level since April 2004. Petroleum imports were the lowest since September 2002, even as oil prices rose to an average $27.68 per barrel.

Imports from China fell to their lowest level in three years. With exports rising, the politically sensitive U.S.-China trade deficit declined 25.7 percent to $20.9 billion in March.

But there is more to that story, and actually where the relative health of the U.S. economy is concerned, some, well, cause for concern. The following chart shows what we find when we calculate the year-over-year change in the growth rate of the exchange rate adjusted value of goods between the U.S. and China, which is important because it gives an indication of the relative health of the two largest economies in the world. 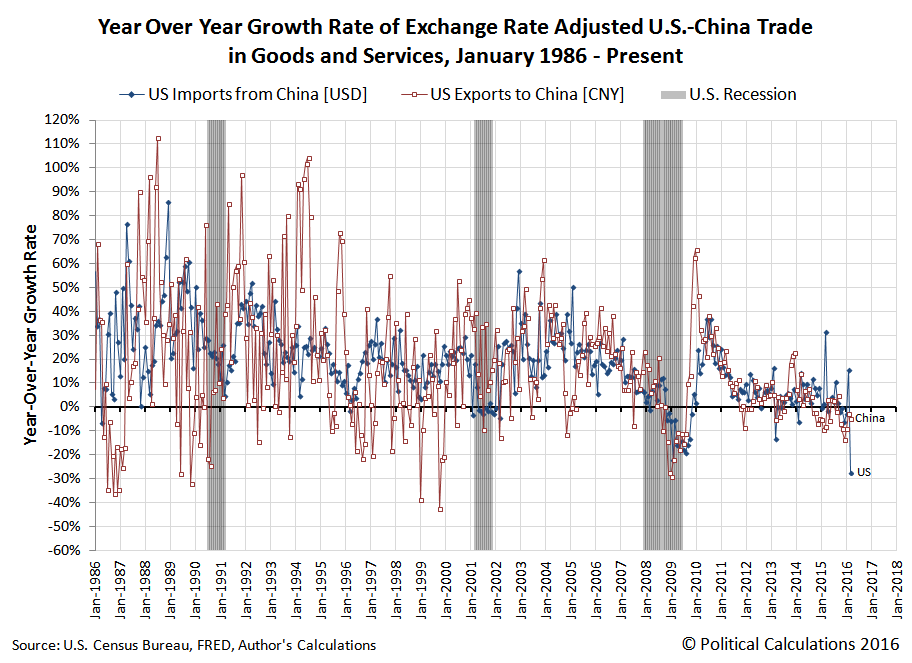 While China's economy has been in this territory for some time, which coincides with that economy's struggles, what's more remarkable is the deep plunge that the U.S. economy would appear to have taken from the values recorded a year ago.

That's somewhat misleading, because a year ago, the amount of goods coming into the U.S. from China was elevated due to the end of a work slowdown by organized labor at the U.S.' west coast ports, which had created a significant backlog that took time to clear after it ended in February 2015. Last month, that work slowdown meant an elevated year over year growth rate, but in March 2016, that means a dramatic plunge in the year over year growth rate.

So how can we get a sense of the relative health of the U.S. economy from the most recently reported trade data when that dynamic is at work?

It occurred to us that we can take advantage of the cyclical nature of China's exports to the United States, which typically peak in either September or October of each year, and bottom in either February or March. We've shown that for the value of goods that the U.S. imports from China in the chart below for the period from January 2000 through March 2016, where we're showing the value of the goods in terms of both U.S. dollars (which is how Americans see the value of what it imports from China) and Chinese yuan (which is how the Chinese see the value of what it exports to the U.S.) 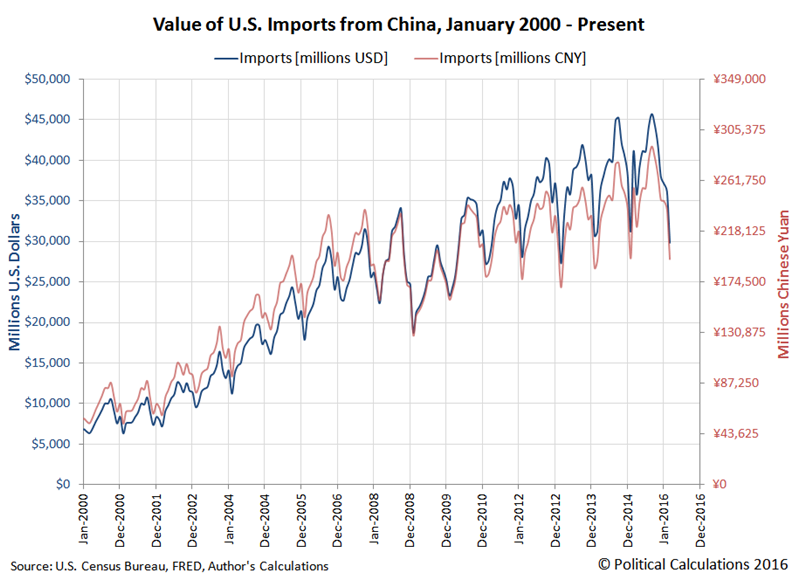 What if we calculated the percentage change from one year's bottom in the value of the goods that the U.S. imports from China to the next? Doing that should give us a pretty good idea of whether the value of trade is up, indicating positive economic growth since a growing economy will draw in more goods from elsewhere in the world to meet its growing demand, or if its down, indicating recessionary conditions are present in the U.S. economy. The following chart reveals what we found: 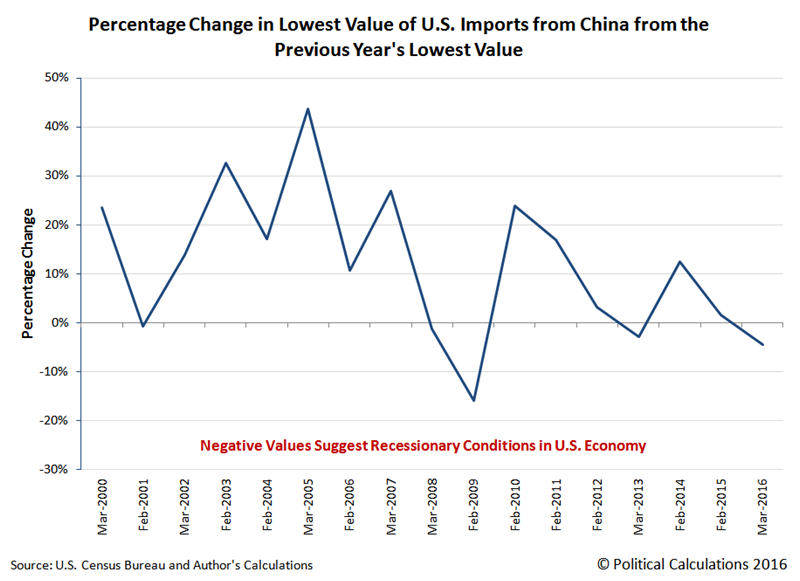 We see that negative values are consistent with recessionary conditions being present in the U.S. economy, coinciding with the 2001 recession, the 2008-2009 recession, and the 2012-2013 microrecession.

We also see that 2016 shows a negative value. Which is really remarkable because that's in comparison to the lowest month for U.S. imports from China in 2015, which was made lower in part because of the labor union orchestrated work slowdown at west coast ports that year.

Which then confirms that the relative health of the U.S. economy in March 2016 has deteriorated from what it was a year ago, and is also worse than what was observed during the 2012-2013 microrecession.