Last year, humans on the planet Earth would appear to have set a new world record for fossil fuel consumption.

Each year in June two very important reports are released that provide a comprehensive view of the global energy markets. The highlight of the recently released Renewables 2016 Global Status Report was that the world’s renewable energy production has never been higher. But the biggest takeaway from this year’s BP Statistical Review, released Wednesday, may be that the world’s fossil fuel consumption has also never been higher.

How much of that year-over-year increase in the equivalent amount of petroleum consumed, representing the planet's increase in total fossil fuel consumption by humans, do you suppose could have ended up in the Earth's atmosphere?

Doing the math, we know that for every 1 kilogram of petroleum that is burned, approximately 3.15 kilograms of carbon dioxide is generated. [We say "approximately" because this figure assumes 100% complete combustion.]

Therefore, if we assume that all 127 million additional equivalent metric tonnes of petroleum consumed in 2015 were fully combusted, it would generate a little over 400 million metric tonnes of carbon dioxide, which marks the maximum amount of additional CO2 that could have been emitted into the air above the level produced by all fossil fuel consumption through human activities in 2014.

That's 0.4 billion metric tonnes, which is the number we need to plug into our tool for calculating the atmospheric concentration of CO2 given the number of billions of metric tonnes of carbon dioxide emissions. If you're reading this article on a site that republishes our RSS news feed, please click here to access a working version of the tool.

Compared to 2014, the concentration of carbon dioxide in the Earth's atmosphere has been increased by a maximum of 0.051 parts per million, given the incremental increase in human fossil fuel consumption by people during 2015.

By comparison, the 2015 Indonesia wildfire had well over four times the impact, increasing atmospheric CO2 by at least 0.224 parts per million.

And if we consider the 1997 Indonesia wildfires, which increased the concentration of atmospheric carbon dioxided by approximately 0.54 parts per million in 1997 and 1998, that event had nearly 10 times the impact.

Please keep these values and dates in mind when considering the following chart, which shows the trailing 12 month average of the year-over-year change in the amount of atmospheric carbon dioxide in the Earth's atmosphere. 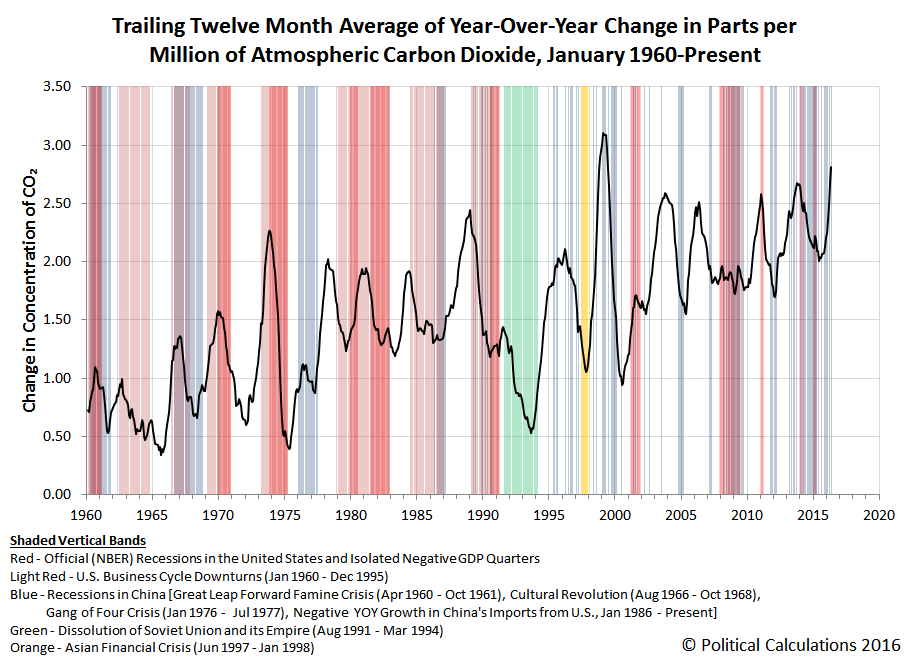 Looking over the atmospheric CO2 data, we expect the current upswing in the rate at which the level of carbon dioxide in the Earth's atmosphere is changing to continue in the near term, as the data likely doesn't yet reflect the impact of the Fort McMurray wildfire.