Political Calculations
Unexpectedly Intriguing!
June 22, 2016
How U.S. GDP Will "Most Likely" Be Revised in July 2016

How much will U.S. GDP most likely be revised when the U.S. Bureau of Economic Analysis publishes its annual revision to the nation's real GDP on 29 July 2016?

We started working on that question last Thursday, the day after the BEA released its revision of GDP data for the individual 50 states and the District of Columbia, when we identified the "maximum potential" size of the revision to be a -2.0% decline from its value that was recorded at the end of 2015.

We updated that post two days later to take into account the contribution to national GDP from the U.S. government's overseas military and civilian activities, which add to the GDP contributed by the 50 states and the nation's capital to be equal to what the BEA should report for the nation's entire GDP. (Although we did that work last Friday, we only just featured that contribution to national GDP in the period from 2005-Q1 through 2015-Q3 yesterday.)

We then used that information along with the BEA's just-revised data for the individual 50 states plus DC to determine the "maximum likely" size of the upcoming revision to the nation's real GDP. The chart below reveals what we found. 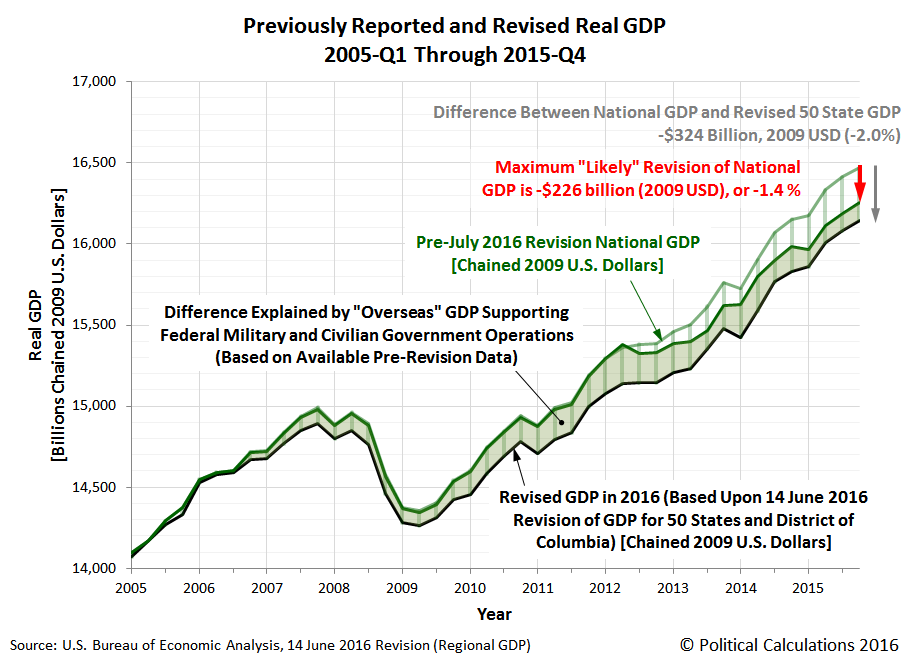 But the "maximum likely" revision of -1.4% of previously reported GDP through 2015-Q4 is not the "most likely" size of the upcoming revision to the nation's GDP will be, because the BEA's plans for the revision of the national level GDP data will only cover the period from 2013-Q1 through 2016-Q1.

That means that it will miss the discrepancy that opens up in 2012-Q3 and 2012-Q4 between the just-revised state level GDP and previously indicated overseas federal GDP and its previously recorded national level GDP. That discrepancy is just over $55.1 billion in terms of constant 2009 U.S. dollars in 2012-Q4, which itself is over 24% of the full $225.7 billion discrepancy that our previous calculations indicates between the pre-revised national level real GDP and the post-revised state level GDP data through 2015-Q3.

Because the BEA won't be including that $55.1 billion portion of the discrepancy from 2012, the "most likely" size of the revision that it will report at the end of July 2016 is therefore -1.1%, which is 24% less than the "maximum likely" revision of -1.4% we previously calculated.

Our "most likely" estimate assumes however that the BEA's estimates of the contribution to national GDP from the U.S. government's overseas military and civilian activities will not greatly change from what it has previously indicated. Should the BEA revise its estimates of this component of nation real GDP, the actual size of the BEA's upcoming revision to the national GDP will entirely depend upon how that single factor might change.

In the case that it turns out that more GDP than previously indicated was generated through supporting the U.S. government's various overseas activities, the actual magnitude of the revision will be smaller than what we've now indicated the "most likely" size of the revision to be, and vice versa for the opposite scenario.

So if you want to place your bets on the over or under, all you need to do is to take your best guess as to just how much more or less of the nation's real GDP has been generated through supporting the U.S. government's activities overseas than what the BEA has previously indicated. To make it interesting, we've set up an online survey where you can put in your two cents and also find out what the consensus is for all those who have answered that single question!

Update 27 July 2016: This is so cool! We had an extended contact today with an analyst who works for the BEA, who wanted to know more about how we came up with our estimate of how real GDP would change using the BEA's recently revised regional account data.

That was fantastic timing, because we just happened to have our spreadsheet open because we were updating it with state level GDP data from 2016-Q1 that was just released today.

In going over that material, we discovered a problem that threw off our calculations, with the effect that the results we had obtained weren't matching what they were getting from 2014-Q3 onward in replicating our analysis. We were able to trace the problem back to the GDP deflator that we used to convert nominal GDP data to inflation-adjusted "real" data, where we were multiplying the nominal data by the GDP deflator data for the national level data (the data whose revision is set to be published on Friday, 29 July 2016) instead of the GDP deflator data that applies for the aggregate 50 states plus Washington DC, which just happened to be in the spreadsheet column next to it.

After we made the appropriate correction, all our results from 2014-Q3 onward snapped into place and all results matched, from the period from 2005-Q1 through 2014-Q2, where there was never any problem, and now from 2014-Q3 through 2015-Q4! The following chart shows the latest and greatest for what we expect from Friday's GDP revision based only on the state level GDP revision from June! 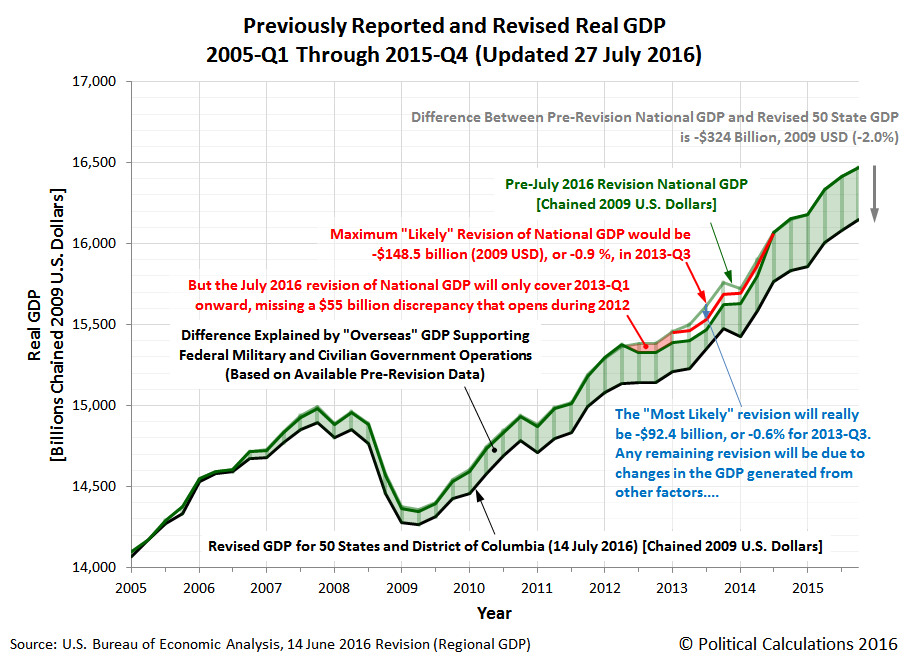 As for the outcome of the analysis, the error we made with using the incorrect GDP deflator overstated the amount by which real GDP is likely to be revised by 0.5% of GDP, so instead of the maximum likely change of -1.4% that we had previously calculated, the maximum amount by which national GDP might change as a result of the revisions the BEA has made to its GDP data for the 50 states plus Washington DC is -0.9%, with the maximum discrepancy now taking place in 2013-Q3. This data is indicated in the chart above by the dark-green line.

But since the BEA's national revision will cover the period from 2013-Q1 to the present, the revision of the national level GDP will not include the now-confirmed $55 billion discrepancy that opens up between the national GDP data and the national aggregate state level GDP in 2012. We are therefore now estimating that the most likely revision that will be made to the national GDP data on Friday, 29 July 2016 will be an adjustment of -0.6% in 2013-Q3. This data is indicated in the chart above by the bright red line (and the blue arrow at 2013-Q3).

We'd like to thank everyone who provided their useful assistance in getting to this point - in terms of collaborative effort, this has been one of the biggest projects we've had the pleasure of working on since launching Political Calculations. It's always exciting when we get to break brand new ground and do analysis that was never possible before, and we appreciate your shared enthusiasm!

On a final note, if you happened to have come across this post by way of Econbrowser, you might want to pass along information back to the author who pointed you in this direction that their observations have been described as "not relevant". We're pretty sure that particular author hears that a lot....

There's more that we'd like to be able to discuss on the topic of the upcoming national-level GDP revision, but that will have to wait until after that data is released. Until then, what you see above represents the most that anyone can reasonably glean about what the revision will look like based only on data that is already available to the public. 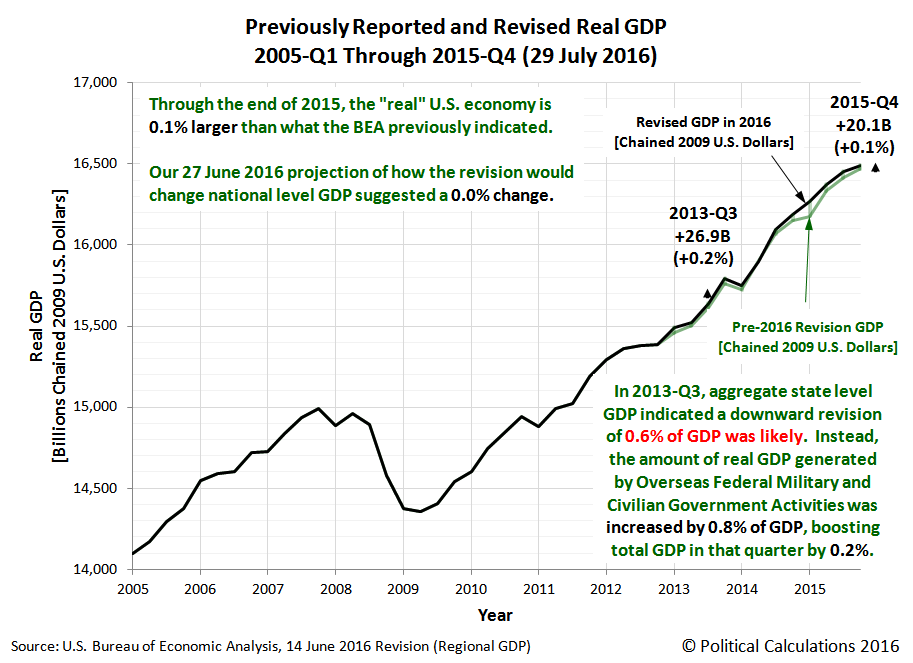 Compared to our final pre-revision prediction from 27 July 2016, we were off by 0.1% of GDP through 2015-Q4, where we had previously projected no change.

More significantly however, national-level real GDP was increased by 0.2% of its previously reported figure in 2013-Q3, where the aggregate GDP data for the 50 states and the District of Columbia had instead indicated that a 0.6% of GDP decline for that quarter was most likely. That means that the amount of GDP that the U.S. generated in that quarter from Overseas Federal Military and Civilian Government Activities was revised to be significantly much higher than the BEA had previously indicated, in effect, adding an additional 0.8% of GDP on top of what the BEA now indicates was generated within the actual territory of the United States.

We'll dig deeper into the national-level GDP revision periodically over the next several weeks!