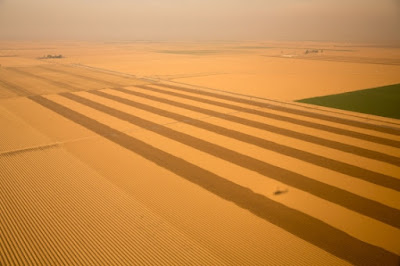 How much can climate change impact the economy?

No matter who you are or what your thoughts are about the topic of climate change, whether very well reasoned or not, this is a real question that real people need to be able to answer because the economy is where it will have a real impact on their lives.

But how can you measure the economic impact of climate change?

It occurred to us that one way we might do it is to consider the impact that a climate change event actually had on the modern economy, and more specifically, on the part of the economy that is most sensitive to climate change: agriculture.

That changes in the climate have an effect on agriculture is something that has been well established by real world observations over the last several thousand years and was even recently reaffirmed for the modern era by academic research.

For our purposes, we wanted to consider the economic impact of a climate changing event that had a prolonged effect - something more than a singular meteorological disaster that lasted for much longer than a single season or year, but also something that overwhelmed the abilities of modern farmers using the most advance agricultural technology available today to compensate.

The climate changing event we chose to consider is the 2010-2016 drought in the state of Kansas, which only just officially ended in all of the state's counties last month. At its peak in 2012, the severity of the drought has been described as the second driest on record since 1895, and was the longest sustained drought in the state since the 1950s.

The Palmer Drought Severity Index (PDSI) gives a sense of the severity of natural precipitation conditions for the state. Designed to give a reading of 0 for "normal" conditions, the PDSI oscillates between a minimum value of -6, indicating exceptional drought, to a maximum value of +6, indicating exceptional amounts of precipitation. The chart below shows the statewide average Palmer Drought Severity Index value for Kansas from January 2005 through March 2016. 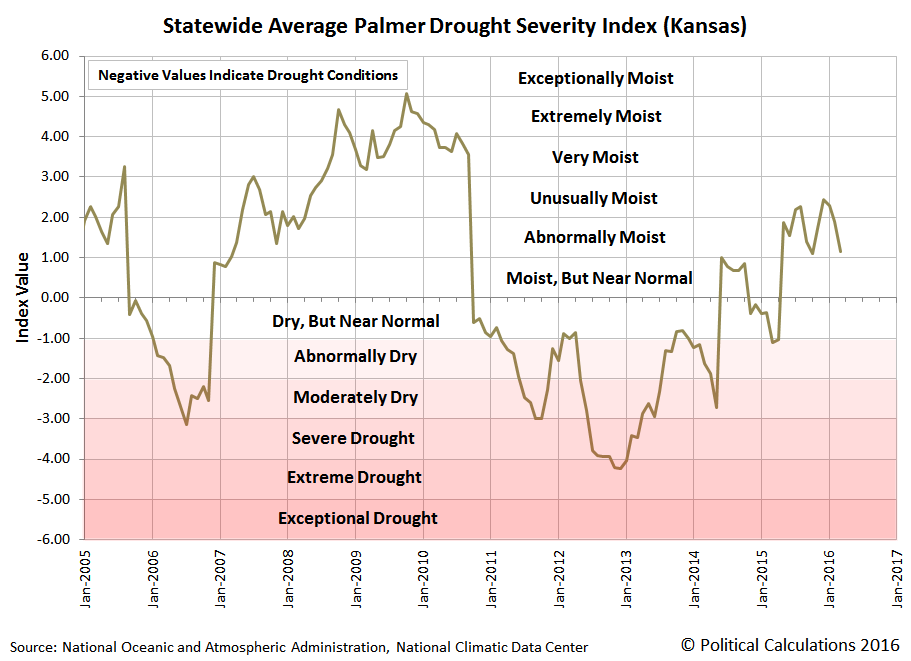 As you can see, when climate change in the form of drought came to Kansas, it came quickly, swinging the statewide average natural precipitation levels from exceptionally moist to severe drought during the fourth quarter of 2010.

And then, in 2012, it got even worse. Across the state, extreme drought conditions took hold, where a number of counties in the state fell even further into the exceptional drought category before recovering to just be in severe drought in 2013. Going by the statewide average PDSI, Kansas didn't climb out of drought until mid-2014, well over three years from the drought's onset. It then took nearly another two years for all of the counties in the state to finally escape drought conditions.

In our next chart, we've simply overlaid the contribution of the state's agricultural economic sector to its inflation-adjusted, or "real", Gross Domestic Product for the period spanning from March 2005 through September 2015, which is all the state-level data the U.S. Bureau of Economic Analysis had available back on 2 March 2016 when we pulled the data. While the BEA gives the data that applies for the end each calendar quarter, we used linear interpolation to approximate the GDP values for each month in between. 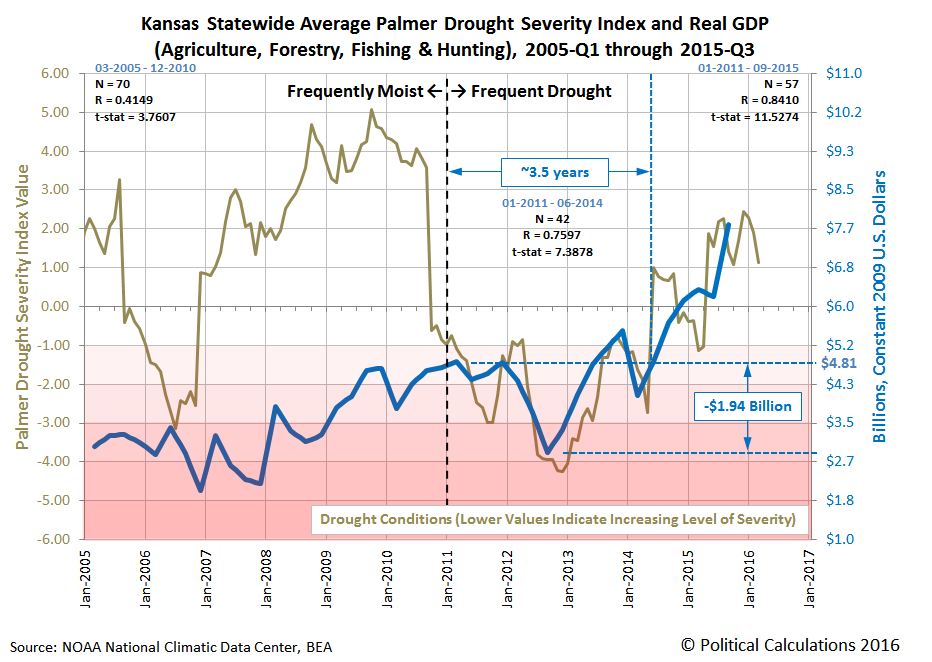 Update 16 June 2016: We've added detail and made minor corrections to the information shown in the image above. Click here to see the original. Update 10 September 2016: The updated version of the chart indicates correlation values for the raw real GDP and PDSI data. After detrending the data, for the period from March 2005 through December 2010, the R value is -0.03 (t-value = -.25), for the period from January 2011 through September 2014, the detrended R value is 0.75 (t-value = 8.39) and for the period of most severe drought from January 2011 through June 2014, the results are unchanged. These results fully affirm and validate the observations and analysis presented in this post.

Here, we observe that in the period preceding the onset of the 2010-2016 drought in Kansas, there is only a weak correlation between the state's real agricultural GDP output and the Palmer Drought Severity Index. But after drought conditions set in, from January 2011 onward, the correlation becomes exceptionally obvious and strong - to claim otherwise would require one to literally be a climate change denier.

From an economic perspective, that tells us that outside of sustained or especially severe periods of drought, natural precipitation is just one of many factors that can influence agricultural economic output, which is why the correlation between agricultural output and precipitation conditions is relatively weak. However, as the drought in Kansas intensified, it became a dominant factor affecting agricultural output beginning in 2011, especially as its severity soon strained the ability of the state's farmers to compensate for it with the technology and systems they had in place.

At its worst in 2012, the extreme drought conditions deprived the state of at least $1.94 billion in its GDP for that year, in the real terms of constant 2009 U.S. dollars as measured from the peak of Kansas' agricultural contribution to the state's GDP. In reality, it was far worse than that, as the U.S. Department of Agriculture (USDA) estimates the drought's damage to crops grown within the state to total $3 billion, or about $2.8 billion in constant 2009 U.S. dollars.

Extending nearly three and half years, the most severe portion of the state's drought from October 2010 through June 2014 ensured that the state's large agricultural sector would not see any sustained growth above its March 2011 contribution to GDP until after June 2014, when significant rainfall finally began to return to the state. Update 16 June 2016: Newly revised GDP data for the state indicates that there was a much longer lasting impact that resulted from the climate change shock of prolonged severe-to-exceptional drought. We'll revisit this analysis soon!

If you think about it though, while the worse of Kansas' 2010-2016 drought had a large and clear impact on the state's agricultural output, and by obvious extension, its economy, the thing that really caused farmers the most problems in the years since the fourth quarter of 2010 when the drought arrived in force was that they didn't expect it. They didn't expect it to either become as severe as it became or to last for as long as it lasted.

That's really where the real economic impact from climate change is to be found. If people expect it, they can plan for it, and are therefore better able to cope with the consequences.

In real life, it is the stuff you didn't expect or prepare for that hurts the most.