Political Calculations
Unexpectedly Intriguing!
21 September 2016
The Shrinking U.S. Stock Market
Unofficially speaking, as measured by the number of domestic firms listed on U.S. stock exchanges, the U.S. stock market has shrunk to the lowest level on record in data that extends back to 1975. 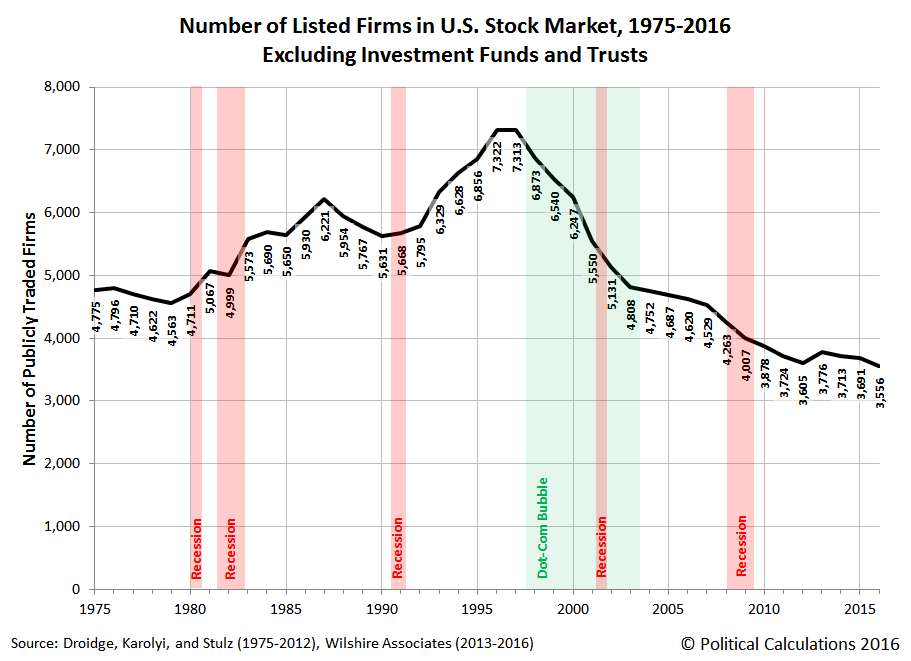 In the chart above, we've overlaid the timing of the official periods of recession for the U.S. economy and also the entire span of the Dot-Com Stock Market Bubble, both of which are things that you would think would affect the number of publicly-traded firms in the U.S., but which turn out to not be so important.

Recessions, for example, are things that you would think would coincide with falling numbers of firms in the U.S. stock market, but for the five recessions shown in the chart, three occur when the number of listed firms was rising, while the other two just happen to fall in the middle of longer term declines in the number of publicly-traded companies in the U.S.

Meanwhile, you might reasonably think that the inflation phase of the Dot Com Bubble from April 1997 through August 2000 would coincide with a rising number of U.S. firms listed on U.S. stock exchanges, but instead we see that the number of listed firms peaked more than a year before the Dot Com Bubble even began to seriously inflate, where the number of public firms in the U.S. has typically fallen in each year since its peak in 1995-1996.

More remarkably, the rate at which U.S. firms delisted between the end of 1996 through 2003 was steady, spanning both the inflation and deflation phases of the Dot Com Bubble. It's only after 2003 that the rate slowed, before falling more rapidly again in the period from 2008 through 2012.

After 2012, we have a break in the data series we used to construct the chart, which may account for the apparent increase in listed firms from 2012 to 2013. However, perhaps the more important takeaway is that the decline in the number of listed U.S. firms has continued from 2013 through the present, where it has now reached the lowest level on record for all the years for which we have this kind of data.