When junk science goes unchallenged, it can have real world consequences.

In today's example of junk science, we have a case where the real world consequences involve taxes being selectively imposed on a single class of products that is commonly purchased by millions of consumers, soda pop, because of the perceived harm to people's health that is believed to result from the excessive consumption of a single one of its ingredients, sugar.

What makes this an example of junk science is the combination of ideological and cultural goals of the proponents of the city's soda tax and the inconsistencies associated with their proposed solution to deal with it, in which they are ignoring thousands of other foods and beverage products that also contain similar levels of sugar in its various forms (sucrose, fructose, et cetera), which will not also be subjected to the tax aimed at solving a perceived public health issue. The table below lists the specific items from our checklist for how to detect junk science that apply to today's example.

As part of the discussion related to today's example of junk science, you'll also see the phrase "Pigovian tax". These are named after British economist A.C. Pigou, who proposed that imposing taxes on things or activities that produce undesirable consequences would lead to less of the undesirable consequences, assuming that lawmakers set that kind of tax to the correct level to compensate for the cost of the negative consequences and impose it everywhere it needs to be imposed to achieve the intended result.

Otherwise, what you will get will closely resemble today's example of junk science, where one city's lawmakers are making a total hash out of nutrition science, public health, and tax policies.

Busybodies in the American public, never content to leave other people alone, always seem to need a common enemy to rally against. For years, it was McDonald's. Then it was Monsanto and Big Pharma. Now, it's Big Soda.

At first glance, a war on soda might appear to make sense. There is no nutritional benefit to soda. Given the large and growing segment of the U.S. populace that is obese or contracting type 2 diabetes, perhaps a Pigovian tax on soda (with the aim of reducing soda consumption) makes sense. After all, the science on sugar is pretty clear: Too much of it in your diet can lead to health problems.

But a closer look at food science reveals that a tax on sugary drinks (such as soda, sports drinks, and tea), a policy being pondered by voters in the San Francisco Bay area, is deeply misguided. We get sugar in our diets from many different sources, some of which we would consider "healthy" foods. 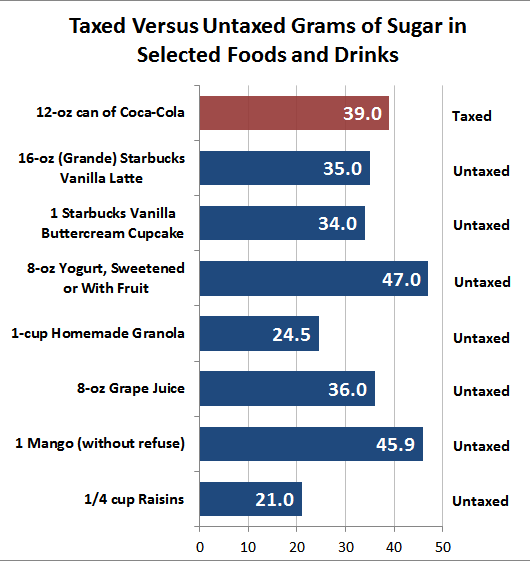 A 12-oz can of Coke has 39 grams of sugar. That's quite a bit. How does that compare to other foods? You might be surprised.

If these food activists were consistent, they would also advocate for a tax on fruit juice, granola, and coffee. But considering that these very same activists are probably vegan, organic food-eating granola-munchers, they're not going to do that. The truth is, moderation is key to a healthy diet and preventing diseases like obesity and type 2 diabetes*. But that simple message is boring, and it doesn't excite nanny state activists.

Furthermore, if proponents of a soda tax were actually serious about reducing diseases related to poor nutrition, they would endorse a public health campaign aimed at raising awareness of the sugar content found in all foods. Or, they might endorse a Pigovian tax on all high-sugar foods. But, they won't do that, either, because it would be widely despised, as people strongly dislike paying large grocery bills. So instead, they demonize Big Soda, which is politically popular.

And that is the very definition of a feel-good policy based on junk science.

*It should also be pointed out that food choices are only one factor among many that determine whether a person becomes obese or develops type 2 diabetes. Genetics, weight, and physical inactivity also play roles.

Unfortunately, the field of nutrition science has often been the victim of pseudoscientific research and practices.

In today's example, the nutrition pseudoscience that argues that only sugary soda beverages should be taxed to deal with the negative consequences of excessive sugar consumption has intersected with the self-interest of politicians who strongly desire to boost both their tax revenues and their power over the communities they govern without much real concern about seriously addressing the public health issues that they are using to justify their policies.

The way you can tell if that's the case is what they do with the money from the taxes they collect. If any part of that money is diverted to other unrelated purposes, such as to pay public employee pensions for example, then it is a safe bet that they never believed the public health problems they said they would solve by imposing such taxes were anywhere near as great as they claimed.

And unfortunately, like the junk science on which such poor public policy is based, you often won't find out until long after the damage has been done.