In the fourth week of October 2016, the S&P 500 ended the week lower than it began, as stock prices also fell from the level at which they closed in Week 3.

But that's not what people will remember about the market close at the end of the week, since the S&P 500 only dropped on Friday, 28 October 2016 in response to what we would describe as a political noise event.

And since politics rarely ever drive stock prices, the market experienced little more than a hiccup in terms of its typical daily volatility. 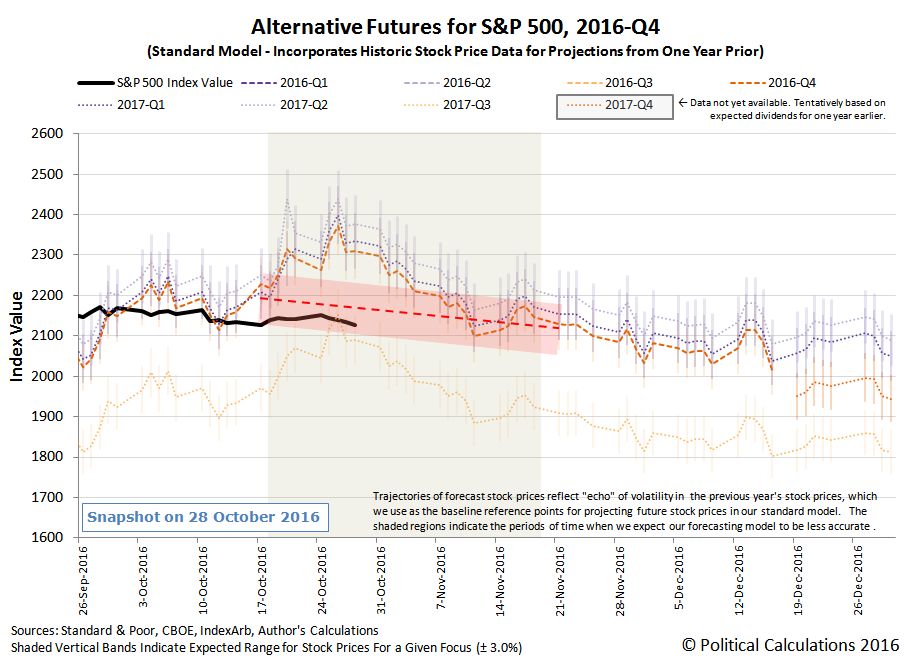 In the absence of other such noise events, or changes in fundamental factors that could more seriously influence stock prices, we can reasonably expect stock prices in the near future to converge with the red-dashed line trajectory we sketched on the chart above two weeks ago. After that happens, stock prices will more likely than not resume their generally downward trajectory, although the only thing we would really expect is that they fall somewhere within the red-shaded range we've indicated on the chart above, consistent with our assumption that investors will continue to focus on the current quarter of 2016-Q4 and will make their investing decisions in accordance with its corresponding expectations.

Although the week was, by far, the busiest to date at this point of 2016-Q4's earnings season, there weren't all that many headlines with market moving potential during the week. The handful that we identified are listed below.

For a more complete picture of the week that was, Barry Ritholtz identifies what he saw as the positives and negatives of the week's market and economic news.