What do investors reasonably expect to be the future of the S&P 500's dividends in 2017?

One way to answer that question is to use the Chicago Board of Exchange's Implied Forward Dividends futures contracts, whose indicated prices represent the amount of dividends expected to be paid out by S&P 500 companies after being weighted according to their market capitalization and then multiplied by a factor of 10.

In the following chart, we've done the math of dividing the indicated prices of the CBOE's dividend futures contracts by 10 to get back to the expected amount of cash dividends per share for the S&P 500 index for each future quarter of 2017 as those futures suggest as of 20 December 2016. As a bonus, the chart also shows what the expected future for the S&P 500's dividends looked like a year ago when 2016 was still entirely in the future. 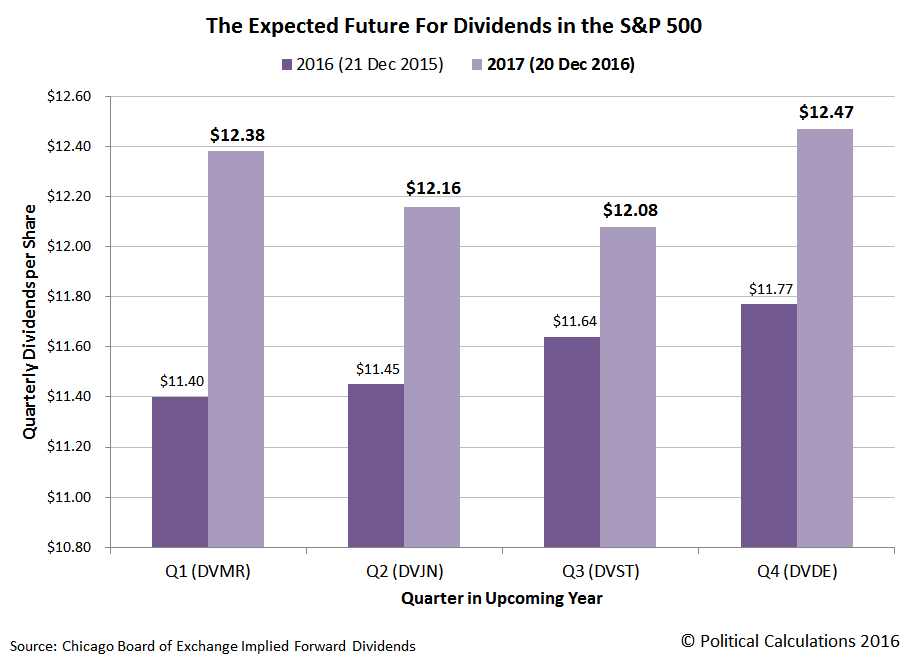 Here are some important things to know about the CBOE's dividend futures:

Looking forward into 2017, the key thing to note is that the dividend futures data indicates a decline in cash dividend payouts from the first through the third quarter of the upcoming year, which is something that was not present in the data that looked forward into 2016 from a year ago. Future dividends are projected to rebound strongly in the fourth quarter of 2017, but that is as far into the future as we can see from our current vantage point in 2016.

What lies beyond that distant future horizon is, as yet, unknown. We won't be able to begin seeing into 2018 until after the dividend futures for 2017-Q1 have run out on the third Friday of March 2017.