Once upon a time, we came up with a empirical relationship between the size of the national debt, the nation's gross domestic product and the nation's population that seems to have some explanatory power for how high the maximum income tax rate in the U.S. is set.

By request, we're revisiting that relationship with the best estimates we have for each of these things for 2016, which we've plugged into the our tool that does the math.


Given the size of the national debt, the nation's GDP and the population, our tool would predict that modern U.S. politicians would set the maximum income tax rate in the U.S. to be about 45%. (If you're accessing this article on a site that republishes our RSS news feed, you may want to click here to access a working version of this tool on our site).

The way to get to that figure is to add up the following maximum tax rates:


In 2017, the payroll tax for Social Security isn't imposed on income earned through wages or salaries above $127,200, so its tax rate of 12.4% for the self-employed (or 6.2% each for employer and employee) doesn't add to their maximum income tax rate for higher incomes. The highest income earners don't get a break however, because the U.S. government more than makes up the difference by imposing higher regular income tax rates on these income earners that kick in at levels above Social Security's cap.

The following chart illustrates the political equilibrium that U.S. politicians have generally followed since the income tax was enabled to go into effect by the 16th Amendment to the U.S. Constitution in 1913. 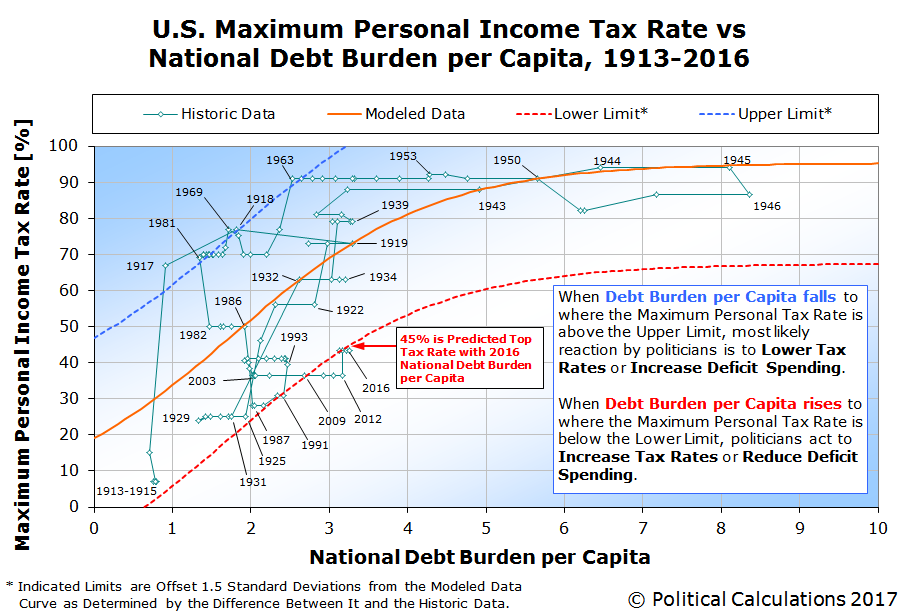 The key thresholds to which to pay attention are the blue-dashed upper limit, which represents the U.S. government gouging American taxpayers so badly that they were forced to back off imposing such high tax rates, and the red-dashed lower limit, which generally represents the equilibrium level at which modern politicians have set the maximum income tax rate over the last 30 years. Too far above the lower limit, recent politicians have acted to cut income tax rates. Too far below the lower limit, politicians have sought to impose higher income taxes to compensate for their having increased the national debt too much to be absorbed by the growth of the economy and the population.

For President Trump, who has indicated a desire to cut tax rates, this tool suggest that he can do so provided that the burden of the national debt declines, which would take significant cuts in planned spending growth, robust growth in the U.S. economy, and also an increase in the size of the population (ideally of working-age individuals), each of which would reduce the nation's debt burden per capita.

The trick for U.S. politicians is figuring out how to achieve each of these things.