Beginning in 2014, millions of lower income-earning Americans became eligible to have fully government-subsidized health insurance coverage through the U.S. government's Medicaid welfare program thanks to the expansion of eligibility for that program provided for by the Affordable Care Act (ACA), which is more popularly known as Obamacare. Unfortunately, that expanded access to health care may very well have caused an increase in death rates due to drug overdoses in the United States to such a degree that the overall estimated life expectancy of Americans has declined.

The influence of Obamacare's expansion of health care provided through Medicaid can be seen by comparing the death rates due to drug overdoses in the 28 states (and the District of Columbia) that chose to expand the enrollment of their state's Medicaid programs with the death rates in the 22 states that chose to not expand their state's Medicaid enrollment as part of the Affordable Care Act in the years before and after its implementation. In the following chart, we've indicated the highest, lowest, average (mean) and median death rates recorded among the individual states that participated in the Medicaid expansion. 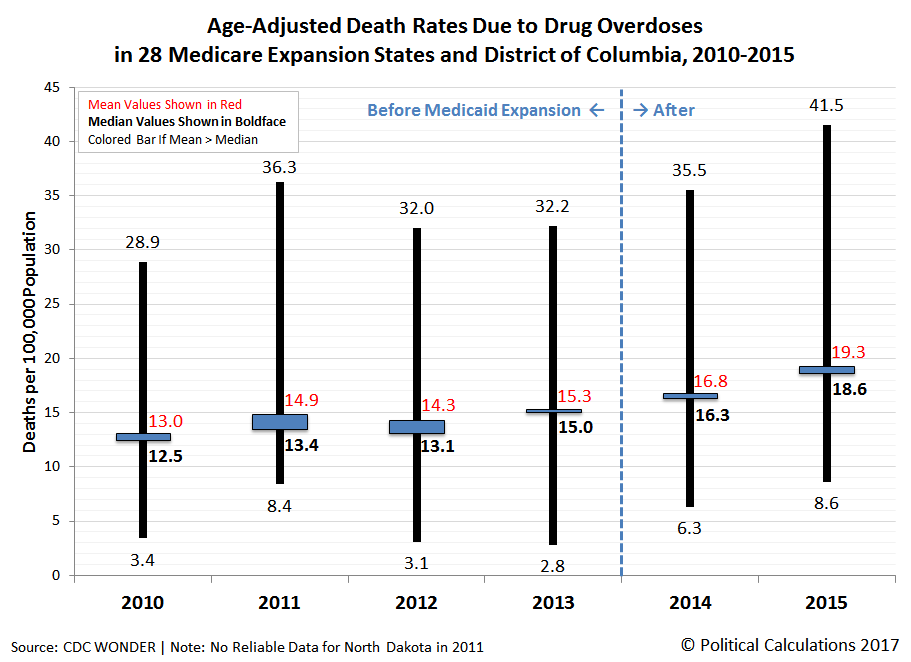 Starting with the lowest death rates per 100,000 population reported among the Medicaid-expansion states, which mostly applies for North Dakota (for which no reliable data was available for 2011, where Iowa's data marks the low end of the scale in that year), we see that the pre-Medicaid expansion trend was essentially flat from 2010 through 2013, followed by a sharply rising trend in 2014 through 2015.

At the high end of the scale, where the data applies for the state of Washington), we see an overall rising trend from 2010 through 2013 (with a spike in 2011, which may be highly relevant in this discussion because Washington was one of six states to implement the early expansion of its Medicaid program in that year), followed by a much sharper increase from 2014 through 2015.

That overall pattern of slowly rising trend in 2010-2013 and much more sharply increasing rate of deaths from drug overdoses after Obamacare's wider expansion of Medicaid enrollments in these states from 2014 through 2015 is also evident in the mean (average) and median death rates recorded among the individual states in this grouping.

But what about the states that didn't expand their Medicaid enrollments as part of the Affordable Care Act? The following chart looks at the similar highest, lowest, mean and median data for death rates per 100,000 population from drug overdoses for these 22 states in the years before and after the implementation of Obamacare. 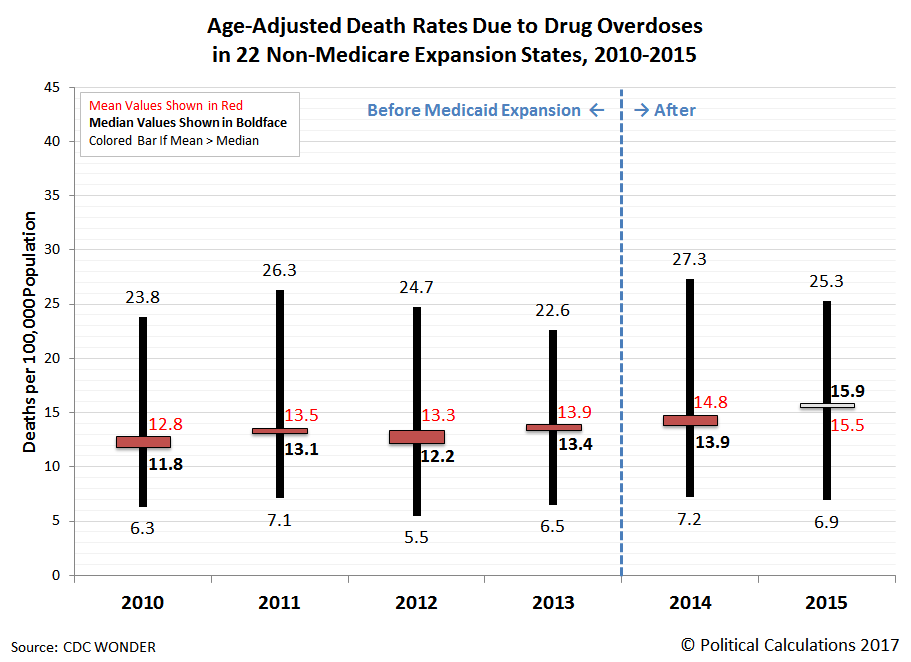 Starting again with the trend for lowest death rates attributed to drug overdoses in the non-Medicaid expansion states in the years from 2010 through 2015, we see here that the trend may be described as being somewhere between flat and slightly rising.

The same observation holds true for the states recording the highest rates of death due to drug overdoses.

In our final chart, we'll use animation to more directly compare what happened between the median and avarage death rates in both groups of states. If you're reading this article on a site that republishes our RSS news feed, you may want to click through to our site to see the animation (assuming you've also enabled JavaScript on your web browser).

At this point, we do need to point out the statistical truism that correlation is not necessarily causation. For instance, it could be that the states that were more likely for economic reasons to experience increasingly higher rates of deaths from drug overdoses perhaps influenced them to choose to join in the Affordable Care Act's expansion of their states' Medicaid programs, where they hoped to cash in on the additional funding provided for Medicaid by the ACA from the federal government.

However, the data does suggest that the practices of the Medicaid program are a significant contributing factor, where the health care provided by the U.S. government is directly responsible for the increase, where we can confirm that both federal and state-level Medicaid officials have been very specifically responding to the increases in drug overdose-related death rates in the U.S. by restricting the prescription of the opioid-based medications at the center of the nation's increase in overdose deaths.

As rates of prescription painkiller abuse remain stubbornly high, a number of states are attempting to cut off the supply at its source by making it harder for doctors to prescribe the addictive pills to Medicaid patients.

Recommendations on how to make these restrictions and requirements were detailed in a “best practices” guide from the federal Centers for Medicare and Medicaid Services....

Some states’ efforts to curtail prescribing predated CMS’ bulletin. But the advisory added new fuel to the trend. States such as New York, Rhode Island and Maine adopted new prescription size limits this year, and West Virginia will require prior authorization starting next year. In the 2016 fiscal year, 22 states either adopted or toughened their prescription size limits, and 18 did so with prior authorization.

The goal is to make physicians think twice before prescribing highly addictive opioids — a change many say is necessary, especially within the state-federal health insurance program for low-income people. After all, research indicates Medicaid beneficiaries are prescribed opioids at twice the rate of the rest of the population, and are at three to six times greater risk of an overdose.

Unfortunately, the problem of the federal government-provided health care programs in contributing to the nation's increase in drug overdose death rates is not limited to the Medicaid welfare program, where similar patterns in increased opioid addiction and drug overdose death rates are being seen among Americans who receive care from the Veterans Administration (VA) and the Indian Health Service (IHS), which are the U.S. government's single payer-style health care programs.

The expansion of "free" health care provided for by the U.S. federal government through these programs and through Obamacare's expansion of the Medicaid welfare program may very well have backfired by contributing to the nation's increase in drug overdose death rates and the decline in American life expectancy.