How much money is the City of Philadelphia collecting from its controversial soda tax? And how does that compare with the amount of money was Philadelphia's mayor and city council counting on collecting from their excise tax on naturally-sweetened, calorie-laden beverages and artificially-sweetened, diet beverages being distributed to the city's grocery and convenience store retailers?

If we go by the claims of the city's officials, they're collecting more revenue than they expected.

For the second consecutive month, the city's Department of Revenue announced the funds collected from the Philadelphia Beverage Tax brought in more money than its projections predicted.

The Revenue Dept. said February yielded $6.4 million in soda tax revenue, and also upped the initial figure for the first month of the year to $5.9 million from $5.7 million, an anticipated adjustment.

The Mayor's Office estimated soda tax revenue in February to amount to $6.3 million, according to the Kenney Administration's budget proposal.

At a total of $12.3 million in revenue collected so far, the beverage tax does not appear to be deterring consumers at the rate that city officials expected nor at the levels Pepsi and others claim.

Back on 15 February 2017, Philadelphia's City Manager Anna Adams indicated that the city would only take in $2.3 million from the soda tax during the entire month of January, which proved to be far below the $5.7 million that it was initially reported to have collected just a week later. That latter figure proved to be just under 97% of the final revised revised figure of $5.9 million that was reported on 23 March 2017.

Given those latter two numbers, that $2.3 million looks like Philadelphia's city manager was playing the same kind of deceptive shell game that corporate CEOs do with deliberately lowballing their company's earnings estimates to make their actual earnings appear better by comparison.

But is that the game that Philadelphia's public officials are playing?

To find out, we would need to know much money that the City of Philadelphia could legitimately have expected to collect through its soda tax in January 2017, and to determine that value, we would need to have a good idea of the quantity of beverages that would be distributed to be sold in the city during that month.

The Philadelphia Inquirer has previously reported that for Philadelphia's new soda tax to perform as the city's officials desire, the city would need to collect an average of $7.7 million per month from the shipments made to the city's beverage distributors.

But, as we recently demonstrated, the actual total value of shipments by beverage manufacturers follows a very regular and very predictable seasonal pattern. That is an important bit of information for two reasons: 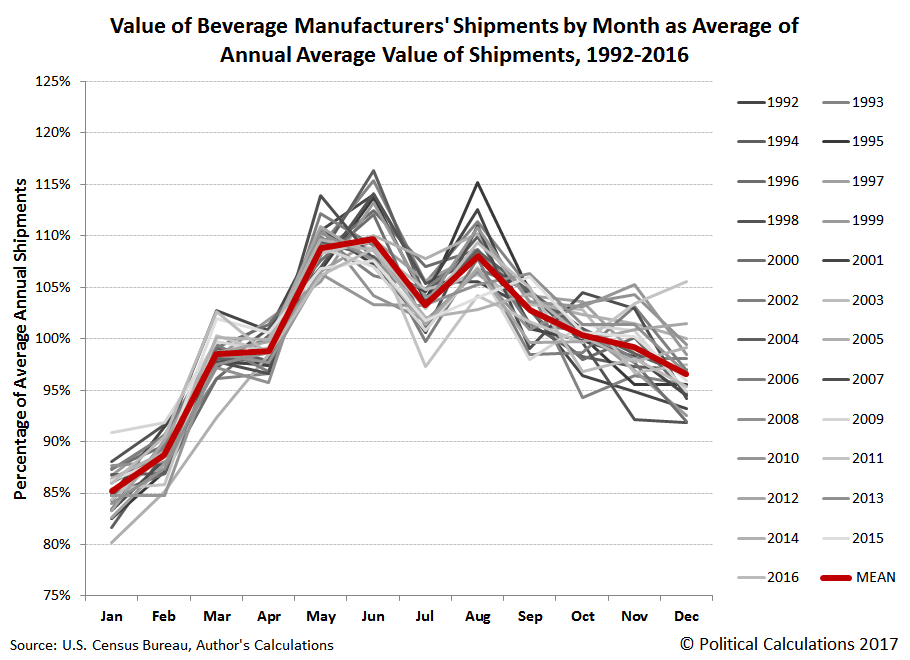 Our next step will be to visualize how that seasonal pattern would translate into a reasonably approximation of the amount of tax revenue that the city might collect each month from its new soda tax. The following chart reveals what we discovered when we plotted those desired tax revenue levels with respect to the city's actual monthly soda tax collections to date. 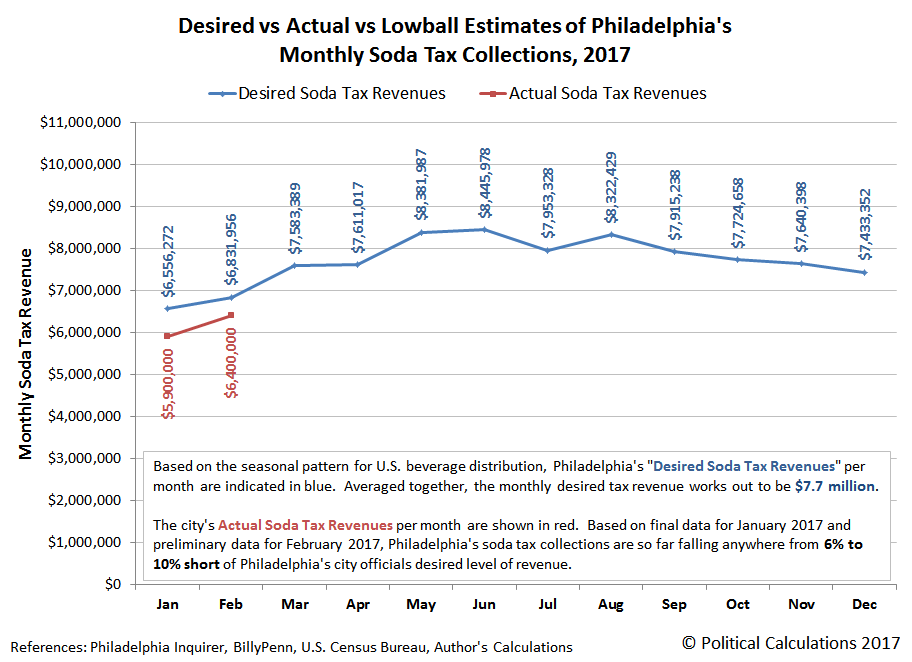 Based on the seasonal pattern for U.S. beverage distribution, Philadelphia's "Desired Soda Tax Revenues" per month are indicated in blue. Averaged together, the monthly desired tax revenue works out to be $7.7 million. This is the data that corresponds to what Philadelphia's city officials expect to collect from the city's soda tax.

The city's Actual Soda Tax Revenues per month are shown in red. Based on final data for January 2017 and preliminary data for February 2017, Philadelphia's soda tax collections are so far falling anywhere from 6% to 10% short of Philadelphia's city officials desired level of revenue.

Going back to the seasonal pattern data, one factor that we're not taking into account is actual temperature. Since beverage consumption is influenced by temperatures, where greater quantities of beverages are consumed during months characterized by higher temperatures, Philadelphia's weather may affect the city's soda tax collections. That may indeed be the case for February 2017, which was unusually warm in Philadelphia, with average temperatures more than 9 degrees Fahrenheit (5 degrees Celsius) above the month's typical temperatures.

Given its track record to date, in a funny way, Philadelphia's city officials may be counting on global warming to get the tax revenues they desire from their new soda tax!