For the S&P 500, the first week of March 2017 was about as eventful as it could be thanks to a strong attempt by Fed officials to shape future expectations ahead of their two-day meeting beginning on 14 March 2017. We would argue that through their concerted efforts, they succeeded in shifting investors to focus upon 2017-Q1 instead of 2017-Q2 to coincide with the timing of their next rate hike.

Alas, because the expectations for changes in the rates of dividend growth for the current quarter of 2017-Q1, which still has a few weeks left in it, and the upcoming quarter of 2017-Q2 are nearly identical, that shift in focus didn't do much to significantly affect the level of the S&P 500, which continued to track along near the bottom of the likely range that our dividend futures-based model has projected for the two quarters. 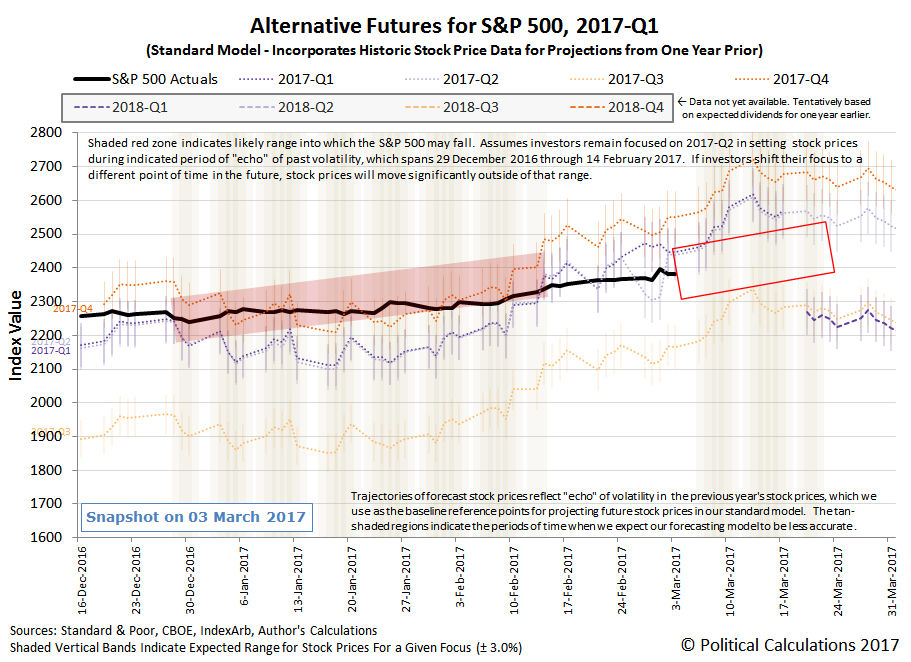 Last week was also interesting in that we had an anomaly that affected the CBOE's dividend futures contracts for 2017-Q1 (DVMR) and 2017-Q2 (DVJN). On Monday, 27 February 2017, the value of 2017-Q1's dividends per share increased by 3.5 cents to $12.70 per share, while the value for 2017-Q2's dividends per share decreased by the same amount to $11.83 per share. The anomaly then lasted until Thursday, 2 March 2017, when the gap between the forecasts for both quarters closed up once again. You can see the effect that these seemingly small changes had upon our dividend futures-based forecasting model for the trajectories shown for both 2017-Q1 and 2017-Q2 during the past week in the chart above.

We suppose that should teach us to not complain about the two values having otherwise been nearly identical since mid-January!

We recognize this change as an anomaly, first because it soon evaporated within a matter of days, and second, because stock prices didn't respond as our theory would suggest for investors suddenly shifting their forward looking focus from 2017-Q2 to 2017-Q1 during the last week. Had it been the real result of a significant change in expectations for the future for dividends, the upward movement for 2017-Q1 coupled with the sudden investor focus on the quarter would have sparked a much larger rally in stock prices.

But because it was just an anomaly, the shift in focus from 2017-Q2 to the nearer term future of 2017-Q1 didn't cause stock prices to move very much on the week, where the jump upward that occurred on Wednesday, 1 March 2017 wasn't repeated over the following days.

Still, that very limited Lévy flight did spark some useful observations into the nature of the mechanics that can drive such large, sudden upward movements in stock prices [hint: it wasn't the reaction to President Trump's speech on Tuesday evening]. If you haven't seen Nigam Arora's description of what really drove the market's action on 1 March 2017 yet, put it on your reading list - it's absolutely essential reading!

As for what else happened during Week 1 of March 2017, here is our list of the more significant headlines that influenced investors during the week that was.

Elsewhere, Barry Ritholtz recalls the positives and negatives for the U.S. economy during the trading week that ran through Friday, 3 March 2017.

That's enough for this week. In next week's edition, we'll explain what that red box sketched on the chart above signifies.