In June 2017, sales of naturally and artificially-sweetened beverages in Philadelphia subject to the city's plummeted to be more than 40% below their estimated pre-tax quantities.

That wasn't what Philadelphia's political leaders were expecting to happen, where the following chart shows how many millions of ounces of sweetened beverages were estimated to have been sold in Philadelphia in each month before the city's controversial beverage tax took effect in January 2017, how many ounces city officials expected to be sold after the tax went into effect, and finally the actual quantity of sweetened beverages subject to the city's tax in its first six months of existence. 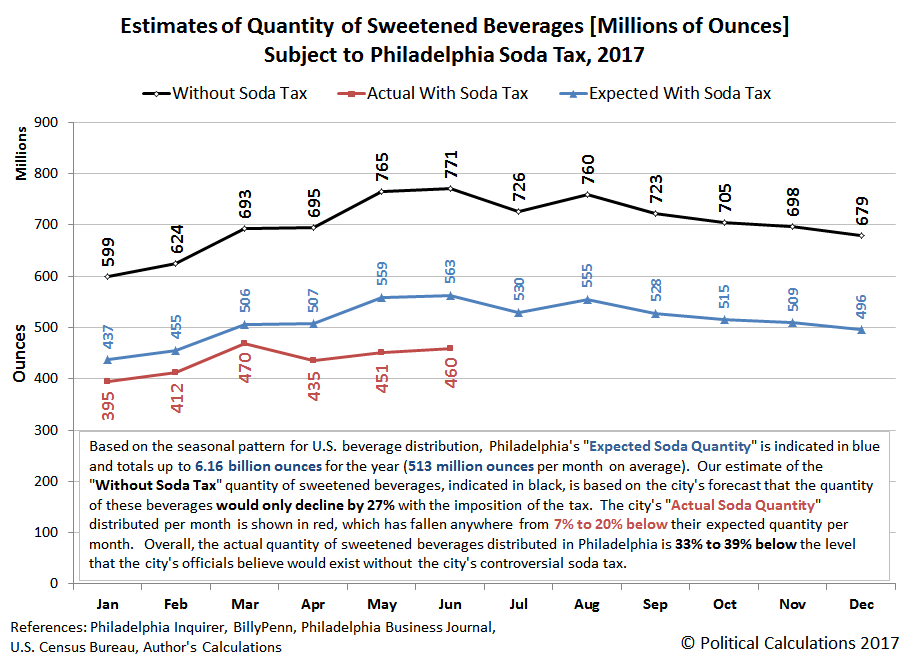 Even though months of actual data were shouting that Philadelphia Beverage Tax collections were falling short, it wasn't until 13 June 2017 that city officials finally acknowledged that the depressed sales of sweetened beverages subject to the city's new beverage tax would result in the city missing its $46 million revenue target for the tax in its first six months of being in effect. The city subsequently moved the goalposts for its first six-months estimate to $39.7 million later in the month.

We can now confirm that Philadelphia appears set to miss that lowered mark by several hundred thousand as well, where data recently provided by the city after the 20 July 2017 payment date for beverage taxes imposed through the end of June 2017 indicates it will have collected just $39.3 million in the first half of 2017. The following chart shows our estimate of the amount of revenue that Philadelphia city officials would have reasonably expected to collect each month from the beverage tax based on the seasonal pattern for soft drink distribution in the U.S. along with the amount the city has reported collecting in the tax' first six months of being enforced. 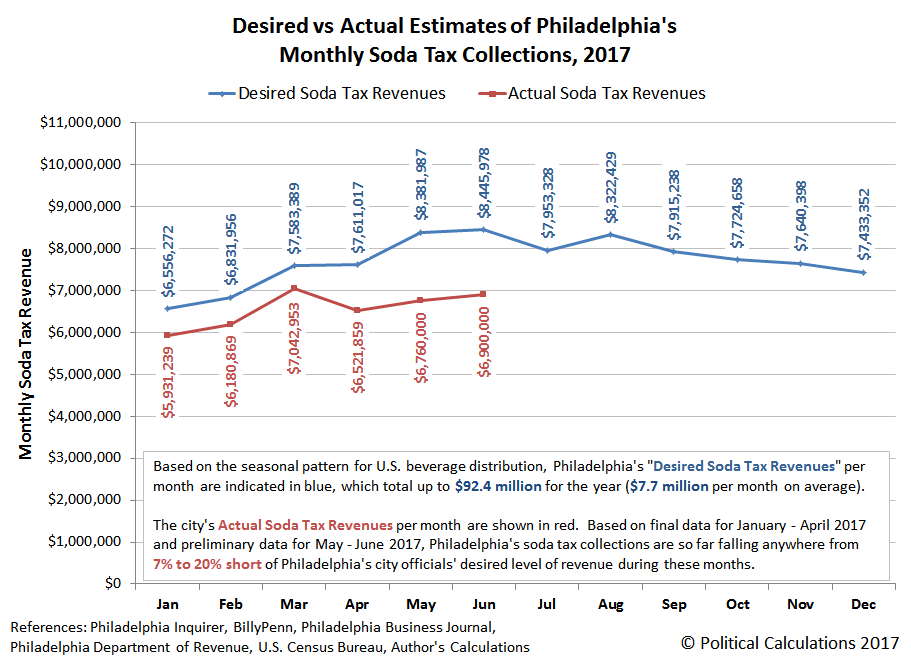 The sad part is that June is typically the peak month for soft drink distribution in the United States, which then typically remains elevated through August each year, before entering a steady downtrend as seasons change from summer, to fall, and then to winter. If the volume of soda being distributed in Philadelphia in June 2017 is any indication of where those sales will reach their typical seasonal peak in 2017, we anticipate that the city can expect that severe shortfalls in its expected beverage tax collections will persist over the next several months.

As recently as 18 July 2017, city officials would appear to be in severe denial of that reality. Here is a report noting the view of the Philadelphia Beverage Tax by the Pennsylvania Intergovernmental Cooperation Authority (PICA), who recently reviewed and approved the city's budget for its 2017-2018 fiscal year, which captures the reaction of Philadelphia's City Finance Director, Rob Dubow, which can be taken as a direct indication of the mindset of Philadelphia Mayor Jim Kenney and Philadelphia City Council members (emphasis ours):

The new sweetened-beverage tax also received some criticism. PICA staff said there is financial risk associated with the $92 million revenue estimate for the beverage tax.

“In particular, there is uncertainty related to the size of the tax base, the impact of the tax on consumption, and the rate of enforcement,” the staff wrote, noting that in the first six months of the tax, the city lowered its initial projection of $46 million to $39.7 million. City officials said the slow start was due to the transition implementing the tax and “seasonality,” meaning that people consume more soda during the summer months and during the November and December holiday season.

Based upon all our observations to date, we can say with some confidence that no, the city will not make the $92 million mark for the full calendar year of 2017, nor will it make the mark over its fiscal year from July 2017 through June 2018. Absent significant inflation, subsidy, or other compensating factor, it will instead fall well short of that mark.

The next question that Philadelphia's city leaders will have to address is who is going to be disappointed because it will fall short of its revenue estimates and won't be able to pay everything that they've promised to pay with the beverage tax proceeds. Will it be the families of the remaining 4,500 of the 6,500 children who were promised their kids would be enrolled at no cost in the city's new all-day pre-K program? Will it be the "massive Philly parks and recreation upgrade" that the city's voters were promised? Or will it be city employees, including policemen and firefighters, whose unions are looking for raises like the ones that other city employees got last year just after the city first passed its beverage tax?

Or better yet, will it be some combination of all three or some other beleaguered interest within the city? Stay tuned!

The Philadelphia Beverage Tax is facing legal challenges that are currently working their way through Pennsylvania's state courts. However, we think there may be a valid federal case against it, the litigation for which has yet to begin, which will impact other cities that have either implemented similar taxes or are considering doing so.