In January 2017, Philadelphia imposed a 1.5-cent-per-ounce tax upon all naturally and artificially sweetened regular and diet beverages distributed for retail sale within the city. Through June 2017, the city has failed to hit any of its monthly revenue collection targets for the tax, which has fallen anywhere from 7% to 18% below its desired revenue levels in each month of the year to date. The following chart illustrates just how far short those revenue collections have been through the first six months of 2017, where the biggest shortfalls have occurred in months that should be seeing the greatest revenues. 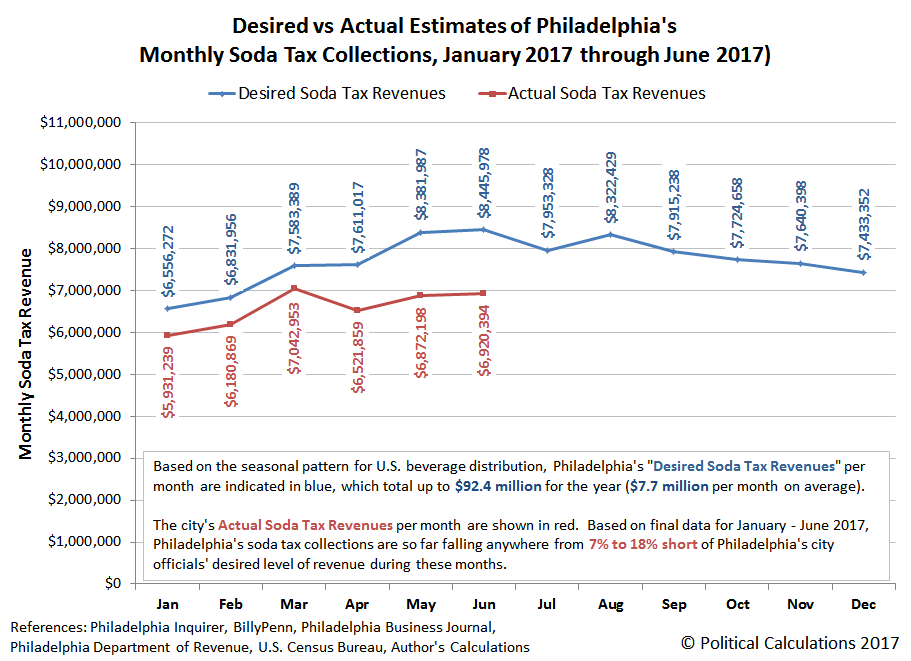 In the chart above, the upper blue line represents an estimate of the amount of revenue that Philadelphia would need to collect each month to achieve its annual revenue target of $92.4 million. The lower red line represents the city's actual tax collections from its controversial beverage tax in each of the first six months it has been in effect.

Last month, Courtney Shupert and Scott Drenkard of the nonpartisan Tax Foundation made some pretty startling claims in discussing the failures of Philadelphia's controversial soda tax, where they suggested that because the city's soda tax was so high, it might actually be encouraging Philadelphians to drink more alcoholic beverages. Here are some key excerpts from their analysis, aptly titled "Soda Tax Experiment Failing in Philadelphia Amid Consumer Angst and Revenue Shortfalls":

The tax, which is 24 times the state excise tax rate on beer, has received mixed reviews among constituents. Some Philadelphians support the tax for the programs it funds. Meanwhile, local business owners and workers have filed lawsuits against the tax....

Purchases of beer are also now less expensive than nonalcoholic beverages subject to the tax in the city.15 Empirical evidence from a 2012 journal article suggests that soda taxes can push consumers to alcohol, meaning it is likely the case that consumers are switching to alcoholic beverages as a result of the tax. The paper, aptly titled From Coke to Coors, further shows that switching from soda to beer increases total caloric intake, even as soda taxes are generally aimed at caloric reduction.16

That brings up an interesting question: Are Philadelphia's "angst"-filled consumers increasing their alcohol consumption now that it has become relatively more affordable than it was before Philadelphia's tax on sweetened soft drinks went into effect?

In what might be the first confirmation that particular kind of substitution is indeed taking place, we found evidence to suggest that is the case in Philadelphia's liquor tax collection data, which is used to provide funds for the city's school district. The following chart shows what we found when we tallied the trailing 12 month total for Philadelphia's 10% tax on the sale price of all alcohol beverage sold within the city. 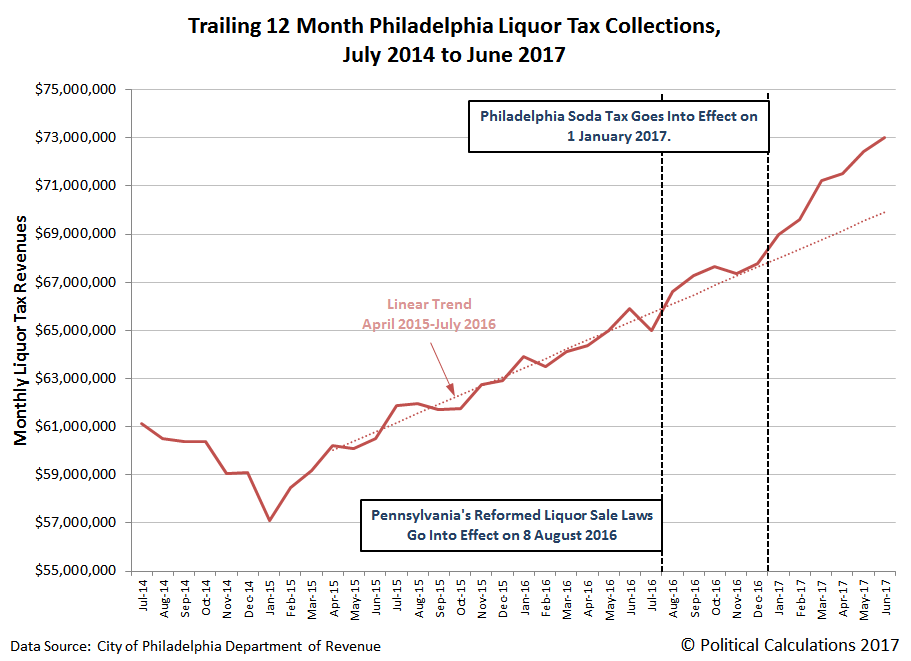 In this chart, we see that the trailing year total of Philadelphia's liquor tax collections followed a very steady upward trajectory from April 2015 through December 2016, a period that included the implementation of reforms in Pennsylvania's liquor sale laws, which enabled more alcohol beverages like wine to be purchased at retailers that already were selling beer outside of state-owned liquor stores, which took effect in August 2016. Despite that change however, Pennsylvania's government-owned liquor stores still dominate the market for alcohol sales, setting fairly uniform retail prices for alcohol-based beverages throughout the state.

That began to change in January 2017 however, when the city's liquor tax collections began to significantly increase above that established trend, a change that directly coincides with the implementation of the city's tax on sweetened beverages. The city went on to end its 2017 fiscal year in June 2017 having collected at least $3 million more from its alcohol beverage sales tax than would have been expected from the pre-soda trend established for its liquor tax collections.

That in itself isn't enough to confirm that the effect of Philadelphia's sweetened beverage tax in raising the relative price of soft drinks in the city to be more directly competitive with alcoholic beverages, so we went the extra mile and looked at a similar alcoholic beverage sale tax that applies on the opposite end of the state, in Allegheny County, which falls within Pittsburgh's metropolitan area. The following chart reveals what we found for the same period of time. 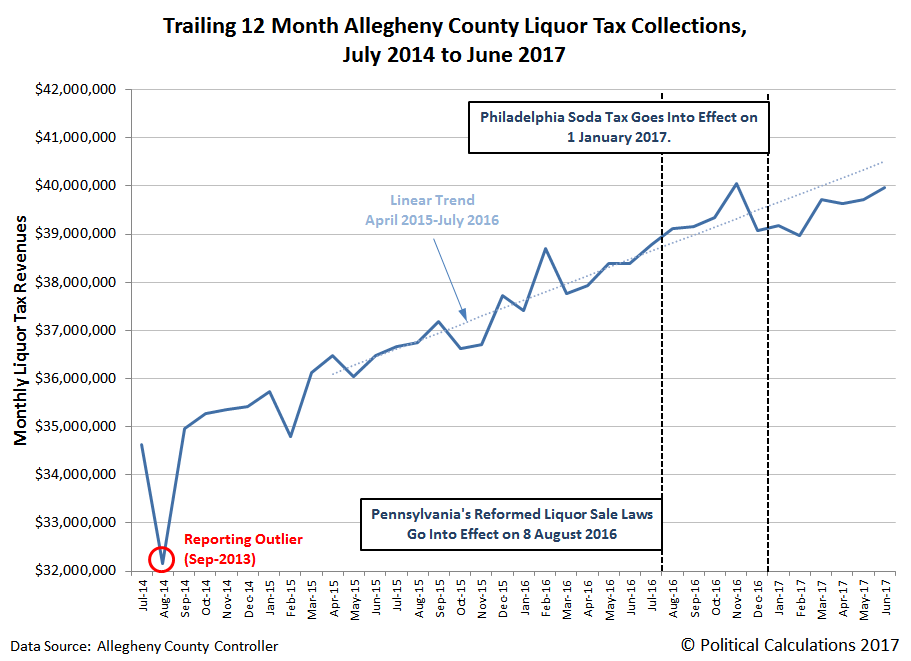 Here, we find that the trailing 12 month totals for Allegheny County's alcohol sales tax collections are not seeing the same kind of rising trend that Philadelphia's alcohol beverage sales tax collections have seen since the latter city's soda tax went into effect. Instead, we see that it dropped below that region's established trend in December 2016, but has paralleled the trend in the months since.

There are other confounding factors to consider, such as the relative economic growth in each regiun, where Philadelphia has increased its trailing 12 month average employment by just 5,000 since the end of 2016 as its employment growth has slowed in 2017, while Pittsburgh's employment level has been flat-to-lower over the same period of time.

In Philadelphia's case however, that relative employment growth is not sufficient to explain the sharp growth of the city's alcohol tax collections that have been realized since its soda tax went into effect. We think that the most likely explanation for that change is that the city's consumers are increasingly substituting alcohol beverage purchases for soft drinks now that their prices have become more relatively competitive with them.

It will take more work to untangle the various confounding factors, but the data we have available today strongly suggests that Philadelphia's soda tax is succeeding in driving consumers in the city to drink more alcohol than they were willing to drink before the soda tax made so many non-alcohol soft drinks much more expensive than they had been.

It's just a good thing that apparent increase in alcohol consumption in Philadelphia is not so far leading to more drunken driving incidents thanks to ridesharing apps!